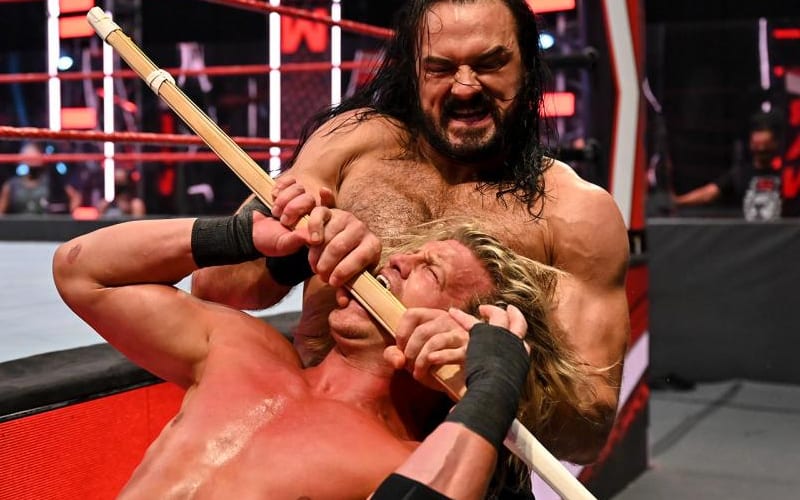 WWE promoted Drew McIntyre vs Dolph Ziggler in a WWE Title match all week. Then they changed the match a couple of days prior to RAW. There was reason they did this, because they already taped things that would have made that title match a moot point.

It was explained during Wrestling Observer Radio (transcription by Ringside News) that WWE already taped parts of RAW that referred to Randy Orton vs Drew McIntyre at SummerSlam. To put the WWE Title on the line wouldn’t have made sense after those mentions of Drew vs Randy at the biggest party of the summer were made.

“Last week one of the segments was going to be Randy Orton going for the title, but it was torn up. Obviously, it was torn up because they were going to do the title match at the next show and they talked about the title match on this show. Then within an hour they decided that they just wanted to make sure that the Orton/McIntyre match was promoted this week because they didn’t promote it last week originally, they delayed it a week, but they promoted it before that [Ziggler] match and [Orton] was directly challenging McIntyre, not the winner so it was a fact because they were doing it that way they had to do it a non-title match.”

If Randy Orton would have been more ambiguous about who he was facing at SummerSlam, then it would have been a different story. He straight-up called out McIntyre which cause a Ziggler WWE Title match to not make sense. This is why they changed their minds on that title match.

In the end, it wouldn’t have mattered either way because the King Of Claymore Country still reigned supreme.

Thanks to Wrestling Observer Radio with transcriptions by Ringside News