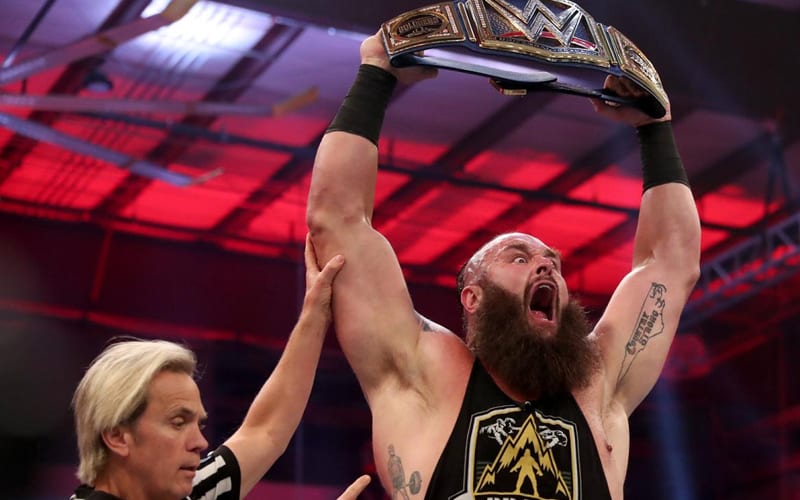 Roman Reigns didn’t work WrestleMania and WWE needed to figure out someone to face Goldberg. The show of shows promised a Universal Title match and Goldberg needed to drop the title so they called Braun Strowman.

While speaking to Sports Illustrated, The Monster Among Men revealed that he was across the country when WWE called him about their changed Mania plans. He wasn’t even booked for the show in the first place.

Strowman told whoever called him that he was in Wisconsin at the time. Before he finished his next sentence WWE revealed that a jet was on the way.

“I was told, ‘There’s been a change, we need you.’ I said, ‘Well, I’m in Wisconsin. How am I getting there?’ Almost before I finished saying that, I was told there was a jet in the air that was landing in a few hours for me.”

He was back in Orlando by that evening, and he had a big day ahead of him. Strowman didn’t even know that Goldberg was his opponent until he got to the Performance Center.

“I was in bed by midnight in Orlando, then at nine the next morning I was at work being told that I was facing Goldberg at WrestleMania for the Universal Championship. All I could think was, ‘Let’s go.”

Braun Strowman is still the Universal Champion, but a feud with Bray Wyatt has yet to come to a close. We’ll have to see how things turn out for The Monster Among Men. His first Universal Title reign was certainly unexpected.

What do you think about Braun Strowman’s Universal Title reign so far? Sound off in the comments below!