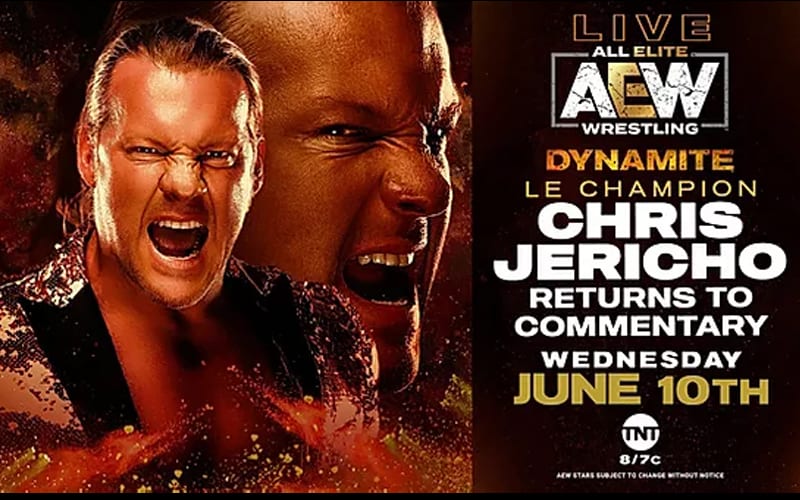 Welcome to Ringside News’ live coverage of AEW Dynamite. Keep checking back throughout the night for constant updates. The show starts at 8:00 PM EST so check back then when we get going.

Chris Jericho will be on commentary this week. That might be a big selling point but a few matches have been announced as well.

Cody Rhodes will defend the TNT Title against Private Party’s Marq Quen. Fenix was supposed to be in that match, but he still can’t work a match. This will be a big opportunity for Quen.

FTR will make their in-ring debuts for AEW this week. The Top Guys are taking on The Butcher & The Blade.

Jericho wasn’t on commentary to start out. Then they introduced him. He brought out the baseball bat named Floyd. Jericho was pumped to be there.

FTR vs Butcher & The Blade

FTR used their black truck in their entrance. They were in all black gear, too.

They called FTR the hottest free agents in pro wrestling playing off the story that they have a handshake deal with Tony Khan.

They started out with Dax and Blade. Plenty of people were in the crowd watching like Jake Roberts, Tully, Shawn Spear, and Lance Archer all watching FTR intently.

Dax got a headlock and was backed into the ropes. Blade and Dax traded chops and then they hit some forearms before Dax hit two shoulder blocks and then Blade kicked out of two roll-ups. They got applause when standing up.

Jim Ross brought up how FTR are holding onto the tag team rope and Jericho loved how they are following the rules. He suggested that FTR stands for “Follow The Rules.”

Dax and Blade continued until Butcher took a tag. Then Cash came in, but the referee backed them up. “FTR” chants broke out as Cash tagged in.

Butcher charged Dax, but he jumped to the floor and grabbed Butcher’s leg so Cash could attack him. Then Cash hit a dropkick off the ropes on Butcher, but he didn’t drop Butcher. Cash sold his shoulder like it was hurt, but he lured him in and rolled him up for a two count.

Butcher tagged Blade. The referee was distracted and Butcher choked Cash. Then Blade kicked Cash a bit and tagged Butcher back in. Cash Wheeler continued to sell as Blade tagged back in.

Cash hit a powerslam on Blade after Dax was taken off the apron. Then Harwood jumped up and took the hot tag. Dax took Butcher down with some strikes, dropkicked Butcher, and continued to work on Blade complete with a brainbuster.

Then Dax put Blade on the top rope, but he fought off. FTR grabbed Butcher and hit a double hanging DDT followed by Dax hitting a superplex on Blade followed by a flying elbow drop by Cash from the top rope. 1-2- Kick out.

They continued and Dax kicked out of a devastating move from Butcher. Then Cash took a tag and they hit a double spike piledriver for the win.

They cut an interview afterward and The Young Bucks came out. Nick congratulated them on a great match. Matt thanked them for helping them out a couple of weeks ago. They also didn’t introduce themselves.

Matt said the Young Bucks have been carrying tag team wrestling on their backs for the past decade and a half.

Butcher jumped The Bucks and FTR brawled with Butcher and Blade. Kip Sabian & Havoc jumped in and Kenny Omega ran out followed by Adam Page.

The segment ended after things calmed down.

The Natural Nightmares cut a promo backstage. They have a tag title match next week. Dustin was trying to get him to concentrate on something other than Allie.

The heels rushed the babyfaces before the bell. Then Hikaru Shida was kicked out of the ring while they beat Kris down in the corner.

Statlander kicked Ford and ran Nyla into her. Then Penelope left and Kris hit a single leg dropkick to the head for a two count. Rose was put in the buckle and Hikaru Shida tagged in and out with Kris as they traded moves on Rose. Kris went to the top and missed a dropkick. Rose started taking advantage as they went to commercial.

Rose continued her abuse through the break and then Statlander nailed a kick. Rose crawled to her corner. Then Ford and Shida were tagged in.

Shida took the fight to Ford as the crowd chanted “Holy Shida!” She hit a top rope missile arrow. Then a falcon arrow, but she changed direction.

Then Shida took the tag again. She tried to hit a falcon arrow, but Rose reversed and she placed her over the top rope. She did the same to Kris and nailed a leg drop off the top on both of them.

Then Penelope Ford nailed a bridging suplex pin after whacking Shida with the title for the win.

Darby Allin was in a video with Tony Hawk. Check out some of that footage here.

Then they played a promo for Dr Britt Baker.

The Inner Circle jumped the babyfaces early on. Trent was left in the ring as Orange was throw up the stage by Jake. Then he left him laying.

Trent took abuse from Santana with chops and other strikes as they moved from corner to corner. Then Santana kicked him in the face. He went for a tag, but Trent nailed him with a kick to the head. Then Ortiz took the tag and he slapped Trent down.

Trent was able to tag Chuck. Then Trent nailed a dive on Hager before hitting Ortiz. This was followed by the Best Friends gearing up for a hug in the ring, but Hager jumped them.

Hager nailed a Vader Bomb, but Jericho called it a Hager Bomb. They continued to dominate the “stupid Best Friends” as Jericho put it as they went to commercial.

Orange took a tag when we came back and he stood up to Hager. Orange nailed some weak kicks before Hager tossed him. Then Orange sent Hager out. Santana and Ortiz tried to jump him, but he hit a double rana followed by a suicide dive on Hager then a top rope dive on Ortiz followed by a tornado DDT on Santana. He jumped off the top on Hager, but he was caught and slammed down.

Santana hit a cannonball onto Orange off Ortiz. They set Cassidy up for a double team move, but it was stopped. Then Orange rolled Ortiz up for the win.