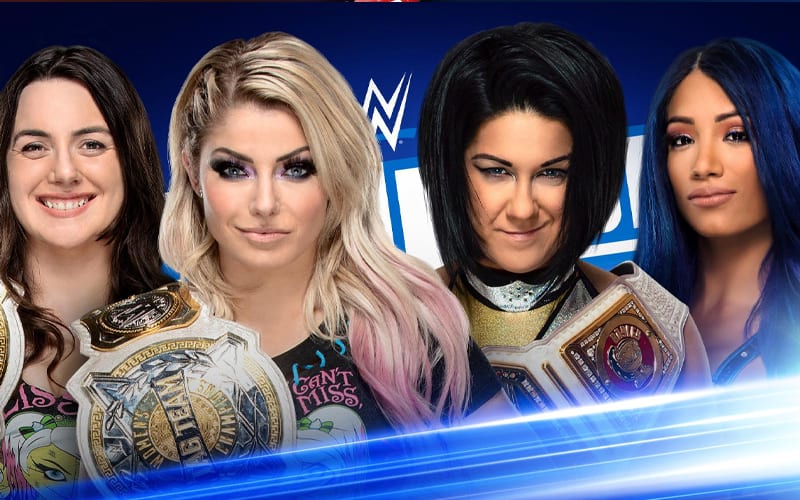 Tonight’s episode of WWE Friday Night SmackDown will get fans one step closer to Backlash on June 14th. There is also a title match in store for fans.

Alexa Bliss and Nikki Cross will put the WWE Women’s Tag Team Titles on the line against Sasha Banks and Bayley. That match could get interesting as Bayley and Banks try to start their second reign with those belts.

Jeff Hardy is set to address what happened during that DUI angle last week. He wasn’t really drunk in the first place apparently.

Daniel Bryan and AJ Styles will also have a face-to-face before their IC Title match.

The Miz and John Morrison are also expected to further taunt Braun Strowman before their handicap match for the WWE Universal Title at Backlash.

More is expected, we’ll just have to see what happens. You can check out the official preview from WWE below.

Jeff Hardy was shown backstage and he was looking much better than this time last week. Then they showed a promo from last week’s show and Hardy’s angle.

Jeff Hardy came out to start the show. Cole said that Elias has a torn pectoral muscle and he’ll miss a couple of months of action.

Hardy thanked WWE for giving him a chance to get this off his chest. He said that last week was chaos and Elias “luckily walked away with serious injuries that could have been a lot worse.”

Then Hardy proceeded to tell us his side of the story. He pulled into the PC parking lot and then he was hit with what he said felt like an anvil. The next thing he knew he was waking up as cops grabbed him, cuffed him, and he reeked of alcohol. He saw everything slip away as the handcuffs ripped at the skin on his wrists.

He wondered how he could explain this to his family and how many more times he can beg for forgiveness. Jeff said he’s in WWE for a reason and it’s all good. Then he said it’s good to know that even though his head was spinning, he did not slip last Friday.

He passed every sobriety test and eye witnesses said they saw the man run from the car and he had a red beard and red hair. Wonder who that could be?

Sheamus came out as Hardy called him out. The Celtic Warrior called Hardy “Fella” and said he always has an excuse for his actions. Sheamus said that Hardy’s fans are enablers and he said “for once in your life be a man and admit to what you did.”

Then Sheamus said “you’re not a man, just a junkie.” Wow. Hardy took off his shirt and was ready to fight. Sheamus said Hardy shouldn’t worry about disappointing his family because they’re used to is. Hardy charged Sheamus and then he got a Brogue Kick.

Sheamus proceeded to bounce Hardy off the hockey boards all the way down the ramp.

Otis and Mandy were shown backstage and Otis put on King Corbin’s crown and walked off. Corbin showed up and he was very upset about Otis taking his crown. They’re facing each other next.

Corbin was pissed because he didn’t have his crown. He rushed the ring and they got going.

King Corbin posted Otis and then Otis moved and Corbin missed a clothesline. Otis put Corbin outside and then he did it again as Corbin ran back in.

Corbin then ran Otis against the apron and the ring post. They returned to the ring and Corbin hit a spinebuster for a two count.

Corbin laid in some body shots as Corey Graves wondered what kind of pain Otis feels from those. Then Corbin punched Otis down and tried to get a headlock, but Otis fought out of it.

Corbin kicked Otis a couple of times before Otis started rallying with clotheslines and 2 throws. Otis smashed Corbin in the corner and went for the Caterpillar, but Corbin rolled out of the ring.

Then Corbin hit Otis with a chair and caused a DQ.

They continued and Otis avoided a chair shot then he knocked him down and hit a Caterpillar anyway. So he and Mandy Rose celebrated.

The Miz said everyone knows how to deal with annoying co-workers. They made fun of people who say they won’t be able to beat Strowman at Backlash. He said that Strowman shouldn’t have a care in the world. Morrison said “that’s about to change.”

Then they said that they’re going to make Strowman’s life a living hell. They showed Strowman and they made his thermos erupt with water by rigging. Strowman was mad and he left without cleaning up the mess.

Shorty G was about to cut an Interview with Kayla Braxton. Then Mojo Rawley was suddenly there. He said his Boy Gronk got robbed of the WWE 24/7 Title. Then he said G’s interview was getting cut “short.” Suddenly, G turned around and there was Shinsuke Nakamura and Cesaro. They took a shot at him and Kofi & Big E ran in for the save.

Evans didn’t even get her entrance. Deville rushed her and shoved her into the stairs.

They got going after the commercial. Sonya took Evans down with a waistlock and then she broke up the hold and they got back to their feet. Evans was shot to the buckle and she jumped on the apron. She knocked Sonya down and did a slingshot elbowdrop from the apron.

Deville answered back after an Irish Whip to the corner with a boot to regain control. She choked Lacey with the ropes and landed some kicks.

Lacey Evans kept selling as Deville continued to torment her with kicks. Evans fired back and put Deville in the turnbuckle and then walked her out to the apron where she landed some knees to the head and a roll-up pin that hit the referee. Then the referee ended up in the line of fire and he sold his injury. People started to run out as we cut to commercial. It was awkward.

The referee was injured and replaced. Sonya Deville took control and did so with brutality.

They moved to the floor where Deville whiplashed Evans off the apron to the floor. Then Sonya Deville stood on Evans’ neck on the ring steps.

They continued as Sonya continued her abuse, but Evans kept kicking out. Then Mandy Rose appeared on the screen and distracted Sonya. Evans took advantage and picked up the big win.

They aired a Matt Riddle promo.

Braun was interviewed by Kayla and Miz & Morrison were shown in their van. They accidentally poured green slime all over her instead of Braun. “Those bastards!” she said before walking off covered in green slime.

Styles and Bryan hyped their IC Title match that they have already filmed. Styles said he’s a champion and Bryan is a”all heart.” It’s not a bad thing — it’s noble, but it’ stupid.

Bryan said they’ve known each other a long time. They have two different worldviews and different visions of what it means to be IC Champion. Bryan said that AJ Styles is a coward because he can’t stand to see someone beat him and shatter the vision of how great he is.

AJ Styles said that Bryan wants a “hand out.” Styles said he doesn’t believe in hand outs. He believe in work and opportunities. He wondered how Drew Gulak got to WWE. Then Styles said if they can’t agree what their visions are, he proposed that he do something unexpected. He suggested that he give Drew Gulak an opportunity, a hand out “AKA an ass whipping.”