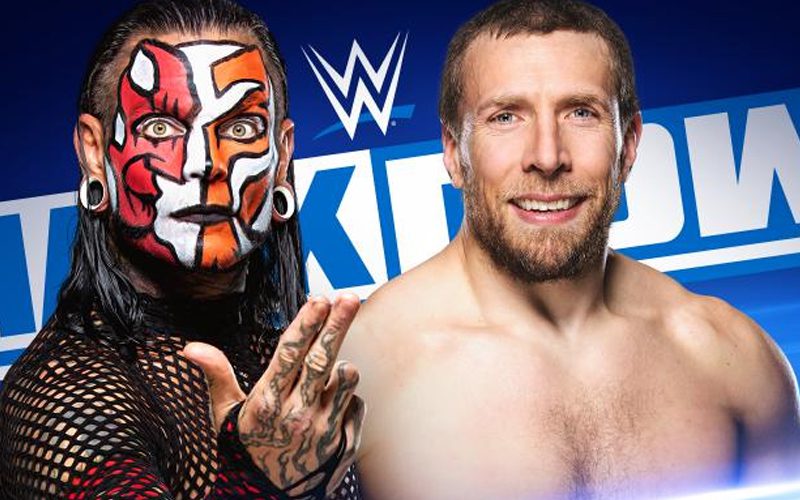 WWE has plenty in store as we head toward Backlash. Two matches are going down to determine the finals of the IC Championship Tournament. We might also see the SmackDown debut of The Original Bro.

A Moment Of Bliss segment is set for this week. The New Day will be Alexa Bliss and Nikki Cross’ guests.

Lacey Evans and Sonya Deville will do battle in singles action as well. We’ll have to see if Mandy Rose gets involved somehow.

Jeff Hardy vs Daniel Bryan and AJ Styles vs Elias is also slated for tonight’s show. The winners of those matches will face each other to determine the new IC Champion.

The show started with Elias on the street outside. There was a car accident and police were on the scene. Renee Young said someone wearing all black was seen running away.

The police started asking if Jeff Hardy was around if they could find him. The rental car apparently belonged to Jeff Hardy. Then they went over to Kayla Braxton who was talking to Braun Strowman who saw the whole thing.

Braun said he saw the whole thing go down. Then police started running and they eventually found Jeff Hardy. He was hurt and walking gingerly as they helped him along.

The police said he smelled like alcohol and then they cuffed Hardy and led him off.

There was a backstage meeting and Adam Pearce addressed the locker room. He said that Elias is not medically cleared tonight. Jeff Hardy was arrested. Neither can compete tonight.

There was a lot of discussion in the locker room. AJ Styles wanted to be in the finals with Bryan.

They all wanted the free shot in the tournament. Sheamus said it should be himself vs Corbin vs Bryan with the winner getting the match. There was a lot of disagreement. Jey Uso wanted a piece of the action since Jimmy’s hurt. Finally, it was decided that they will hold a battle royal match.

This was the match that was previously reported on. Drew Gulak was quietly inserted back into the situation here like he never left.

This was madness as 10 men all fought for a chance to become IC Champion. There was a lot of pushing and pulling as Superstars kept from being eliminated. Corbin was a target for the Lucha House Part. Then Corbin eliminated Dorado.

Gulak was eliminated by King Corbin as well. Nakamura missed a knee to the corner as Shorty G moved. They continued fighting. Gran Metalik hit a double springboard elbow on Sheamus and Corbin to save himself. Then Corbin kicked him and threw him out.

Then Corbin was eliminated by Jey Uso to get a big pop from the NXT Superstar fans as they cut to commercial.

Half of the field was left with Jey Uso, Shorty G, Sheamus, Cesaro, and Shinsuke Nakamura. G got an armbar on Sheamus and then he hit a tornado DDT. Jey hit Superkicks on The Bar and G hit a rolling Liger kick on Cesaro.

Jey and Nakamura went toe-to-toe and then Cesaro saved Nakamura from elimination as he targeted Nakamura. Cesaro tried to throw Shorty out, but he held on. Then G dragged Cesaro over the top rope and eliminated him.

Nakamura eliminated himself accidentally and then Cesaro jumped back in and tossed Shorty G over the rope. This left Jey Uso and Sheamus.

Sheamus dragged Jey to the apron and then he went for a kick. Sheamus grabbed his foot, backed him into the post, landed a Brogue Kick and won.

Sonya Deville cut a promo on Lacey Evans backstage, but she didn’t see Evans. Lacey Shoved her, called her a nasty, and walked off.

After the commercial, Shorty G and Cesaro were arguing. He didn’t like how Cesaro eliminated him. Cesaro said he was doing G a favor. He told G to be the bigger man “for once in his life.”

Deville used cheap shots and a smack mouth offense. Then Evans had a chance to talk some smack about Mandy Rose, but that just made Sonya angry.

Evans kicked Deville and hit a faceplant followed by a gator roll. She smothered Deville with the ring apron and continued to pummel on her.

Then the match ended via double count out