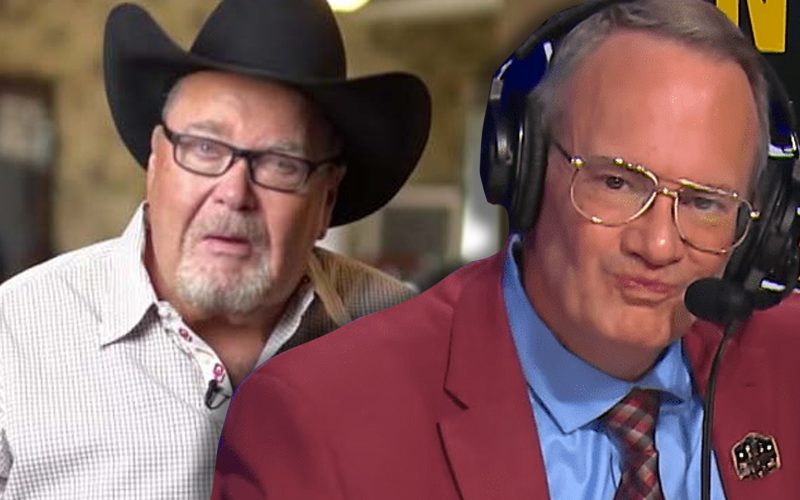 Jim Ross’ voice provides the backdrop for AEW action. He commentated the Double Or Nothing Stadium Stampede match, but Jim Cornette wishes that Good ‘ole JR would have sat that one out.

On a recent episode of Jim Cornette’s Drive-Thru, he dove into Double Or Nothing, and he didn’t hold anything back. Cornette was not a fan of the Stadium Stampede match at all. In fact, he considers it something that could ruin Jim Ross’ legacy in the professional wrestling business.

Cornette then suggested that Jim Ross put his foot fown and go home instead of calling a match like the Stadium Stampede.

“Let’s face it, you know Jim Ross knows, I haven’t talked to him after this, probably won’t talk to him for awhile after this, but he knows this is garbage. There’s two ways to look at this. He signed to do a job so he’s going to do the f*cking job and he’s not going to fucking come out and bury the shit on the air. That’s being professional. Or there is being professional enough to go, ‘You know what, I’m not going to ruin my goddamn legacy and my standing as the greatest announcer of the modern era by being remembered for calling this f*cking horse drivel.’ And he should go home and f*cking apply his many talents to doing his own thing instead of f*cking letting these people drag him into the goddamn cesspool.”

Jim Cornette didn’t enjoy the Stadium Stampeded match, but a lot of other fans appreciated it. AEW did everything they could to bring a night full of action for fans who watched Double Or Nothing. The final match of the night might have been a bit unorthodox, but we’re also living in very unconventional times.