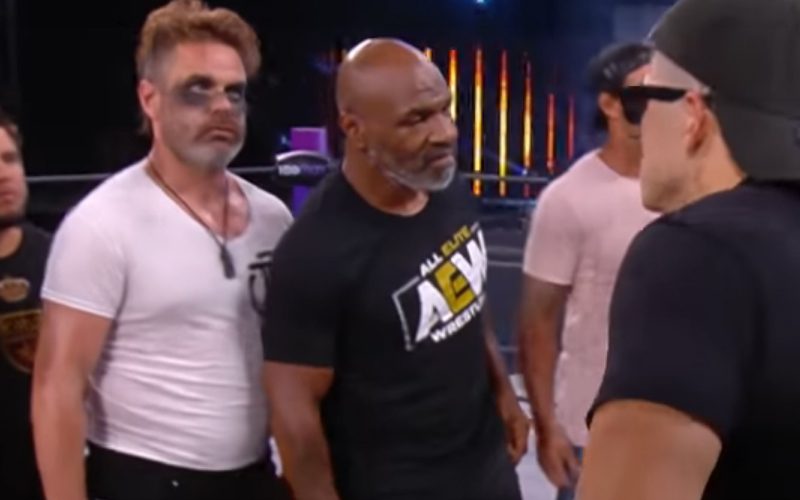 Mike Tyson does what he wants and that was evident with his appearance during AEW Dynamite this week.

During Wrestling Observer Live, Bryan Alvarez revealed that nobody knew that Mike Tyson would come out with such a large entourage. That especially goes for the man in his crew named Gooch who drew so much attention with his face paint.

“I was told by people there that nobody knew Tyson was going to come out with that many guys and he came with his whole posse including this fella named Gooch. He had no idea where he was at or what he was doing. He had face paint on, I don’t even know why which just consisted of black rings around his eyes so as far as I know if might not have been face paint. He’s out there and the whole idea is trying to get over the idea of Mike Tyson and Chris Jericho jaw jacking and then having a pull apart.”

“This Gooch dude is totally trying to steal the show. Unfortunately I can’t take my eyes off the guy and between him and Mike Tyson being so wacky — I mean it was like, it was a circus, but the positive I have to say is I couldn’t take my eyes off it for one second.”

Mike Tyson’s AEW Dynamite appearance brought mainstream publicity. It’s possible that Mike Tyson will show up during today’s Dynamite tapings for next week’s show. It was certainly something that we didn’t see coming.