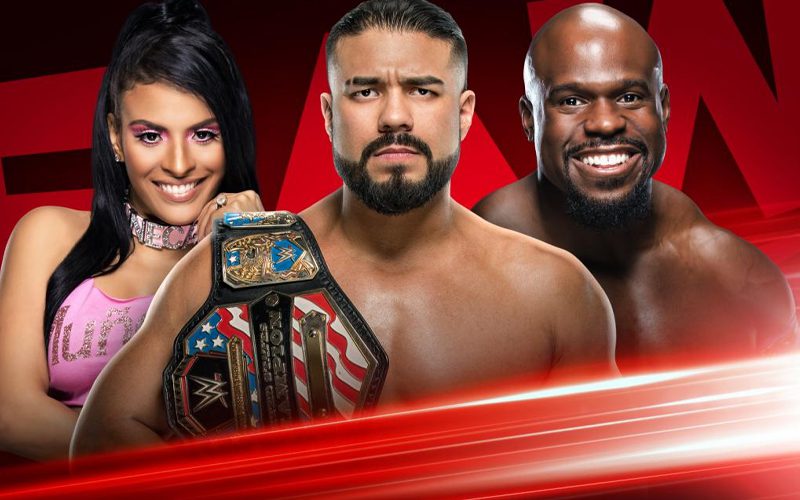 Tonight’s RAW will feature a big title match as Andrade defends his United States Championship against Apollo Crews. Last week saw the solidarity of Vega’s trio crumble, and now she’s down to two, but she may even lose their gold tonight.

Elsewhere tonight, there will be a triple threat match between Nia Jax, Natalya, and Charlotte Flair to determine the number one contender to Asuka. Why Flair is in this match instead of Ruby Riott or Liv Morgan is beyond me. And finally MVP will bring back the V.I.P Lounge, with Drew McIntyre as his guest. Perhaps most excitingly, it seems WWE will be recruiting Performance Centre talent tonight to act as crowd members, which should add some much-needed life to the shows.

And that’s the preview for tonight’s RAW. The show begins at 8 PM EST and we’ll have full results here. Enjoy the show!

RAW opens with an incredible tribute to soldiers for Memorial Day.

We go live to the arena and there are a few dozen NXT performers behind the barricades with plexi-glass on the guard rail also, for some reason though they’re all standing with no seats, but they are all six feet apart and have been tested.

Kevin Owens is in the ring and welcomes us to the Kevin Owens Show. Owens makes mention of the NXT performers and says tonight he will face Angel Garza but first he has to address the triple threat to determine the number one contender to Asuka. And who better to discuss it than the Empress, the RAW Women’s Champion herself?

Asuka comes to the ring and chants for Becky. Owens congratulates Asuka for earning the title and asks her to speak on last week when Nia Jax interrupted her and Kairi. We see the clip, then Asuka rambles in Japanese before being interrupted by NXT Champion, Charlotte Flair.

Flair says that RAW Women’s Championship should have been handed to her instead. Charlotte reminds Asuka that she has never beaten her, but then out comes Natalya. Nattie assures Kevin Owen she won’t wreck his set this week like she did last week, and apologises to him. She says she’s been frustrated, and Flair tells her sucking up won’t help her.

This time it’s Nia Jax who comes out and she says we all know she’s going to be the next RAW Women’s Champion. Owens leaves the ring before Nia gets in. Jax says she’s going to bulldoze Asuka at Backlash. Owens tells Asuka not to hit Nia in the face, so Asuka then hits her with a backfist to the face. Natalya and Flair brawl out of the ring and Asuka yells at Jax in Japanese.

Kayla Braxton interviews Apollo Crews backstage and asks if he is ready to face Andrade. He says tonight is the greatest night of his career because he’s going to beat Andrade and become the new United States Champion.

The title match gets underway and Andrade takes his time before engaging. Apollo forces Andrade to the corner and beats on him. Apollo slams Andrade for a one-count, but the Champion then connects with a discus elbow for a near-fall.

Andrade grabs Crews for the hammerlock DDT but Apollo breaks free and lifts him up. Vega gets on the apron and Apollo gets distracted. Andrade almost knocks Vega off the apron, but then Crews hits an enziguiri and he does knock her off. Andrade goes out to check on vega.

Back live and Andrade attacks Apollo as he tries to exit the ring. Andrade slams Apollo into the steps and grabs hit US Championship to taunt Apollo. Zelina refuses to leave ringside after being advised by medical staff.

Back in the ring and Apollo fires back with right hands, followed by a running splash in the corner. Crews takes Apollo up top but gets knocked into the tree of woe and hit with a double foot stomp. Mid-match, Kayla interviews Angel Garza backstage and he talks about sex as Andrade misses double knees in the corner.

Crews looks for the spin-out powerbomb but Andrade counters with a hurricanrana into the buckles. Andrade hits running knees in the corner for a near-fall. Apollo hits an enziguiri, followed by a military press, standing moonsault, standing shooting star press, and wins!

Charly Caruso interviews Apollo in the ring. He says when he first stated his journey he was told he couldn’t do it, they laughed at him. But 11 years of hard work and sacrifice and he’s won his first title in WWE. He never quit or gave up. And now he can say to the whole world that he is the United States Champion. We see that Andrade is flipping out backstage and destroying stuff.

The Monday Night Messiash is backstage and he says tonight is a night for celebration. Seth says Rey Mysterio was a sacrifice for the greater good and he can’t imagine the pain he went through. He doesn’t know what the future holds for Rey but if that was his final act as a WWE Superstar, then at least it was a courageous one. He holds his hands out and he’s joined by his disciples, Austin Theory and Murphy. Both disciples thank Seth for saving them. Seth says tonight they will show Humberto Carrillo and Aleister Black what it means to cross the Monday Night Messiah.

Charly Caruso interviews Charlotte backstage. Charly asks what it will mean for Charlotte’s legacy if she becomes a double Champion. Flair says she is the most consistent and prolific Champion in WWE history. She is the measuring stick and frankly, nobody compares. Asuka comes dancing into the frame with her title, and says “red is not your colour”.

The IIconics comes to the ring but we’ll have to wait until after the break to ind out why.

We’re back with The IIconics and Peyton starts to apologise for costing them the match last week. Kay cuts her off and says she’s the one who needs to apologise because she slapped her and it makes her sick. They’ve come too far to have any animosity. They remind everyone that they’ve been friends for life, signed their contracts together, won the titles together, and never got a chance to defend them.

Alexa Bliss and Nikki Cross come out and Bliss says they’ve had opportunites but they failed. Cross starts to talk but Royce cuts her off and tells her to stay quiet. Cross says that she has taken all the same steps as Bliss, all the same moves to get to where they are. She left Glasgow with nothing in her pocket and no friends, and she made it. She was an outcast when Alexa found her and offered her a hand, and she likes to think she proved to Lexi what friendship is. And there’s noting more iconic than that.

Royce and Kay attack the Women’s Tag Team Champions, beating them each into the corners. They beat Alexa out of the ring and hit Cross with a spinning axe kick. They hit an inverted Magic Killer before holding the titles up and posing.

Lana approaches MVP backstage and stares at him. She says they need to talk and he laughs and says “no, we don’t.”