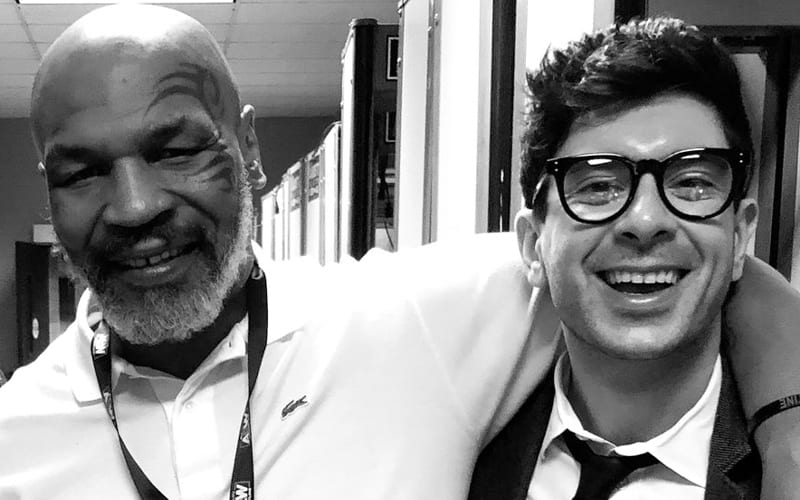 Mike Tyson will be at AEW Double Or Nothing to present the TNT Championship to either Lance Archer or Cody Rhodes. Bringing in Mike Tyson was a huge power play for AEW during a pandemic. Tony Khan is really having fun with this big get for All Elite Wrestling.

Tony Khan posted a photo of himself and father Shad Khan with Iron Mike from last year’s Double Or Nothing. Tyson loves pro wrestling and he’ll be back for Double Or Nothing this year as part of the show.

Double or Nothing, our 1st #AEW show, Mike Tyson came as a fan, he loves wrestling, we met & became friends. Now he’s back 1 year later to present the #TNTChampionship belt for the 1st time to the 1st champion! Congratulations & good luck finalists

Khan also showed off a photo of Tyson at a Jacksonville Jaguars game. He said that Mike Tyson has “the winning touch,” and he hopes to see Tyson at many more Jaguar games in the future.

Iron @MikeTyson in #DUUUVAL watching the @Jaguars win on Thursday Night Football! I’m excited that Mike is coming back to Jacksonville next Saturday for #AEW Double or Nothing! And I think we might see Mike at some more Jags games in the future too, he has the winning touch!

Double Or Nothing will be a loaded show on May 23rd. The announcement of Iron Mike Tyson is certainly going to go a long way to gaining them some real attention.

It’s uncertain how much AEW is paying for Mike Tyson, but he doesn’t come cheap.