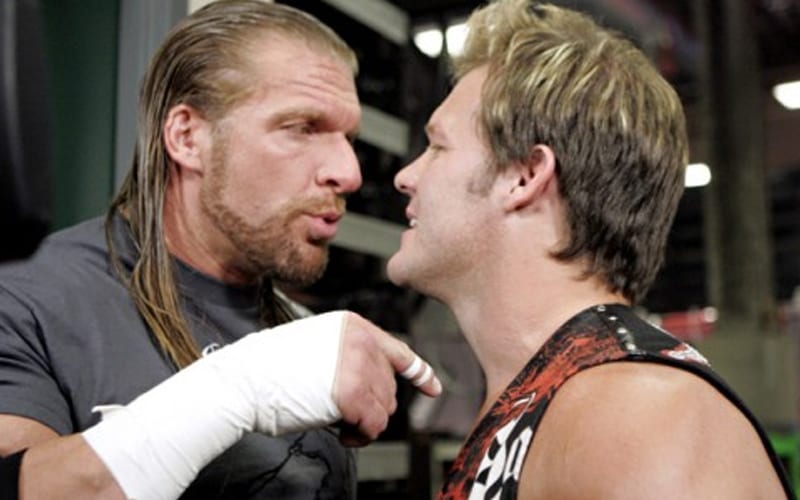 Chris Jericho and Triple H have been to war in the ring. Their rivalry was apparently taking place backstage as well.

While speaking to Rich Eisen, Chris Jericho discussed his past issues with Triple H. He stated that they never really liked each other back in the day. Years later they are friendly, but it just goes to show how much someone can grow personally as they mature in the business as well.

“I think there were guys, in the past, that I had issues with. I mean Triple H is one of them. He’ll tell you the same. In the early 2000’s, we didn’t have much [likeness] for each other, but we always had great matches, and I think that’s one of the reasons why. We just had this professional rivalry, maybe a bit of a personal dislike [for each other]. But fast forward five, six, seven years, you get to be older and wiser and think back. Why did we have so many problems? Why did we hate each other? Why didn’t we like each other? And now we’re friends.”

“I think there’s a lot of professional rivalry when you’re young full of vim and vigor as they say. It happens in rock and roll bands all the time. Bands will break up, and 10 years later, they’ll get back together like why did we waste 10 years of our lives not playing together?”

In the end, Vince McMahon used that real-life heat between The Game and Y2J to fuel their matches.

Chris Jericho and Triple H are separated by company lines once again. It’s unlikely they will have another match, but Le Champion can remember the wars he had with Triple H. Fans can also look back and see that extra bit of animosity powered by a hunger to rise up the rankings and claim their spot in WWE history.