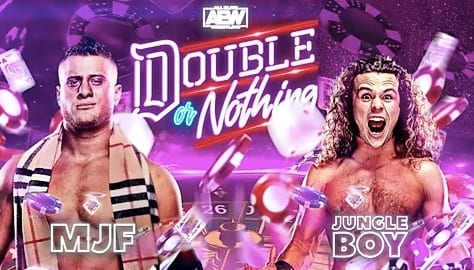 According to a recent report from Sky Bet, the betting odds for MJF vs Jungle Boy at AEW Double or Nothing have been released.

While it may not be the same kind of spectacle as last year, Double or Nothing certainly appears to be one of the most stacked cards of the year so far in pro wrestling.

One of the most intriguing matches on that card so far will see MJF go up against the ultimate underdog Jungle Boy.

In terms of the odds, MJF is currently the overwhelming favorite to come away with the victory with odds of 1/5. On the flip side, Jungle Boy is priced as a 10/3 outsider to cause the upset.

It’s starting to feel as if MJF is going to be one of the next men in line to challenge for the AEW World Championship, but in order to get to that point, he first needs to dispatch of Jungle Boy.