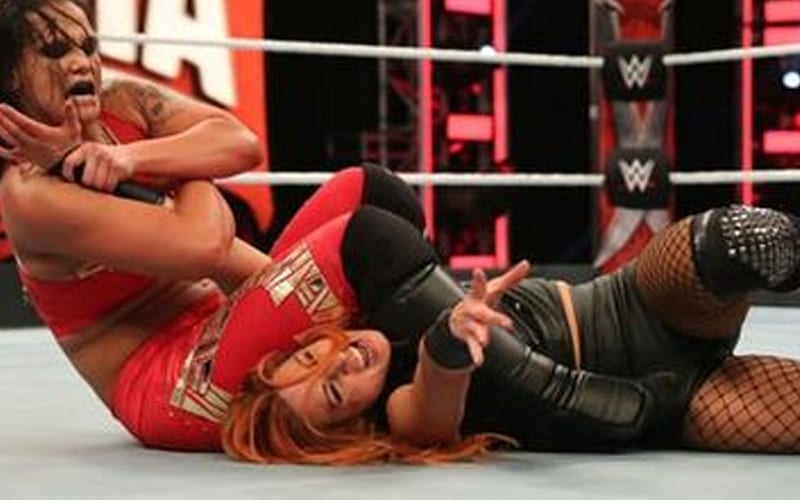 Becky Lynch revealed on Raw this week that she is pregnant. This was an announcement of both joy and sadness. The Man has to go away for a while, but she is going to start a new journey through motherhood.

Becky Lynch revealed when she discovered that she was pregnant. Fans weren’t 100% certain if that meant she wrestled while with child. She revealed that her baby is coming in December which puts her pregnancy as starting in March. Lynch told People that she didn’t discover she was pregnant until last month. She didn’t knowingly wrestle while pregnant.

During PW Insider Elite audio, Mike Johnson said that Becky Lynch did work WrestleMania 36 while pregnant if you go by those dates. This should explain why her match against Shayna Baszler didn’t have the physicality that a lot of fans were expecting.

“When she wrestled Shayna Baszler at WrestleMania at the WWE Performance Center she became the first-ever WWE performer that I know of to work a WrestleMania while pregnant.”

“It makes her a hell of a warrior, but it also might explain why that match was not the physical war that we all expected and a physical brutal monster of a match. Obviously, the finish there was a little safe and a little weird and that match did not live up to what a lot of people think it should have been, but in hindsight, that makes a lot more sense and kudos to everybody involved.”

Becky Lynch could return by next year’s WrestleMania, but it will take a lot of fast work and getting prepared for a comeback. We will have to see what’s next for The Man, but the next time we see her she might be a mom.