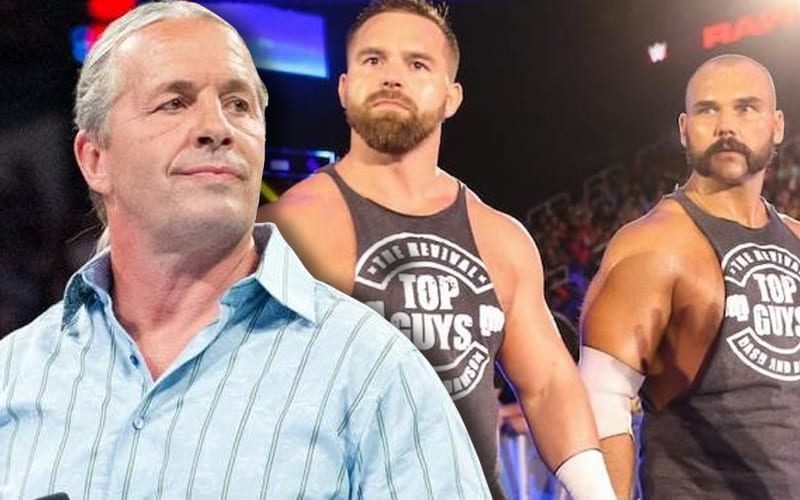 The Revival are no longer with WWE. They are now known as Dax Harwood and Cash Wheeler and ready to make a name for themselves on their own. Bret Hart couldn’t be more proud of them.

While speaking with Talk Is Jericho, the former Scott Dawson revealed that The Hitman texted him on the day WWE released them. Bret Hart wanted to let the Top Guys know how proud he was that they were standing up for themselves.

Bret Hart didn’t seem to have Cash Wheeler’s name in his phone contacts so he asked him to pass the message along to the former Dash Wilder to make sure he heard this encouraging message.

“The day that we were granted our release, that day, I got a text message from Bret Hart. He told me how proud he was of us. He asked me to send it to Daniel (Cash Wheeler, formerly Dash Wilder), which I did. He told me how proud he was that we stood up for ourselves, and stood up for what we believed in because it would have been so easy to sit back and collect the money.”

When he sent the text, I knew beyond a shadow of any kind of doubt, that we had done the right thing because the guy who is the king of standing up for himself, he punched Vince in the face, the guy who is the epitome of standing up for something that he believes in took five minutes out of his day to text me to tell me how proud he was of us for doing that, ‘I was like hell yeah, we’re on the right path now.’”

It will be interesting to see where Dax and Cash go next. The world was shut down upon their release from WWE, but it will slowly re-open and that opens up a world of opportunities for them. Odds are Bret Hart will pay very close attention to their activities as well.