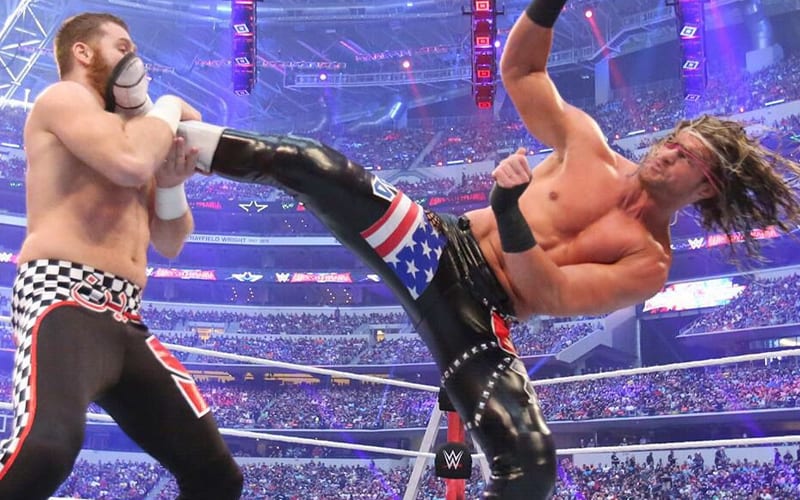 The Superkick is used by several pro wrestlers nowadays. It was once a finisher, but now it’s a really cool move to use during a match. WWE apparently didn’t want Dolph Ziggler using it.

While speaking about this situation on the ARN Podcast, Arn Anderson revealed that WWE considered taking the Superkick away from the Show Off. This was during a time when Ziggler was very vocal in WWE which wasn’t received very well by Vince McMahon and others.

“Dolph’s got a set, and he doesn’t mind saying what he thinks, and even though he’s right most of the time, that’s the wrong thing to do once you walk up in Gorilla. Well, the reality is that the company wants blind devotion. Dolph had an opinion for the longest time ten years ago. It was the fact that Dolph who throws a hell of a Superkick — the office did not want him using the Superkick because that was Shawn’s finish but Shawn was retired, Shawn was gone. You can’t retire moves.”

“How many Superkicks do you see today for God’s sake? Probably one in every single match, in every company. So, that was a heated issue years ago, but Dolph, he had an opinion and he would voice it. The guy was never a question amongst all the producers. He worked his ass off and once we got to Gorilla, no matter if he agreed to what’s going on or not, he would go out and give you 100 percent. So I’m a big fan of Dolph Ziggler’s and I think he’s one of those guys you may bitch about him when he’s on the card and I’m sure a lot of guys, the higher-ups in the office and certainly the boss got tired of dealing with Dolph but the fact of the matter is Dolph was right a lot of the time, and he’s been one of those performers that has just over the years made everybody better than what they were, and the question is to why wasn’t he one of the top, top guys?”

“I certainly don’t have it. It wouldn’t have bothered me at all. The reality is one day, and you mark my words; Dolph is a wealthy man. I know that he’s made a lot of money for a long time, even not being in a top spot but I got a feeling Dolph’s frugal, I got a feeling he’s made some investments and he’s smart and one day he’ll go, ‘Oh, you wanna give me some more sh*t about something else? You know what? See ya,’ and he’ll thump down the steps and take off his boots and walk out the door and you’ll never hear from him again, and he will have accomplished what he wanted to in the business. Left on his own terms.”

WWE didn’t take Dolph Ziggler’s Superkick away from him, but it was apparently a close situation for a time.

Do you think that the Superkick is used too much? Sound off in our new and improved comments section!