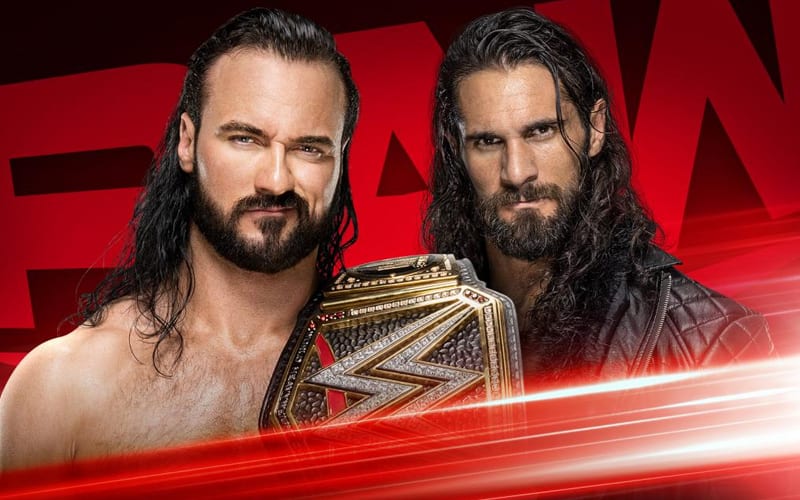 Tonight’s show will feature three qualifying matches for the Money In The Bank ladder match. Those include Apollo Crews Vs. MVP, Aleister Black Vs. Austin Theory, and Rey Mysterio Vs. Murphy. Hopefully these matches get lots of time to breathe like Black Vs. Crews from two weeks ago.

The only other thing we know about tonight’s RAW is that Drew McIntyre will respond to being attacked by Seth Rollins last week. This new feud will likely result in a match for the WWE Championship at Money In The Bank, and it all kicks off tonight.

This week’s RAW opens with a look back at last week when Seth Rollins attacked Drew McIntyre following his win over Andrade. The WWE Champion makes his way to the ring; he’ll face Angel Garza later tonight.

McIntyre says this is the highlight of week and thanks us for joining him. He gets to business and says he was ambushed last week, and left lying. And who isn’t surprised that happened? Him. The WWE Championship brings with it fame, prestige, money, and more, but also, a bullseye. Because whoever holds that title is the best in the industry and he is at the top, where it’s crowded. Everybody wants to be Champion.

McIntyre says Seth Stomped him twice last week and if you read between the lines he isn’t all that complex; he wants to be the Champion. But does Seth deserve an opportunity? Drew says he could make Seth jump through hoops but he’s one of the most decorated WWE Superstars of all-time. And if he wants to be one of the best of all-time he’s going to have to fight the best WWE has to offer. So at Money In The Bank he’s challenging Seth. And then he addresses Rollins directly, but before he can get very far he’s interrupted by Angel Garza, Austin Theory, and Zelina Vega.

Drew calls Vega the number one thorn in his ass. She laughs and says they’re all so sick of his little speeches. The problem is, he’s too focused on Money In The Bank that he’s overlooking Angel Garza. Just then, Andrade attacks the Champion from behind but quickly gets dropped with a Claymore Kick. Theory and Garza refuse to get into the ring and McIntyre hits Andrade with another Claymore that sends him flying over the ropes. The heels retreat.

Money In The Bank Qualifying Match

Theory takes a wrist at the offset but Black spinds out and takes Theory down by the leg. Black wraps Austin’s arm around his back but Theory gets up and takes the wrist again. Black hits an arm drag, but gets dropped with a shoulder. Black looks to sweep Theory but it’s dodged.

Austin tries to throw Black out but he redounds and tosses Theory to the apron. Black swings for a Black Mass but Theory avoids it. Austin tries to get back inside but Black knocks him off the apron. Zelina Vega then jumps off commentary and talks trash to Black, allowing Theory to attack him from behind and throw him into the barricade.

Back live and Black is knocked head-first into the turnbuckles. Theory rolls through the ropes for a dropkick and a two-count. Austin lifts Black into a torture rack and throws him into the buckles, then again. He attempts it a third time but Black counters and hits a body slam. Black with a roll-up for a near-fall.

Theory attempts the ATL – his finish, but Black lands on his feet and applies an armbar. Theory lifts Black and hits a one-handed powerbomb to break the hold. Theory’s arm is hurting but he shoves Black into the buckles chest-first. Black rallies and lands a series of strikes, followed by a running knee to the face. Black connects with a springboard moonsault for a near-fall.

Theory counters Aleister and lands a superkick before hitting a brainbuster for a near-fall. Theory talks some trash, but gets punched and Black hits a switch knee to the face. Bridging German suplex earns Black a near-fall. Aleister lifts Theory for Black Mass but Theory ducks it and hits him, then runs forward and gets dropped with Black Mass.

Aleister is the second man qualified for Money In The Bank, alongside Daniel Bryan. Byron saxton joins Aleister in the ring for an interview. He asks what Black’s plan is for this year’s unique Money In The Bank match that takes place at WWE HQ in Connecticut. Aleister says he doesn’t know much about corporate life, and they’ll probably want him to cover his tattoos, but he’s going to make sure every floor of that building will be a personal hell for his opponents.

Charly Caruso interviews Shayna Baszler and asks her if she went too far last week when she stomped on Sarah Logan’s arm. Baszler laughs and says no, all she did was break Logan’s arm.

Baszler drills Indi with a forearm and some kicks right away. Gutwrench suplex from Baszler, then she attempts the elbow stomp but Hartwell avoids it and rolls her up for a one count. Baszler gets mad and runs at her but Hartwell kicks her. Shayna attacks her in the corner and slams her, followed by a knee to the jaw and a stomp to the elbow.

Vink starts the match by throwing Ricochet, then tagging Thorne. Shane slams Ricochet and runs at Cedric but Ricochet comes back with a rolling dropkick. Alexander tags in and they double-team an incoming Vink. Alexander tags Ricochet again and he knocks Shane around, then goes to the apron but Vink yanks him down.

Vink tags in and drops Ricochet with a right hand. Vink gets Ricochet up and attempts a powerbomb but Ricochet reverses with a hurricanrana into the buckles. Thorne and Alexander get tags, and Cedric takes them both out. Alexander puts Thorne’s legs on Vink’s shoulders and hits a swining neckbreaker. Tag to Ricochet and a tornado DDT to Thorne.

Ricochet hits a standing shooting star press, followed by a tilt-a-whirl DDT to Vink. Cedric gets the tag and they hit the Recoil into the Lumbar Check for the win.

Charly Caruso interviews Kairi Sane and Asuka. Caruso says tonight Sane will face Nia Jax again but why will the outcome be any different. Asuka yells and says tonight Kairi is ready for rematch. They dance off screen.

We see Bobby Lashley in the gym, he brings Lana into the frame and she rubs his arm. He says he’s going to demonstrae how simple it is to flip a tractor tire once he’s warmed up. Lana says everyone is already jealous of her, but wait until we see what he can do. They walk off together.