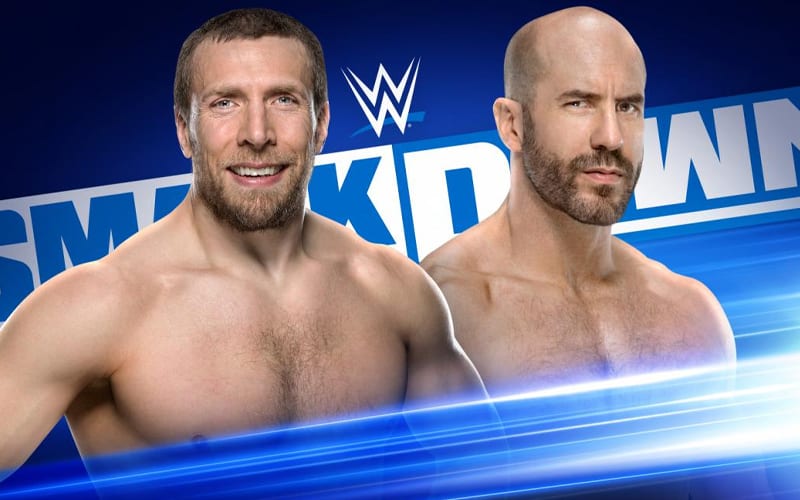 SmackDown will be live this week. The company changed their taping schedule meaning next week will be pre-taped.

Sasha Banks will face Tamina Snuka. If Tamina wins then she gets a shot at Bayley’s SmackDown Women’s Title.

Mandy Rose is set to confront Sonya Deville. She is looking for an explanation after Deville tried to sandbag Rose and Otis on the road to WrestleMania.

Finally, the SmackDown Tag Team Titles will be defended in a triple threat match. The Miz vs Big E vs Jey Uso will happen with the tag team titles on the line.

They started the show off with a Howard Finkel graphic.

Nikki Cross and Alexa Bliss came out and they were very happy to be champions. A Moment Of Bliss segment started off the show.

They brought out Braun Strowman as their guest. They shared compliments and then toasted with coffee cups. Nikki said next week they have a tag team title match.

Bliss brought up his MITB match against Bray Wyatt. Then they showed a clip from last week. Strowman said nobody know Wyatt like him. He used to be a part of his family, but he wants to forget about that. He’s achieved everything on his own and Bray didn’t create him. He said Wyatt is a manipulator who makes people doubt their reality as a whole. If he wants to challenging him for the title. Then he said the only thing he’s gonna get is these hands.

Braun noticed a gift and said that Bliss didn’t have to get him a gift. They sat there while he opened it and Bliss said she didn’t get it for him. Then Braun opened up a black sheep mask just like he used to wear as a part of the Wyatt Family.

If Banks loses then Snuka gets a SmackDown Women’s Title match.

Banks tried to give Tamina a small Legit Boss t-shirt. “This is a small! I wear an extra large!” Tamina said before starting the match.

Tamina gained control early on and launched Banks to the outside of the ring. Tamina continued punishing Sasha Banks and then Banks landed some knees and hammered away at Tamina.

Banks hit a basement dropkick and Tamina kicked out of a pinfall attempt. Banks continued to taunt and beat on Snuka and then she latched on a headlock.

Then Banks tried a slingshot move and Tamina slammed her down. They went outside and Bayley tried to distract her. Banks pushed Tamina against the ringpost and then Bayley was about to get involved and Lacey Evans ran down and hit a flying forearm off the ring steps to Bayley.

Then Tamina landed a super kick on the inside and won the match.

Lacey Evans was shown backstage and Charly Caruso grabbed a word with her. Evans said Banks got a taste of her own medicine tonight. She said where ever Sasha goes, she goes. She’s not only a U.S Marine, but she’s not going to stop until the mission is complete.

This was a huge squash match. Sheamus just stomped on Denzel and then he hit a Brogue Kick for the win.

After the match, Sheamus cut Michael Cole off as he was talking about how they ran a Jeff Hardy video last week. Sheamus asked “What about the Celtic Warrior?” He wasn’t happy and not a fan of Jeff Hardy at all. He won’t be disrespected, fella. Then he left.

This is a MITB qualifying match.

They started out fast and Dana Brooke threw Naomi out of the ring and tried to win via count out. Brooke hit a baseball slide on Naomi and then they moved back to the ring where Naomi kicked out at two.

Naomi turned it around and tried to get some quick pinfalls. Then The Glow landed a kick and a springboard knee strike for a two-count. Brooke coutered a rana into a powerbomb for a two count.

Naomi got her knees up to block a splash. Naomi hit a rear view for a two count. Naomi missed a split legged moonsault and then Dana Brooke got a roll-up pin for the win.

Sonya came out and asked for the microphone. She asked for Mandy to come out after saying that she’s been trying to get ahold of her for weeks now. So, she’s out there to give a public explanation.

Mandy didn’t come out. Sonya was crying real tears. She said she’s never had anyone like Mandy. “So some out here and let me tell you what I’ve been trying to tell you all along.” Then Mandy came out.

Mandy said she doesn’t have anything to say to her after what Deville did to Otis and her. Deville said she’s spent more time with Rose over the last 5 years than she’s spent with her own family.

Then Sonya started to say “you’re the most…” then her mood changed totally and she said she’s the most selfish human being she’s ever met. Sonya realized when Mandy got with Otis that Fire & Desire was all about Mandy and not Sonya.

Deville went on a rant about sharing camera time with the Golden Goddess. If they would have gone along with the plans for Fire & Desire then things would be better. She helped Dolph get with Mandy so Ziggler would help them stay together as a team.

Then Sonya said she feels so much better because all she wants is to see Mandy Rose hurt. “You might be pretty Mandy, but you’re nothing but a dime a dozen bottled blonde who looks like you were made in some kind of lab.” She said Mandy has no talent as Rose tried to look hurt.

Sonya continued to rail on Mandy Rose as she promised that she will do everything in her ruin her. Just as they were gonna fight, Ziggler came out.

Dolph said they went about things the wrong way. He was wearing a Zack Ryder t-shirt. Sonya hit Mandy with a cheap shot and then Otis ran out. Sonya jumped on Otis’ back and then Mandy peeled her off causing them all to scamper away.

Ziggler jumped back in and Otis took him out before Otis nailed a caterpillar. Then Ziggler left again.

They aired a Miz promo where he talked about how unfair the match is tonight.

They started out hot with Daniel sending Cesaro to the flood. Then Daniel Bryan hit a suicide dive.

The glitch took over and a hooded figure said that we’ll see the truth. They showed a lot of clips. Then he said “some keep their friends close, others keep their enemies closer.” Cut to commercial. What?!

Cesaro and Bryan lit each other up with kicks and then Bryan stomped down on Cesaro’s arm. Bryan started working on Cesaro’s arm. Cesaro caused separation for a moment, but then he ended up in another arm submission. Cesaro lifted Bryan up with one arm and threw him to the mat.

Bryan ate a kick to the back and a bodyslam. Bryan worked on Cesaro’s arm some more and climbed up only to be caught by Cesaro and thrown into a backbreaker for a two count. Then Cesaro locked in a sharpshooter until Bryan got to the bottom rope.

They moved outside and Cesaro nailed Bryan with a running uppercut. They cut to commercial and when we returned they were still beating the crap out of each other.

Bryan took Cesaro down into an armbar once again. Then Cesaro tried to hoist Bryan up again, but Bryan blocked it and he kicked Cesaro’s arm before hitting Yes Kicks.

They continued and Bryan tried for a Yes Lock, but Cesaro got loose and drilled Bryan with a clothesline. Bryan jumped off the top, Cesaro caught him and then Bryan got him into a Yes Lock. Nakamura tried to get in, but Gulak stopped him. Then Cesaro tapped out!

Elias was headed for a concert, but then Corbin jumped him. The Lone Wolf beat The Drifter around the backstage area of the WWE PC. Then he drug him off screen. Cut to commercial.

They showed Elias backstage holding his wrist. Then Baron continued the beatdown. All of this was over a comedy song. Corbin asked Elias how his hand felt and then Corbin hit him with his scepter again.

Corbin said he’s the king and not a joke. He’s making an example out of Elias. He will bow down to the king. Elias really sold the beatdown with some major wheezing and groaning. As he started to get up. Elias got whacked over the back with his own guitar. Then Corbin left.

They moved outside quickly as Big E beat The Miz down. Big E cleaned off the announce table and then he ate Superkicks from Miz and Jey. Then they crushed the announce table with Big E’s massive body thanks to a double team suplex.

When they got back from commercial, Jey hit suicide dives on each person. Then he hit Miz with a crossbody off the top. Jey hit hip attacks on both Big E and Miz in the corners. Miz hit a spingboard axhandle to Big E and E blocked a Skull Crushing Finale.

Jey almost got a pinfall on E after nailing both E and Miz with superkicks. Miz almost stole one with a roll-up on Jey. Then Miz rolled through and tried for a Figure 4, but Jey got out.

Then Miz hit the Skull Crushing Finale, then Jey kicked out. Big E hit a Big Ending and got the win.

After the match, they showed Kofi and Xavier Woods’ reactions from home.