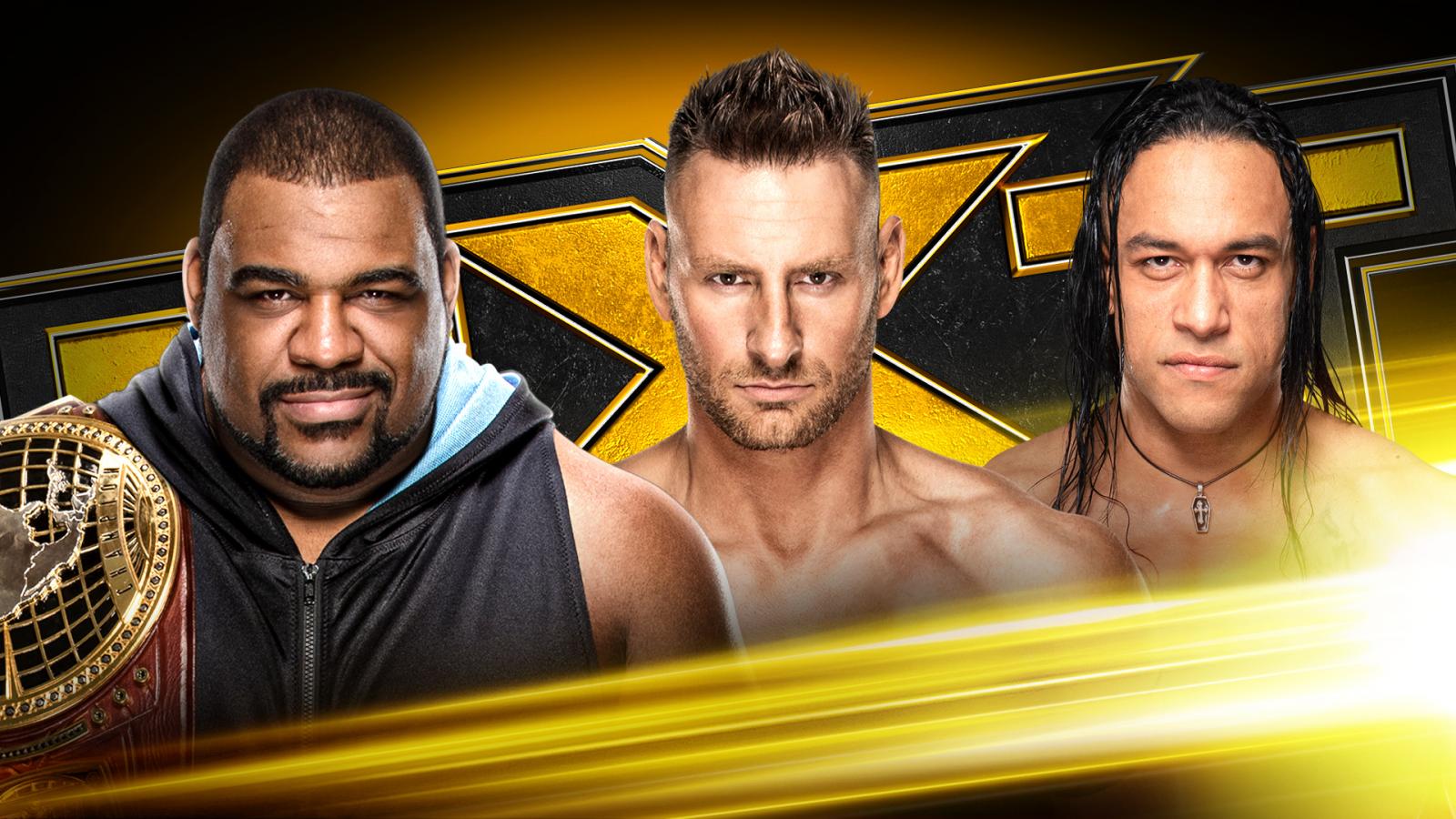 Welcome to Ringside News’ coverage of WWE NXT. Please keep refreshing throughout the show for constant updates once it kicks off at 8:00 PM EST.

As we learned on the last episode of NXT, this week we will begin to see the matches that were initially scheduled for NXT TakeOver: Tampa Bay. Three matches have officially been announced for tonight’s show, and here they are.

Before Velveteen Dream can get his hands on the NXT Champion Adam Cole, Dream will have to take on Cole’s fellow Era teammate and former tag team champion Bobby Fish. If Dream can defeat Fish tonight, will Cole give Dream his NXT Championship title shot that Dream wants?

Also on the card tonight, he Second Chance Gauntlet Match. With one spot remaining in the ladder match to determine the #1 contender to the NXT Women’s Championship, every woman who lost her qualifying match will have the opportunity to qualify here. The participants will be Xia Li, Shotzi Blackheart, Kayden Carter, Dakota Kai, Deonna Purrazzo, and Aliyah.

Finally, in the first match that was likely planned for TakeOver: Tampa Bay, NXT North American Champion Keith Lee will defend his championship in a triple threat match against both Damian Priest and Dominik Dijakovic. The feud between these three men has been brewing for the better part of two months, and we will finally see it’s conclusion tonight.

Does the black and gold brand have anything else up its sleeve for the first episode of April? We will find out when we begin live coverage of NXT at 8:00 PM EST!

In lieu of an opening segment this week, we head straight into a match.

When Bobby Fish comes to the ring, the rest of Undisputed Era are conspicuous by their absence, but it might be because of the virus. Dream plays mind games with Bobby Fish during the beginning of the match and seems to be able to stand toe-to-toe with Fish briefly.

Fish takes control with a stiff strike to Dream’s face, but Dream really back and takes Fish down with a clothesline. Dream drops his knee on Fish’s face and covers him for 1. Fish locks in a sleeper hold on Dream, dropping Dream to his knees, but Dream fights back. Fish sweeps Dream’s legs and drops him to the mat.

Dram tries to catch Fish by surprise, but Fish pushes him away with a boot, and Dream creates separation between himself and Fish, using the outside of the ring to get an advantage. Dram lands a double axe handle from the top rope, then hits Fish with boots from the corner, and a superkick.

Dream goes to the top, thinking about the Purple Rainmaker, but Fish escapes to the outside. Dream dives onto Fish on the outside anyway and Dream tosses Fish back into the ring. Fish escapes and Dream gives chase, but Fish catches Dream and tosses him into the barricade, sending us to our first commercial break.

Back from commercial and Bobby Fish is in firm control of Dream, taking Dream down with a dragon screw. Fish focuses on Dream’s left knee. Fish drives his knee into Dream’s face, then continues to do damage to Fish’s leg. Fish goes to the apron and hits a senton on Dream, covering him for a two count, then we go back to commercial.

After his match, Dream gets on the mic and calls out Adam Cole, saying that his “experience” is coming. He says that Cole is “about to get worked harder than he ever has.”

We get a recap of what happened last week when Malcolm Bivens released his new tag team on Matt Riddle.

Backstage, Malcolm Bivens is interviewed with his “associates,” Rinku and Saurav. Together, they are Bivens Enterprises. Bivens says that they are waiting for the BruiserWeights.

Lumis stares down Atlas at the beginning of the match. Atlas goes for an overhead strike, but Lumis sidesteps it and strikes away at Atlas. Atlas is able to take down Lumis with an armdrag and an enziguri, but Lumis comes back with a spinebuster.

Lumis wrenches away at Atlas’s head. Atlas fights back and hits a jawbreaker on Lumis, then a leaping backbreaker. Lumis goes to the outside and Atlas hits a tope on Lumis. Atlas throws Lumis back into the ring, but Lumis catches Atlas in a powerslam/submission combo and Lumis gets the submission victory.

Backstage, Keith Lee is shown getting ready for his title match. Then, we go to commercial.

Back from commercial, and we see the same video package for Killer Kross that interrupted Triple H’s meeting with Gargano and Ciampa last week.

Shotzi Blackheart and Deonna Purrazzo start off the match. Purrazzo kicks away at Shotzi, but Shotzi comes back with an enziguri, then a senton on Purrazzo. Blackheart went for a bulldog on Purrazzo, but Purrazzo reverse and takes her down.

Purrazzo hits a short-arm clothesline for a 1 count. Purrazzo strikes away at Shotzi against the ropes, then stomps on Shotzi’s face, covering her for 2. Purrazzo picks up Shotzi and tosses her into the corner, then taunts her in the corner.

Shotzi gets to the top rope, but Purrazzo catches her. Shotzi hits Purrazzo with a headbutt, sending her to the mat and following it up with a senton. Shotzi covers Purrazzo and eliminates her.

Xia Li is next, and Li hits Shotzi with a dropkick. Shotzi avoids Li’s strikes, but Li avoids Shotzi’s enziguri. Li finally downs Shotzi with a kick to the face, then we go to commercial.

Back from commercial, and Li is in control of Shotzi. Li takes down Shotzi with a running dropkick, then goes for a spinning kick to Shotzi. Shotzi avoids it and locks in an interesting full nelson submission, making Li tap out.

Aliyah escapes, covering Shotzi for two. Aliyah slammed Shotzi down to the mat by her hair. Aliyah grabs Shotzi by the hair and throws her into the corner. Aliyah his her with a boot to the face, then covers Shotzi for two.

Aliyah pushes around Shotzi and then grabs her hair. Shotzi grabs Alyah by the hair and kicks her in the face. Shotzi hits a dragon suplex on Aliyah, and then locks in the same submission hold on Aliyah, making Aliyah tap.

Kayden Carter is next, and Carter grounds Shotzi with a dropkick, covering her for two. Shotzi hits Carter with a facebuster on her own knee. Shotzi goes to the top rope, but Carter catches Shotzi in the middle rope and hits dropkick onto her in the corner, and we go to commercial.

Kai stomps on Shotzi’s throat, the pushes against her face with a boot in the corner. Kai hits Shotzi with a bicycle kick to the face, then covers her for 2. Kai drags Shotzi to the ropes and drives her face into the ropes. The referee pulls Kai back, and Gonzalez takes advantage, choking Shotzi against the ropes.

Kai hits a snapmare on Shotzi, then locks in a submission on Shotzi, wrenching on Shotzi’s arm and head. Shotzi reversed it into a pin, but Kai escaped and hit a pump kick on Shotzi, covering her for 2 again.

Kai hit a running boot to the face onto Shotzi in the corner, then kicked away at Shotzi. Kai went for a kick, but Shotzi blocked it and grounded her. Kai takes down Kai with a series of clotheslines and a back suplex. Kai rolls out of the ring and Raquel Gonzalez comforts her.

Shotzi hits a dive onto Kai and Gonzalez through the ropes. Shotzi tosses Kai back in the ring and, while the referee is distracted by Kai, Gonzalez grabs Shotzi and tries to push her into the steel steps. Shotzi escaped and pushed Gonzalez away. As she tried to get back in the ring, Kai catches Shotzi with a Go to Kick, covering her for the victory.

Backstage, Damian Priest is shown preparing for his match. Then, we go to commercial.

Back from commercial, and we get a video package advertising Charlotte Flair vs. Rhea Ripely at WrestleMania.

Kushida hits Wilde with a toehold and drops him to the ring. Kushida hit Wilde with a series of covers and goes for a Hoverboard Lock, but Wilde reached the bottom rope. Wilde hits a spinning headscissor takedown on Kushida, and follows it up with a submission hold on Kushida’s left arm. Kushida escapes and pins Wilde for 2, then we go to commercial.

Back from commercial, Wilde tosses Kushida to the mat. Kushida kicks Wilde’s arm and locks in the Hoverboard Lock, making Wilde tap out.

Backstage, Dominik Dijakovic is shown getting ready for his match. Then we go to commercial.

Back from commercial, we see more about the feud between Ciampa and Gargano.

Backstage, Jaoquin Wilde is interviewed about his match with Kushida. Some people in masks pull up in a van and force Joaquin Wilde into a van, similar to what happened to Raul Mendoza a few weeks ago.

Back from commercial and Keith Lee is nowhere to be found. Priest takes down Dijakovic and hits him with a DDT, but Lee breaks up the pinfall. Lee sends Priest out of the ring, but Priest catches Lee with a boot to the face. Preist goes to the top rope and Lee gives chase.

Lee went for a superplex, but Priest blocks it with knees to the face. Lee grabs Priest around the waist for a belly to belly suplex. Dijakovic his feet and gets Keith Lee in an electric chair. Priest hits a spinning heel kick on Lee, sending all three men to the ground.

Lee and Priest seem to form a temporary alliance, taking out Lee. Dijakovic and Priest work together to hit a double chokeslam on Keith Lee. Lee rolls out of the ring. Priest sets up for The Reckoning and throws him outside of the ring, into Lee. Lee and Dijakovic trade blows outside, and Priest follows it up with a flipping tope over the top rope. Then, we go to commercial again.

Back from commercial, and Damian Preist hits a chokeslam on Dijakovic, covering him for two. Priest went fora roundhouse kick, but missed. Dijakovic went for a chokeslam bomb, but instead toss him into Keith Lee. Lee hits a powerbomb on Priest, throwing him down on Dijakovic. Lee hits Priest with a Spirit Bomb, but Dijakovic breaks up the pin.

Both men go to apron and grab each other’s throats. Lee goes to the top rope and gets both men in position for a double superplex, but Dijakovic and Priest grab Lee by the throat and push him down onto the mat. Diajkovic kicks Lee off the ropes, sending him to the outside. Dijakovic hits a corkscrew senton on the top rope, covering Lee for two.

Damian Priest brings his retractable nightstick into the ring, but Djakovic dodges hit and hits a Feast Your Eyes on Priest, but Preist is still able to connect his nightstick with Dijakovic’s knee. Lee gets to his feet and hits a pounce on Priest, sending him out of the ring, then hits a Big Bang Catastrophe on Dijakovic, covering him for the victory, and retaining his championship

Keith Lee celebrates in the ring as NXT goes off the air.