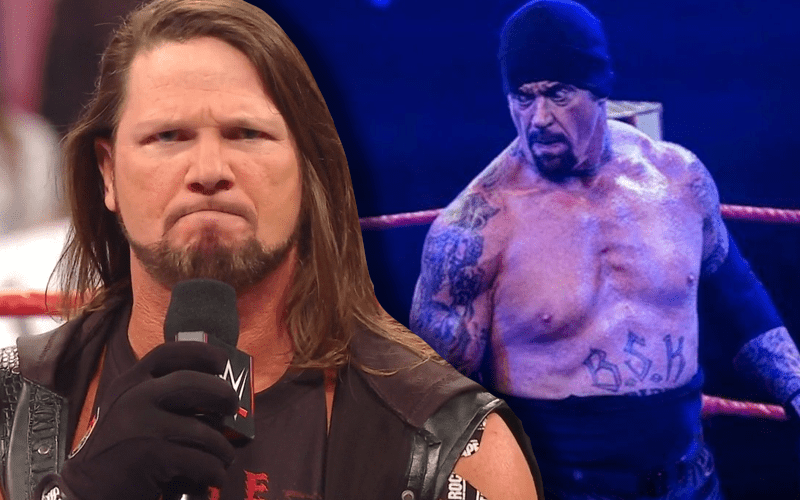 The Undertaker has been digging holes and taking souls for decades. He will face AJ Styles at WrestleMania 36 in a very unique match. WWE had to name this match very carefully.

WWE booked a Boneyard Match for WrestleMania. This match might seem familiar, but they had to go with this unique name given the current situation we’re all in.

While speaking on his Mixer, AJ Styles revealed that WWE wanted to stay away from saying “graveyard match” or “cemetery match.” This was due to current events. They wanted to be delicate, but they were still able to accomplish what they wanted without using those sensitive words.

“What the heck is a Boneyard match? Even I was wondering what a Boneyard match is. Under the circumstances, I think there’s a reason it’s called a Boneyard match. We didn’t want to say cemetery, graveyard. Let’s tread delicately on this. Everything that’s going on, it sucks. It’s a combination of things you thought it was, most likely. It’s going to be different. I don’t want to give anything away. I want you guys to enjoy this. Because of the circumstances, I’m so glad that my opponent is The Undertaker, because it’s an opportunity to have a different match. I don’t want to have it in an empty arena. You guys are the life blood of what we do. We react to you. It’s all about you. I wouldn’t be anything without you, but we know how to react based on how you react. All this stuff matters. I feel for the guys who have had to have those matches.”

The Undertaker and AJ Styles was shot away from the WWE Performance Center. This will be another match not filmed in a traditional pro wrestling style.

It will be interesting to see what they pull off. WWE didn’t want to be too morbid, but let’s just see what’s in the finished product.