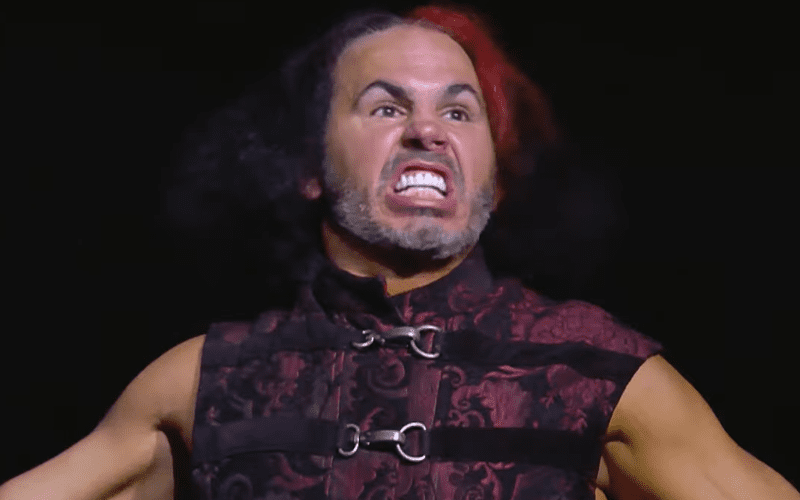 Matt Hardy sent Vanguard 1 out to find his Arcadia. This was the end of a Free The Delete video that he released during AEW Dynamite this week. Then Hardy showed up in an empty Daily’s Place not one hour later.

Vanguard 1 landed in the ring and marked Hardy’s debut. This wouldn’t have been able to happen if AEW had carried on with the original idea.

During Talk Is Jericho, Chris Jericho revealed that FCC regulations say that drones can’t be flown in the building. If AEW had carried on with the show in Rochester they had something else completely worked out.

“Here’s a little bit of trivia for everybody listening, had we been in Rochester, we wouldn’t have been allowed to fly Vanguard 1 inside the arena. Actual FCC, airport rules, for some reason you couldn’t fly a drone in there. We would’ve had done it on the outside, which would have been fine, but it’s one of those things. When it was happening, I couldn’t see it or I couldn’t hear it, and they just kept telling me to stretch stretch, so I’m talking like, ‘hey Orange Cassidy, you’re an idiot.’ Then finally, Matt Jackson goes, ‘hey, look at this.’ Finally it’s there. Had there been 6,000 people, somebody would’ve seen it prior and pointed, then there would’ve been that reaction but with nobody there it was really strange. There was nothing, until there it is.”

Matt Hardy then revealed the original plan had AEW been able to hold the event as scheduled in Rochester.

“It’s definitely different. Once again, if you have a Vanguard 1 drone flying in, it’s an inanimate object. Originally, the drone was going to fly back to me, and we were gonna get a really cool beauty shot, but that didn’t happen. I went ahead because we’re doing live TV. It was kind of like an audible.”

Matt Hardy is in AEW now and his first match appears to be the Blood & Guts match. Hardy will team with The Elite and take Nick Jackson’s spot as they battle the Inner Circle. Jericho and Hardy seemed to get along on the podcast, but it might be a very different story once they step in the ring.