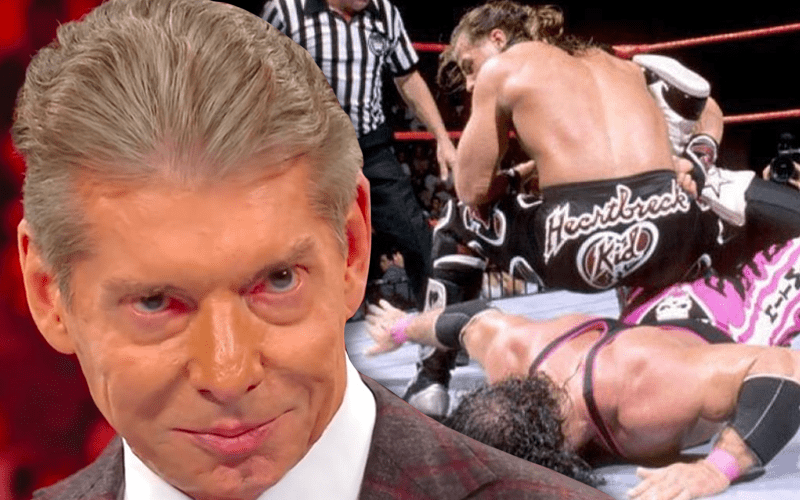 Bret Hart said “the real story” of what happened between himself and Shawn Michaels all started in San Jose.

While speaking on The Broken Skull Sessions, Hart said he was with Steve Austin, Triple H “and a bunch of other guys in triple threat matches and Shawn [Michaels] was the referee.” Then things went bad.

“We were ready to go to Montreal for the Survivor Series and I remember Shawn went to shake my hand — me and him had a little fisticuffs a few months before that — he came in to thank me for the match which is customary. We were shaking hands and I said, ‘Hey Shawn I just found out that we’re wrestling in Montreal and I just wanted to let you know that I’ll always be a professional in the ring and you don’t have to worry about me going off the rails or doing something to ya or trying to hurt ya’ because we’d had some friction.”

“‘I said I have no problem putting you over, no trouble dropping the title to you, I’ll do anything you want.’ The big problem between me and Shawn started right then when he said, ‘I appreciate that, but I’m just wanting to let you know that I’m not willing to do the same for you.’ Then he turned around and walked out of the dressing room.”

Austin remarked that comment from HBK “rubbed you the wrong way.” Hart replied saying that he doesn’t know anyone who would say that to anyone willing to put them over in such a way.

Hart said he saw Vince McMahon in Tulsa, Oklahoma the next night on Raw. McMahon didn’t know if Hart was leaving WWE at that time, but he informed him that Shawn Michaels would be winning the title at Survivor Series.

WWE gave Bret Hart creative control in the last 60 days of his contract. He told Vince McMahon that he wasn’t willing to drop the title to Shawn Michaels because the Heartbreak Kid wouldn’t do the same for him.

Steve Austin asked Hart if he “worked yourself into a shoot.” Then Bret Hart said “it was more of an honor thing.”

Bret Hart had creative control in the final 60 days of his contract so his opinion on the situation mattered. He wouldn’t let HBK beat him. McMahon tried to call HBK into the office, but he couldn’t find him. He wanted Bret Hart to tell the same story in front of Shawn Michaels.

Vince McMahon told Bret Hart that they were going to get to the bottom of this.

When McMahon finally met with Hart and Michaels, he told Shawn that he was getting the title. The story had suddenly changed. Bret Hart didn’t like that at all, because that wasn’t the deal he agreed on.

“I was waiting for Vince to lead into it [during the meeting with HBK] and he just goes, ‘Shawn we’re putting the title on you.'”

Bret Hart stood up and voiced his objection. This seemed to fall on deaf ears because Vince McMahon was determined for Bret Hart to drop his title to Shawn Michaels.

Hart said he didn’t see Shawn Michaels again until Survivor Series. All of this eventually created the perfect mixture for the historic Montreal Screwjob.