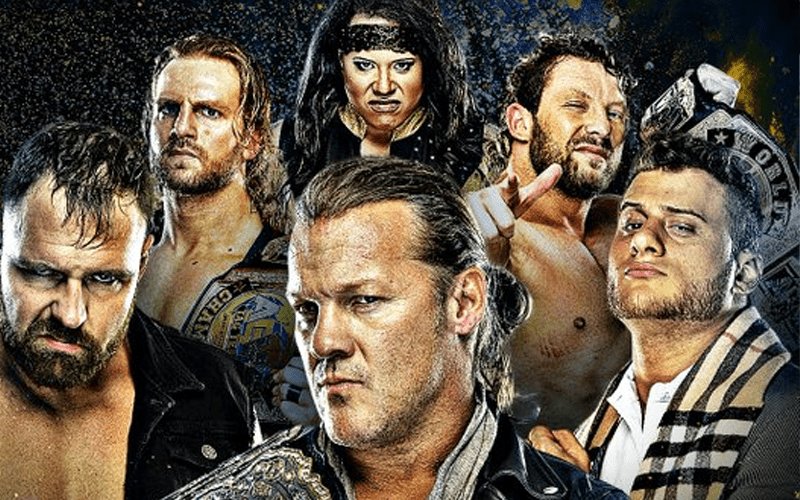 Welcome to our live results for a very special episode of AEW Dynamite.

Of course, in light of the current situation, tonight’s Dynamite will be taking place behind closed doors with no fans in the arena. However that isn’t stopping AEW from continuing with the show it already had planned.

As of now, AEW has a few matches planned; The Inner Circle Vs. The Elite; Best Friends Vs. Lucha Bros – unclear if that means PAC and Cassidy are at ringside; and Jurassic Express Vs. The Butcher & The Blade. On top of that, the Exalted One is set to be revealed, which will be odd with no fans present to react.

Well that’s the preview for Dynamite. We’ll have all the live results right here, from 8 PM EST. So follow along and enjoy the show!

Dynamite opens with Cody standing in the darkened ring, with no fans. He says he’s never felt so small. It never dawned on him how important the service they provide is. And the irony of what he’s about to ask his not lose on him. He says he’s asking three stars to put aside their differences and put on a show. Cody says we need to stand at a distance and stay indoors, but there is a difference between that and living a life in a prison. In fact, he’s felt more alive than ever.

Cody mentions Matt Jackson, and says he needs him to put aside his anger towards Adam Page. Speaking of whom, Cody says he is tired of putting over Hangman Page, he constantly calls him the best performer in The Elite. He thought he’d be the first AEW Champion but he lost to Chris Jericho but guess what, so did he. And it’s time for Page to get over it.

As for Kenny Omega, he’s probably his most unique friend. He says the two of them don’t always get along and they’ll probably argue who’s number one until someone passes them by, but he needs him to be his very best. In all, he needs The Elite to be elite. Kenny and Matt come down to the ring.

Kenny says normally you’d be speaking to an arena full of people but tonight they’re just friends talking to friends. He says him and Cody have been at each others throats, but here they are, with the world falling down around them, unsure if they’ll even have a Dynamite next week. But if it’s up to him, he wants to go out like they came in.

Matt grabs the microphone and says he appreciates Cody’s call to arms but…it’s just the three of them in an empty arena. His brother couldn’t make it, and he asks where Page is. Hangman comes out onto the stage and Jackson says he knows things have been strange and he’s not saying they have to fix it tonight, but he’s asking him if he’ll stand with The Elite. Hangman holds up a glass of whiskey and nods before walking away.

Omega says it’s hard to do a show without fans, but the world needs some positivity right now. So it’s time to hit the lights, hit the pyro, and get Dynamite underway!

Tony Schiavone is with MJF at ringside. He asks why he’s here and MJF says it’s because he doesn’t have to wrestle tonight. He says it’s not worth the money AEW is offering to get in there tonight. But it’s fine because it allows the “undercard” talent to get some screen time. MJF takes some money from Shawn Spears, who turns out, is sitting nearby. Tony asks if they’re betting and MJF blows a gasket…then asks if he wants in on the action.

The match begins with Trent and Rey Fenix. They lock-up and Trent forces Rey to the corner but Fenix turns the tables. Trent chops Rey, but eats one right back. They trade forearms until Rey delivers a kick and an elbow. Trent comes back with a meteora and tags Converse.

Best Friends drop Rey with a double shoulder tackle. Chuck beats Rey down, then tags Trent again, meanwhile Orange Cassidy is asleep by the commentary table. Taylor is legal again and he connects with a dropkick. Trent tags back in but Fenix kicks him down, then Pentagon tags in and they deliver superkicks to Trent for a two-count.

Pentagon kicks Trent and applies a submission to get him grounded. Fenix tags in and the Lucha’s hit a wheelbarrow splash and a dropkick to knock Taylor off the apron. The action spills from the ring and Taylor turns Fenix inside out with a clothesline as we head to the break.

Back live and Fenix is beating on Trent against the ropes. Pentagon tags in and delivers a superkick to Trent for a two-count. Trent counters a pumphandle and hits a tornado DDT to create some distance. Chuck gets the tag and so does Fenix.

Taylor with some clotheslines and a tilt-a-whirl backbreaker but Pentagon delivers a big chop. Taylor connects with a knee to Pentagon, then throws Fenix up for Trent to land a cutter. Best Friends look to hug each other but stop and touch elbows instead, some good social distancing.

Pentagon and Fenix attack them from behind, then get Taylor on the ramp and look to hit the assisted piledriver but Cassidy steps up to stop them. The distraction allows Taylor to shove them off the stage, then Cassidy hits them both with a dive off the stage and the referee didn’t care. Taylor gets Fenix in the ring and hits a piledriver for a near-fall. Pentagon hits Trent with a low blow, then they hit the package piledriver for the win.

Tony Schiavone interviews Trent, Chuck, and Cassidy on the stage. He asks them for an impression of Death Triangle. Chuck calls them out for “kicking my friend in the dick”. They say they want to fight Death Triangle in the parking lot on next week’s Dynamite.

Ford and Riho knock Shida from the ring them start fighting each other. Ford gets Riho in the corner and hits a running splash. Riho counters Penelope and gets a roll-up but Sabian helps her free. Riho knocks Sabian from the apron with a knee, then Shida drops Riho with a knee. Statlander returns to break a pin attempt from Ford, then she hits Shida with a roundhouse and a front suplex.

Riho went for a roll-up but Statlander got her up in an electric chair and dropped her onto Shida. Ford hits Statlander with a reverse hurricanrana! Ford hits a back handspring but Shida dropkicks her in mid-air. Shida hits a Falcon Arrow for a near-fall. Shida connects with a running knee and wins.

Tony Schiavone interviews Colt Cabana at ringside and he says he’s scouting. Colt says he is the Bruce Springsteen of AEW. He says he’s got a front row seat and he puts over Penelope Ford, but says she’d be better without Kip Sabian. He’s still there however, and he comes over and shoves Cabana, but Colt slaps him.

We see a video of earlier today, when Jon Moxley left the building because he wasn’t allowed to compete. He says he doesn’t care about being medically cleared, he’s never been fit to compete. He’s going to take a drive and blow off some steam, but he’ll always be in The Inner Circle’s blind spot. He gets in the car Jericho gave him and drives off.

The Butcher & The Blade Vs. Jurassic Express

The match begins with Jungle Boy and The Blade locking-up. Blade chops Boy in the corner but JB comes back with a springboard arm drag. Blade drops JB with a kitchen sink knee and beats him around until Luchasauras tags in. We see Joey Janela, Colt Cabana, and Sonny Kiss watching at ringside, as well as MJF and Shawn Spears.

Luchasauras beats on Blade, then tags Jungle Boy, who knocks Blade from the ring. Butcher and Blade regroup at ringside, but Jungle Boy jumps onto them…only to be caught and tossed into the barricade. They lift him and slam him into the apron, before putting him back in the ring. SCU have also joined the others at ringside.

Butcher tags in and takes a headlock on JB. Boy tries to fight up but Butcher rubs his head along the top rope before tagging Blade again. Blade connects with a big clothesline for a two-count, then tags Butcher to hit a sidewalk slam/leg drop.

Back live and the heels are still beating on Jungle Boy in their corner. Blade hits a snapmare and drives an elbow into JB’s neck. Blade hits a tilt-a-whirl backbreaker for a two-count. Jungle Boy hits a springboard back elbow to finally create some distance. Blade prevents the tag with an elbow drop to JB.

JB is tossed from the ring and Butcher slams him into the apron, then back into the ring. Jungle Boy gets put in the corner but he kicks Blade and Butcher back before leaping to tag the dino. Luchasauras comes in hot with kicks to Butcher and Blade, then dives off the ropes to Butcher on the floor.

Luchasauras hits a face-slam to Blade, followed by a question mark kick. Luchasauras hits the Extinction Event but Butcher breaks the pinfall. Butcher tosses JB onto Blade but they botch the spot and both men tumble from the ring. Butcher beats Luchasauras against the ropes but the big man comes back with a leaping kick to the back.

Luchasauras grabs Butcher by the throat but Blade hits him from behind. The heels plant Luchasauras with a slam but JB breaks the pinfall attempt. Butcher hits a backbreaker to JB and look to hit a double-team move but Luchasauras prevents it and hits the Tail-Whip. Jurassic Express hit their finish for the win.