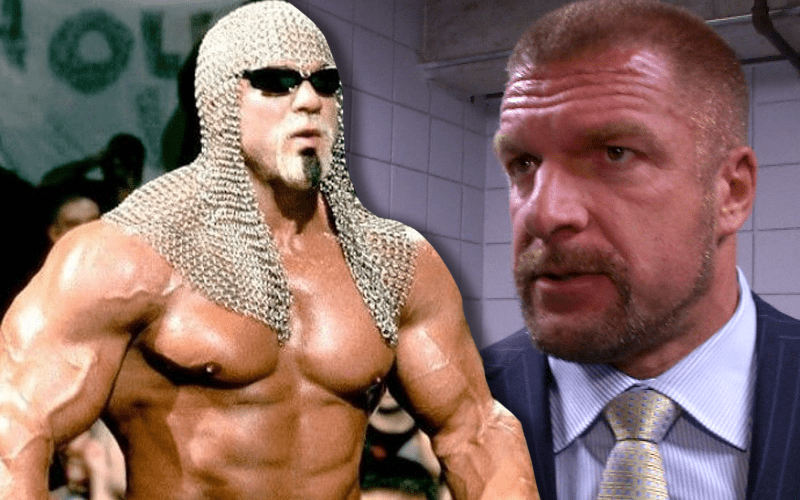 Scott Steiner experienced a fair amount of success in WCW and TNA. He had a run in WWE as well, but it’s probably not a good idea for him to expect any reunion invitations.

While speaking to Sitting Ringside, Scott Steiner was asked about his run in WWE. He then unloaded about what happened to him in Vince McMahon’s company. He pointed a finger directly at Triple H and didn’t hold anything back.

Steiner continued to call Triple H “a mark.” He also said that “banging the boss’ daughter” helped the WWE COO achieve his status. Big Papa Pump said The Game has “done nothing” in his career to warrant burying so many former WCW stars. Now it is “biting them in the ass.”

“Same thing went wrong [for me] that went wrong for everyone else that went from WCW. Look what he did, Triple H beat everybody. Kevin Nash went in and look what he did he had a DQ and then he got beat. Sting got treated worse, he had one match with him and he was done.”

That’s the thing when a guy’s a mark and he wants to beat everybody and he was a legitimate p*ssy. I mean, Wikipedia don’t lie. I mean seriously. Look what he’s done… nothing!”

“Then he got into professional wrestling and that was his time to shine. Of course, it does help banging the boss’ daughter so you know, he took advantage of everything that he could and he beat everyone from WCW. Why?!”

“They treated everyone like sh*t and we’re all in the same business. You know, wrestling is a small knit community, you know it’s a brotherhood. But you’re gonna treat us bad because we wrestled for somebody else? I mean it made no sense but now it’s biting them in the ass.”

“They would kill — f*cking kill for half the ratings that they had when we had the Monday Night Wars. Look at em, it’s biting in the ass and f*ck them. They got what they deserved.”

Steiner then followed this up by saying that he’s “so mellow right now.” It didn’t sound like he was too “mellow” when Triple H came up in the conversation.

You can listen to Steiner’s remarks embedded in the audio below.