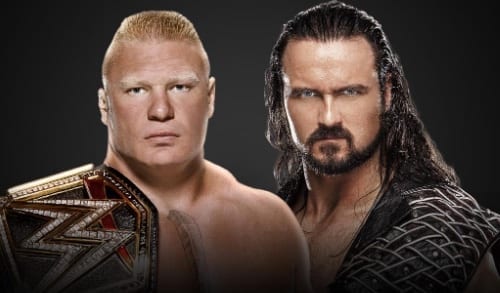 As seen on Sky Bet, the betting odds for Brock Lesnar vs Drew McIntyre at WrestleMania 36 have been released.

This WWE Championship battle has been gathering some real momentum ever since it was first confirmed to be taking place at the Royal Rumble. Now, with just weeks left until the showcase of the immortals, the anticipation is building as McIntyre attempts to become the first Brit to become WWE Champion.

This past Monday night on RAW, he certainly made a statement by laying out Lesnar – who seemed to be visibly shaken up from the attack.

In terms of the betting odds, McIntyre is currently priced as the strong 2/5 favorite to walk away with the belt, whereas Lesnar is currently a 7/4 underdog to leave WrestleMania as the champion.

While Brock did lose to Seth Rollins in decisive fashion at WrestleMania 35 last year, he had gone 3-0 at the show of shows in the three years prior to that with wins over Dean Ambrose, Goldberg and Roman Reigns.

There are still many different directions that this feud could go in between now and the big night, but for the time being, things are looking good for McIntyre.