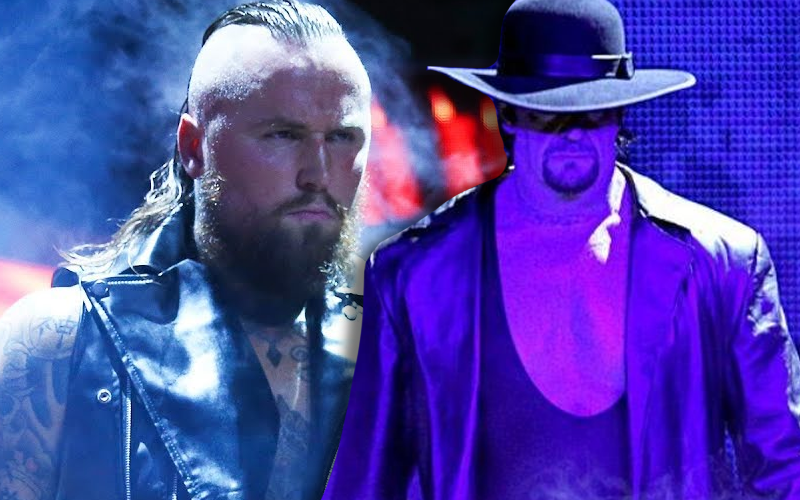 The Undertaker’s entrances are iconic and usually amazing spectacles. One prop was made for the Dead Man that he never used, so Triple H re-purposed it.

During his appearance on WWE The Bump, Aleister Black revealed that the lift that raises him during his entrances was originally built for The Undertaker. Thankfully, Triple H was able to come up with another use for it.

“So they created this, like, stage for me that I feel as soon as the lights go and the candles come up, the audience knows what time it is now. They did such a good job in priming the audience to know and realize that when this is happening, everything changes. The landscape almost changes like, the lights change, the candles come up, it gets really dark, there’s fog, and the entrance is obviously completely different.”

“I was talking to Triple H about it and he showed me this construction, which is of the thing that propels me, and it was actually meant for The Undertaker.”

“He said, ‘We don’t have any use for this thing right now, what do you think?’ I’m like, ‘I’ll take it.’ It was one of those things where I could formulate something around this entrance where Aleister Black will just appear from nowhere. People think it’s a coffin but it’s not, I’m just propelled out of a void, I just come out of nowhere. I materialize and that’s the idea behind it, that I materialize. Same as the room, the room’s a non-existing place. I materialize from that to that. It has hints of supernatural.”

Aleister Black’s entrance is working very well so far. We can only imagine that his lift will be with him for years to come. That lift was almost destined to be his at this point. It just makes you have to wonder how different things would be if The Undertaker would have used that lift instead.