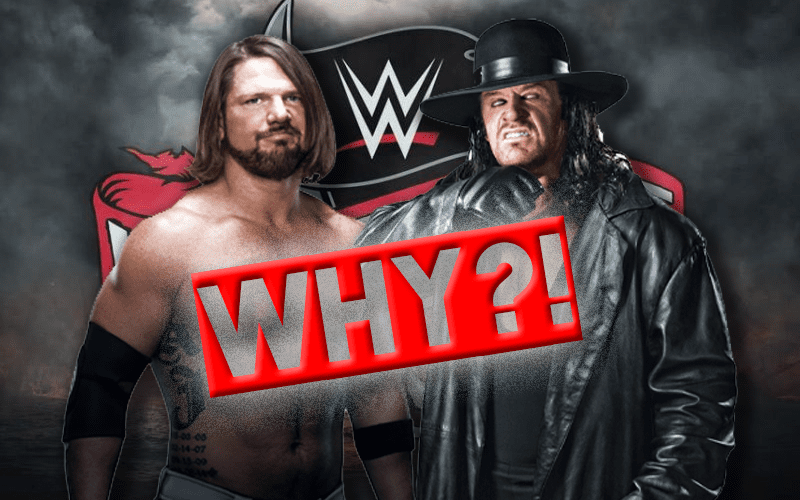 The Undertaker hasn’t wrestled since Extreme Rules last year. He won his last match tagging with Roman Reigns vs Drew McIntyre and Shane McMahon, and he’ll be back for WrestleMania.

We previously reported via Wrestling Observer Radio that John Cena has a WrestleMania opponent that is so “underwhelming it’s ridiculous.” Dave Meltzer couldn’t explain why WWE booked that match for Cena, but he did have some good reasons why Styles vs Taker is going down.

“At least in some ways I can understand that match. At least #1 AJ Styles is a heel. #2 AJ Styles can lose to Undertaker and it ain’t gonna hurt him at all. #3 If you’re gonna have Undertaker in match you might as well have it against one of your best guys so it doesn’t suck, you know what I mean?”

“You know and one things is most guys really that wrestle Undertaker and lose doesn’t really get hurt by it. The way AJ’s been positioned it’s not gonna hurt. So, it’s just a way to get Undertaker on the card.”

The Undertaker could make his presence known at any time. Odds are it won’t happen until after Super ShowDown because AJ Styles is currently out of action nursing a separated shoulder.

Styles is slated to compete in Saudi Arabia, but The Undertaker is not.