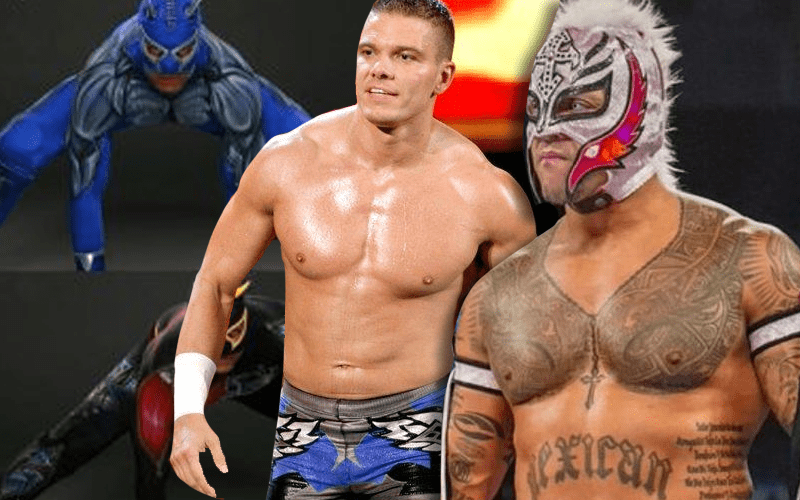 Tyson Kidd had an idea about how he wanted to make a return to the ring. He wanted to debut a masked character and he knew exactly who to call.

While on WWE The Bump, Tyson Kidd revealed that when he was still competing he wanted to debut a character called “TK1.” This masked persona would be kept separate from the Tyson Kidd who was on Total Divas at the time, but the fans would know who’s under the mask.

Kidd said that Rey Mysterio helped him get the gear together. Then Kidd’s artist airbrushed the designs on his ring attire. They even took some photo shoots, but the character never came to be after WWE figured out something else to do with Kidd on television.

“I was out with knee surgery and I was talking with Rey about reinventing myself. While I was out with my knee injury, that’s when Total Divas started so I thought it would be cool to wrestle on WWE TV in this outfit, in a mask, but then see the backstage segments where I don’t have a mask. I kinda wanted it to be different like you know it’s me. You know it’s a new version of me. You know it’s Tyson Kidd under there so you know it’s not somebody brand new to the roster. It’s like a fresh coat of paint — literally with the airbrushing.”

“Rey Mysterio, he got me those outfits and I found my airbrush guy and he’s the one who designed them.”

“I had a little bit of inspiration from [Finn Balor] I had seen him and was following him in Japan and of course, Rey Mysterio has influenced everybody and he’s used to it, Rey he’s literally a pioneer and one of the best of all time. So, when he’s giving me these outfits I wanted to do with them the best that I could. It got pretty close to happening I think, but somehow I found myself involved in the women where I was managing Natalya for a little while and then out of nowhere I showed up on RAW and Cesaro and I were teaming up and magically this chemistry was instant and I wasn’t worried about TK1 anymore.”

Cesaro spoke openly about why his team with Tyson Kidd worked so well. That run for Tyson Kidd would be his last as he suffered a neck injury after a Muscle Buster from Samoa Joe.

It makes us wonder if Tyson Kidd would still be wrestling today if WWE would have given him to green light for the TK1 character. You can check out shots of Kidd in the TK1 outfits below.