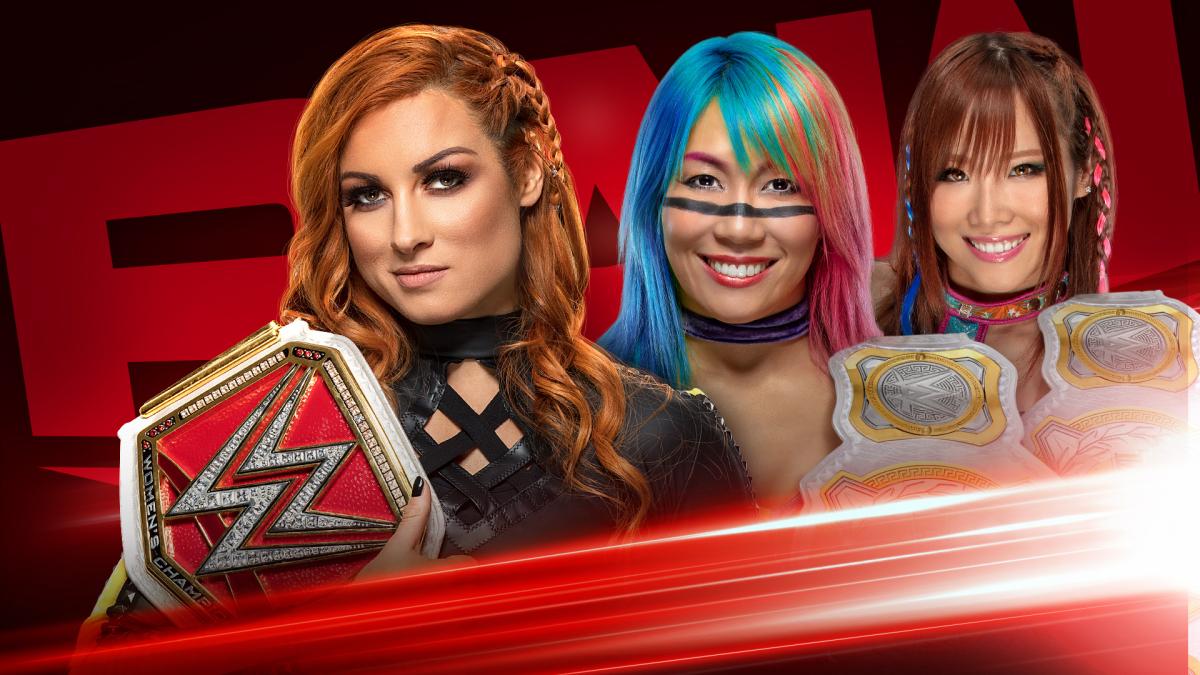 Welcome to another round of live WWE Raw Results from Ringside News.

Tonight’s show will be headlined by another Women’s Championship bout between Becky Lynch and Asuka. This match kind of came out of nowhere and could be used as a springboard to set-up a WrestleMania showdown. Lynch doesn’t have any clear opponents for WrestleMania, unless Shayna Baszler debuts soon, so Asuka is the only real option. If that’s the case, then it would have made a heck of a lot more sense to have Asuka beat her at Royal Rumble and have Lynch desperately chase the title at WrestleMania.

Also tonight, Samoa Joe is back to team with Kevin Owens and The Viking Raiders to face Seth Rollins and his disciples. This feud is running dangerously close to becoming overwrought, as we’re seeing the same people fight every single week. By the time WrestleMania rolls around we’ll be pulling our hair out.

Elsewhere tonight, Angel Garza will be in action again with Zelina Vega by his side, and Ruby Riott may explain her actions from last week when she attacked Liv Morgan. And we can expect Drew McIntyre to respond to Brock Lesnar’s attack last week.

Monday Night Raw opens with The Monday Night Messiah and his disciples already in the ring.

Seth welcomes us to the show and says he is proud to stand here as our messiah. He say’s he wasn’t sure about that name at first but it has grown on him as he realised how hard it is for the average person to speak their truth and make tough decisions. Seth directs us to the footage of last week when AOP and “Murphy” defeated Kevin Owens and The Viking Raiders via nefarious means.

Seth says that wasn’t enough for Owens and co. because they interfered in his match later than night and cost him a shot at Brock Lesnar. Rollins says his patience is wearing thin. He says he wants to spread his message of peace and progression and won’t leave the ring until it is heard.

Kevin Owens comes out alone to the stage. Rollins tells him to be careful because his friends are dropping like flies. He tells KO that there is nothing he can do to stop his progress, so he can be a martyr if he wants but he’s going to fall alone. Owens says Seth comes out every week and sounds stupid as hell, and now he looks it as well. Owens says reiterates that Seth talks too much and what he does is keep fighting. And Seth is wrong, he is not alone. The Viking Raiders come to stand alongside Owens.

Seth says that KO’s problem has never been finding partners, it’s about keeping them upright. Owens then turns and shoves both Erik and Ivar and says they seem pretty damn solid to him. And they’re as sick of hearing Seth talk as he is, so….

AOP and Murphy leave the ring to fight with Owens, Erik and Ivar on the outside. Samoa Joe then runs into the ring from behind and gets Seth in the Coquida Clutch! AOP and Murphy storm the ring to save their messiah but Owens and the Vikings clear the ring. Owens hits Murphy with a Stunner and he rolls from the ring.

THE MAN IS HERE, and THE MATCH IS NEXT.@BeckyLynchWWE is moments away from defending her #Raw #WomensChampionship against @WWEAsuka! pic.twitter.com/VRuv9wwxRN

The Man, Becky Lynch comes out, interrupting Joe, Owens, Erik, and Ivar’s celebrations. All four men just up and leave the ring. Lynch will be defending her Raw Women’s Championship after the break!

The bell rings and the two foes engage in a lock-up, with Lynch taking the waist. Asuka reverses into a headlock but Becky shoots her off and gets dropped with a shoulder. Becky gets back to her feet and takes Asuka down with a headlock. Asuka fights up but Becky drops her with a shoulder and poses.

Asuka forces Lynch to the apron and Kairi Sane jumps up in front of her. Becky tries to kick Kairi off but she jumps down, allowing Asuka to connect with a hip attack and knock the Champion to the floor.

Back live and Asuka stomps Becky down before applying an armlock. Becky fights up with forearms and hits the ropes but Asuka connects with another hip attack. Becky elbows Asuka back before connecting with two lariats and a heel kick.

Lynch kicks Asuka before hitting a flying forearm for a two-count. They exchange reversals before Asuka lands a knee to the face, followed by a modified sit-out spinebuster for a two-count. Becky sidesteps Asuka, sending her to the outside, then dropkicks her through the ropes into the barricade.

Lynch gets on the apron and dives at Asuka with a forearm but Kairi shoves Asuka out of the way and takes the shot herself. Asuka then attacks Becky before getting her back in the ring. Asuka connects with a Codebreaker for a near-fall. Asuka sends Becky into ring post, then attempts a hip attack to Becky on the apron but Lynch dodges and applies a Dis-Arm-Her over the ropes!

After releasing due to the referee’s count, Lynch looked for a suplex on the apron but Asuka countered it. Becky then counters Asuka to hit a reverse DDT on the apron and both women are down!

Back live and Asuka hits Lynch with a superplex for a near-fall. Asuka applies an armbar to Becky but the Champion turns over and lifts Asuka up and slams her to break the hold. Becky climbs the ropes and attempts a leg drop but Asuka avoids it and gets her in the AsukaLock!

Becky fights it and manages to get to her feet and roll Asuka up for a two-count. They exchange more pin attempts until Lynch hits a Rock Bottom and wins.

As soon as the match ends Becky poses with her title…until Shayna Baszler attacks her from behind! Baszler gets in full mount and beats on Becky, before lifting her in the Kirifuda Clutch and throwing her to the ground. Baszler then takes her gum shield out and bites the back of Becky’s neck! The referee pulls her off and there’s blood pouring from Shayna’s mouth. Becky writhes in pain and Baszler leaves up the ramp. Becky says “Jesus Christ, did that bitch bite me?”

♠ SHAYNA CAME TO PLAY. ♠@QoSBaszler is on #Raw making a STATEMENT at the expense of @BeckyLynchWWE! pic.twitter.com/YWadnRnNpB

We see Becky Lynch backstage, being attended to by medics and forced to a hospital.

Rawley starts against Dawkins and eats a dropkick right away. Mojo turns the tables and slams Dawkins before tagging Moss. Dawkins drops Moss right away and tags Montez Ford, who hits a frog splash for the win.

After the match, the Profits leave through the crowd, while Mojo Rawley helps Riddick Moss to his feet…only for Moss to pin him! Riddick Moss is the 24/7 Champion.

Once again we see Becky Lynch and she’s still resisting being put in an ambulance. Finally she agrees but then shoves the female paramedic and kicks the door closed. Becky then pulls the driver out and drives the ambulance off herself.