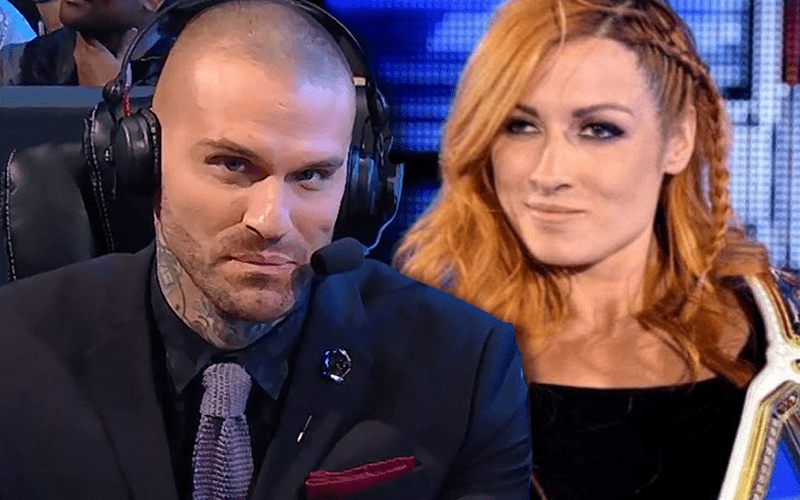 Becky Lynch became The Man in 2019 and she used that moniker to become Becky Two Belts at WrestleMania 35. A year later Corey Graves is concerned that WWE has taken that character as far as it can go.

During After The Bell, Corey Graves voiced his fear that the WWE Universe is tiring of The Man character. She’s done a lot in the past year, but pro wrestling is a cynical business and perhaps it’s time for another evolution for Becky Lynch.

“It is my concern that the WWE Universe is beginning to tire of ‘The Man.’ This is historically a common occurrence in WWE.”

“When someone reaches megastar status, as Becky has over the last year-plus, people tire of them. Look no further than John Cena, Roman Reigns, more recently, Ronda Rousey, who was beloved when she arrived in WWE but by the time WrestleMania came around, even before that, WWE was tired of her. Seth Rollins, last year, no one could wait for him to Brock Lesnar. He beats Brock Lesnar, becomes the guy, and everyone goes, ‘what else you got?’ This isn’t Becky’s fault. It isn’t anyone’s fault. It’s an occurrence.”

“It’s a cyclical business and maybe it’s time for an evolution, another step, another layer to ‘The Man.’ If anyone can give it to us, I’m sure it’s Becky Lynch. But as of this past weekend, Becky Lynch is no longer the underdog.”

“Before she became ‘The Man,’ everything that propelled Becky to superstardom is ‘she wasn’t getting her just due.’ She had passion, heart and talent, but was never taking that next step. She created her own path, there’s no denying she’s still a megastar. I’m just wondering if we’re beginning to see the rumblings of a bigger movement.”

Becky Lynch experienced some doubt before Royal Rumble, but she was able to defeat Asuka. The next night on RAW her cocky persona was back and now she considers herself the GOAT.

We’ll have to see what’s next for Becky Lynch in WWE, but Corey Graves might be on to something. A Superstar needs to experience a fair amount of evolution during their career to sustain relevancy. Just ask other men who fans consider GOATs like Chris Jericho and Daniel Bryan.