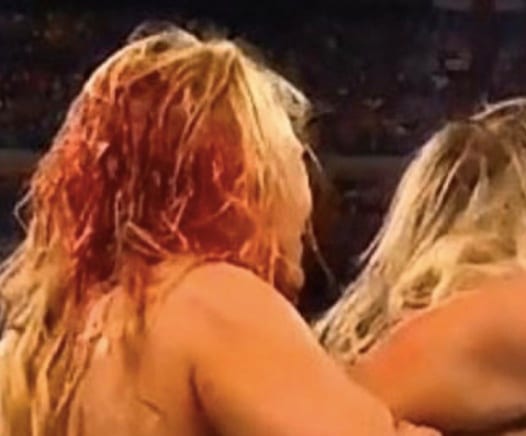 The women’s Royal Rumble match didn’t quite seem to pick up as much steam as the men’s Rumble match, mainly due to the polarizing reaction to Charlotte Flair being the victor.

However, one thing that became clear as the match progressed is just how much of a warrior Beth Phoenix really is. She may not have won the whole thing, but she certainly had an important part to play in how it all worked out.

One thing that a lot of people noticed was the blood coming from her head, which seemed to temporarily stain her hair red.

Phoenix clearly sustained some form of injury in the match, but despite the pain she must’ve been in, the adrenaline got her through and she wound up putting herself on the map for a potential match at WrestleMania once again this year.

Nattie and Beth always produce great work together and it’ll be interesting to see what, if anything, WWE is going to have on the cards for them as we look ahead to the Road to WrestleMania.

Aside from her own success at the Rumble, Beth will also be pretty pleased today that her husband, Edge, was finally able to return to the ring after months of uncertainty regarding whether or not he’d be able to come back.

The two could, all of a sudden, become one of the most powerful couples in WWE, which would’ve seemed like a bizarre notion just a matter of months ago – but now, not so much.