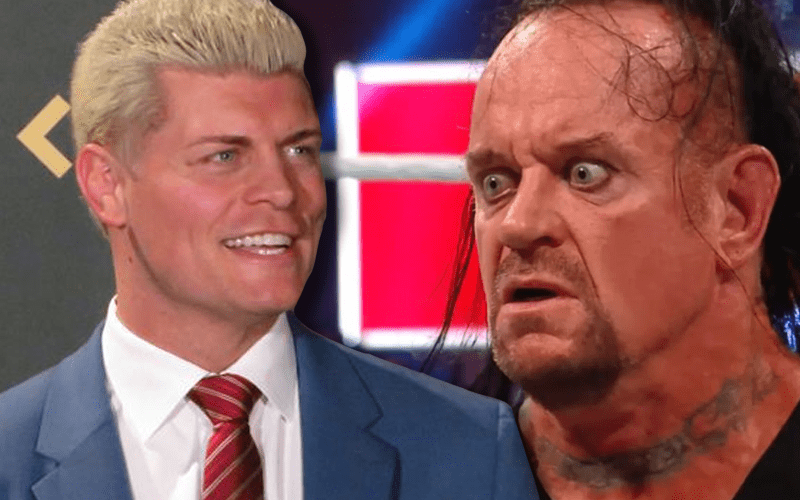 Cody Rhodes isn’t in WWE anymore, but odds are he’ll be watching the 2020 Royal Rumble match. The Undertaker is rumored to be at the Houston event, but we’re not sure what he might be doing.

While speaking to Inside The Ropes Cody Rhodes told a story about dealing with The Undertaker in a Royal Rumble setting. It was Cody’s first Rumble match and he stiffed The Undertaker. Despite that, The Dead Man was rather giving.

“I’m in my first Royal Rumble in Madison Square Garden and CM Punk comes up to me and says, ‘I’m out before you’ — I think I was 12 and he was 11 — ‘Is there anything when you get in that you want to do? You’ve got to talk to somebody. That’s your time. That’s your moment to stand out.’ I was this plucky, underdog good guy. New York was likely going to be indifferent or just boo me. The music hits, it’s the short Garden entrance, I run, get in there and everything is going actually okay. They didn’t boo me, they didn’t really give a shit either, but they didn’t really boo me. So we do this spot and I almost dump Punk over and 2.7 seconds have gone by. It was that quick.”

“I feel the camera on me and I can see myself on the screen. I see Undertaker in the corner. I thought….fuck it. I’m gonna do it. I go over and I hit this man as hard as I’ve hit anyone in the back of the head. I felt him stop. [He does the slow head turn]. I’m the bad guy now. I’m [backing away]. All of a sudden he goozles me. I think I’m going up. He says, ‘kick me in the knee.’ I kick him in the knee, he lets his hand go. And he goes, ‘dropkick me.’ I jump up, dropkick him, HE TAKES A BUMP! You can see…I didn’t know what to do. The goal is to get the guy out of the match, but I’m not gonna pick him up.”

“So I just go over to the corner and start fake punching somebody. But man, after that, Taker was God to me. Everything about this guy is about giving back. He absolutely did not need to do that. Plus, I stiffed the hell out of him. I love The Undertaker.”

We will have to see what kind of interactions The Undertaker might have in the future that others will tell stories about. He certainly made an impression on Cody Rhodes which created a memory that will last forever in the form of this story.