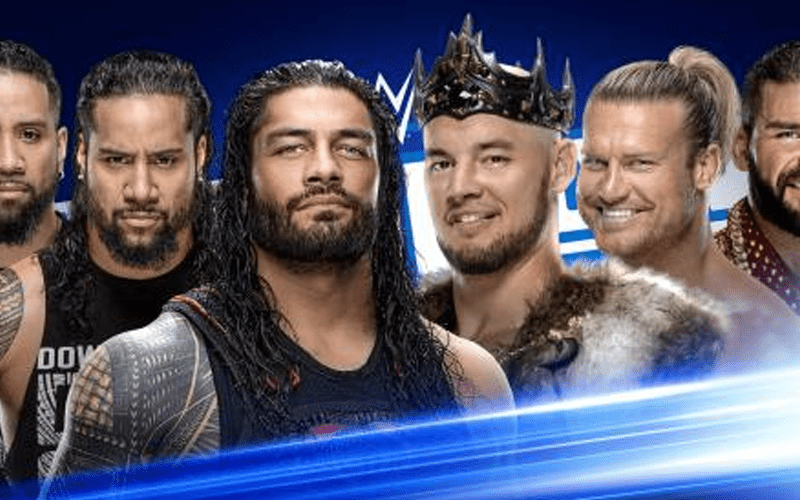 Tonight is WWE’s final opportunity to build anything on television before the Royal Rumble this Sunday. There are only two segments announced for the show so far.

The Usos and Roman Reigns are going to take on King Corbin, Dolph Ziggler, and Robert Roode in a six-man tag team match.

Daniel Bryan and Bray Wyatt will also sign a contract for their Universal Title Strap Match at the Royal Rumble.

The Usos got the advantage early on and then Roode backed Uce in the corner and stomped down on him. Jimmy chopped back and was sent to the apron. He slipped and went to the floor and then Ziggler drove him into the post and stairs.

The referee backed everyone up and everyone checked on him. It got really awkward as Jey kept saying to “Check his head.” They let Jimmy off and he walked off as the crowd gave him a smattering of applause.

The babyfaces soon started selling as Jey took damage from everyone as they tagged in and out. Jey eventually landed a kick to the head and then Roman got peeled off before he could tag and they sent him into the barricade.

When we got back from commercial Jey was still taking a beating and Roman was still selling on the outside. Then Corbin took a shoulder to the post.

Roman jumped back up on the apron and he tagged in to rally. He hit a bunch of clotheslines and then Roode distracted the referee so Corbin could land a poke to the eyes and then Ziggler super kicked him for the two count.

Michael Cole made note to say that anything goes during a falls count anywhere match as Reigns got stomped on outside the ring.

Reigns continued to sell as this match reached thirty minutes in length. They tagged in and out and continued laying in strikes and then Roode tried to get a Glorious DDT, but Roman rolled him up and then lifted him up to slam him down. Roode sold and Roman laid there as Jey hyped up the crowd.

Ziggler pulled Jey off the barricade and sent him across the ringside area and over the announce table. Roman was all alone again as Corbin punched him in the corner and Ziggler tagged in.

Ziggler hit a neckbreaker for a two count. Dolph hyped for the sweet chin music and took a Superman Punch to the face from Reigns, but nobody was there to tag. Then Jimmy Uso came limping/running down. He took the tag and Jimmy was the hero Uce.

Jimmy hit a Samoan drop on Roode and hit a dive on Corbin. He knocked Ziggler off the apron and hit a crossbody on Roode for a two count as Corbin broke it up.

Roman hit a Superman Punch on Corbin and then he beat Corbin around the ringside area and threw him over the barricade. Then they fought in the crowd as Cole hyped their falls count anywhere match at the Royal Rumble.

Jimmy got to the top rope and Ziggler got kicked off and then Jey jumped off the announce table onto Ziggler. Jimmy hit the Uso Splash for the win.

Lacey Evans came out and Michael Cole quickly got her to talk about her dad dying due to addiction. She said that it doesn’t mind what cards you are dealt, but you can do whatever you set your mind to. She got emotional and started to cry and the crowd was 100% behind her. It doesn’t matter what you’re going through because you can do it. She mentioned being in the Marines and it leading her to WWE.

She wants to be a leader that inspires people. If you keep pushing you can accomplish your goal. You can show the world what you can get through. She will continue to set that example and she’ll be that champion. Cole brought up her daughter Summer and they showed a clip.

Evans said she was proud of her daughter for standing up to Banks as a bully. She said Summer was crying backstage and she didn’t understand what was going on. Then Bayley jumped her and beat Evans down. They did a pull-apart.

Carmella and Dana Brooke were backstage and they’re in the Royal Rumble. As they were doing their interview the camera panned over to Lacey Evans absolutely demolishing Bayley. They did another pull-apart.

They showed a clip of Fire & Desire backstage where they talked about Otis and everything was okay between the two of them.

The match got started and suddenly, Evans and Bayley brawled to the ring and they did another massive pull-apart and the match was called off.

Elias was backstage and Braun Strowman walked up to him and said “let’s go to work.” They’re teaming together next.