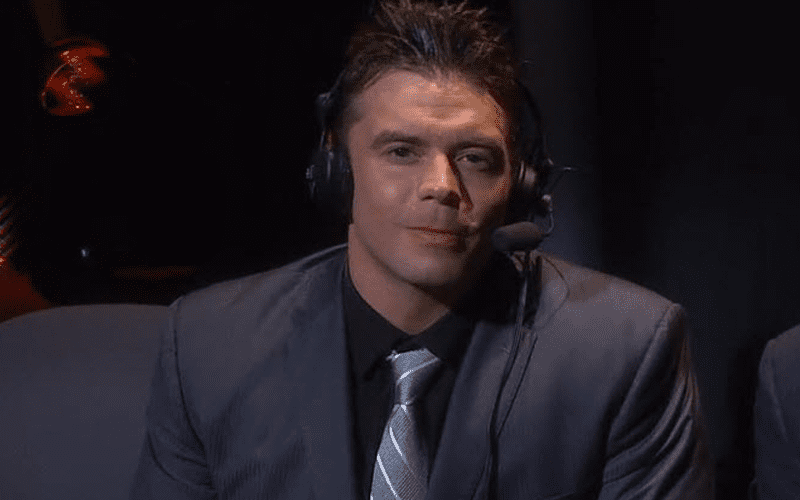 Alex Riley was moved to the commentary table where he spent the remainder of his time with WWE. He is no longer with the company, but he looks back on that time as he learned some valuable lessons.

While speaking to Chris Van Vliet, Riley said that it was a bit heartbreaking to get pulled from the ring. He knew his in-ring career was over when he was moved to commentary so he changed his focus to be the best at that position that he possible could.

“So I think what happens was they were just starting the WWE Network and they needed spaces to fill on the broadcast side. They were coming up with something called the WWE preshow and they always liked the way I spoke.”

“So they gave me a shot at it and I feel very fortunate to have had that shot. It was not — was I a little heartbroken when I came out of the ring? Yeah, of course. I’ve always been an athlete and I’ve always wanted to do athletics — but it’s hard for me to argue or complain about a life that I’ve had an the opportunities that I’ve had and to work on the WWE Network when it was a groundbreaking platform and to be one of the first faces on it, it was great.”

“They did — it was done. They made a decision when I was part of the panel that the wrestling was done and that was that it was one of those things also that I wanted to give it everything that I had with the commentary and that included getting very close with Michael Cole. Learning everything I could going down to the Performance Center in Orlando watching tape — hours and hours of tape — it’s an art, you know it’s a craft 100% it’s not an easy job. You have to think very fast you have to keep our words very tight in soundbites and it takes a while to learn, so I dove into it.”

Alex Riley says that he’s gotten back in the ring a couple of times since leaving WWE, but he hasn’t made a full in-ring return. That might come sooner than later for him as he has a couple of dates in the pipeline meaning the story is far from over for Riley.

you use our quotes credit Ringside News