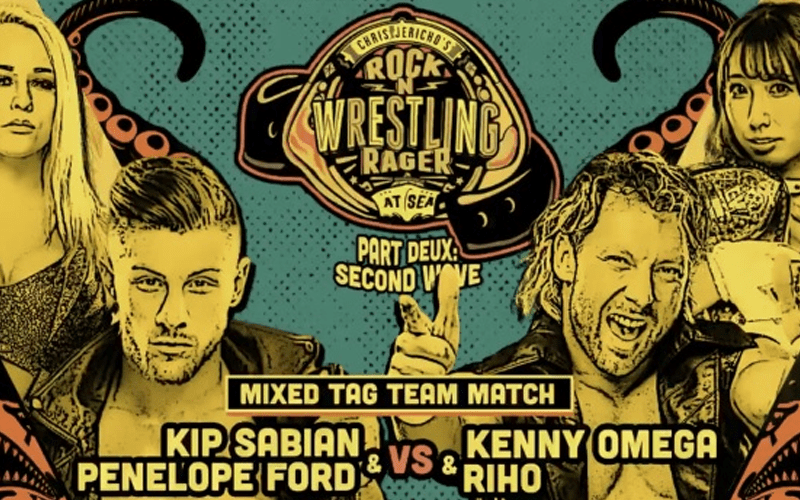 Kenny Omega has his own ideas about how he wants to present the AEW Women’s Division. Last night AEW made history with their first mixed tag team match and The Cleaner was a part of it.

During Wrestling Observer Live Dave Meltzer discussed the main event wrestling match that fans on the Chris Jericho Cruise got to enjoy last night. A lot of fans assume that a mixed tag team match means that intergender wrestling won’t be happening. AEW seems to have their own ideas about mixed tag team matches.

“The main event was really interesting because it was the first intergender match in AEW history. Kenny Omega and Riho against Kip Sabian and Penelope Ford.”

“So, I was thinking that they’re gonna do the thing where the men wrestle the men and the women wrestle the women and they do tag team stuff. It was not that at all. I mean there was a lot of Kenny against Penelope Ford and even more Riho and Kip Sabian.”

Riho was very over on the boat which makes sense. She has yet to experience a time when a segment featuring her on Dynamite lost viewers. Kenny Omega even hit a “very hard and perfect” snap dragon suplex on Ford.

After the match was over Kenny Omega got on the mic. He said that they didn’t know how people would react to the match. It could have been the last mixed tag match in AEW. It appears that it won’t be the final time we see this kind of contest in All Elite Wrestling after the reception it received.

We’ll have to see if AEW introduces mixed tag team matches to their television product any time soon. It seems like Kenny Omega has his own idea about how he wants to do things and it could open the door for intergender competition.