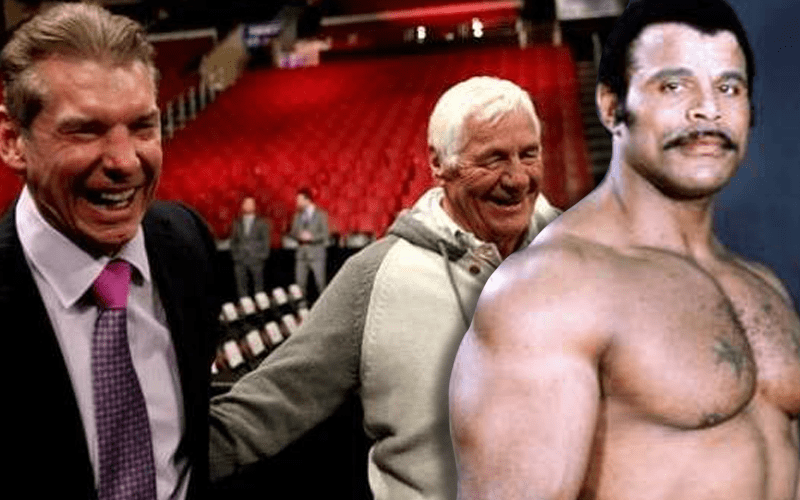 Rocky Johnson was laid to rest, but it wasn’t without controversy.

Devon Nicholson and Superstar Billy Graham are saying that there were some upset people at Rocky Johnson’s funeral. Vince McMahon and Pat Patterson apparently spoke out of turn and Graham said in a now-deleted Facebook post that Patterson called Rocky Johnson”a motherf*cker.”

“out of nowhere Patterson goes into this rant and called Rocky Johnson, laying dead in the casket right below him, a mother F-er and started this vulgar rant about how worthless Rocky was and a bunch of guys had to drag Patterson off the church platform and sit him down.”

“Patterson who just turned 81 must be losing his mind literally. Only in pro wrestling folks, very sad to hear about this and I actually feel a bit ill over this bizarre behavior.”

Devon Nicholson, better known as Hannibal said everything that he has heard so far on his YouTube channel.

“I’ve asked around some other people that were there. I won’t mention their names. Billy Graham said that Vince and Pat were very rude on the podium. This other person who I spoke to said he wasn’t really going to defend what Vince did.”

“Pat apparently said ‘goddamn’ a few times in the church and he said the word ‘sh*t.’ The exact speech of Pat’s that Billy Graham alleged Pat was escorted off the stage. Now I guess we’ll find out more as more people come out that were at the funeral. From the people I spoke to they said that there was some drama.”

“There was frustration that I guess the preacher spoke for more than an hour and was very negative toward professional wrestling. So, Pat and Vince’ attitudes on the stage may have had to do with the preacher who — this is not a quote — but, apparently some people were saying he acting like wrestling was fake and more of a joke.”

“Also, the funeral was supposed to take place at a much smaller place in front of only about one hundred friends and close family members, but it was moved to a massive church and there was a lot of people there.”

We’ll have to see if anyone was recording Vince McMahon and Pat Patterson’s speeches. Apparently they ruffled some feathers. The sermon went long and they weren’t happy about the pastor’s attitude about pro wrestling. That probably didn’t help.

We will keep an eye on this story as more information is made known.