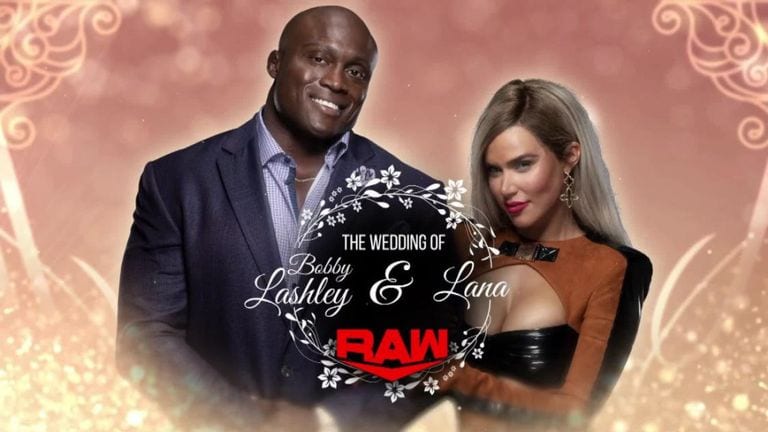 Well WWE has a fittingly dramatic show in store for tonight, as the marquee segment is the lavish wedding between Bobby Lashley and Lana. This Marmite storyline has divided fans for a few months but I personally have enjoyed it; Lana’s incredible overacting is Vickie Guerrero-esque, Lashley is the perfect whipped man, and Rusev is getting over big as a result. It’s fun if nothing else and tonight should be no different.

Elsewhere tonight, in somewhat concerning news, it seems Randy Orton is injured. He was hurt at a house show match this past week, and WWE announced that he would be on Raw tonight to address the situation. Unfortunately that’s rarely good news, so here’s hoping Orton’s injury isn’t career-threatening.

As for the rest of tonight’s card, Aleister Black will go to war with Buddy Murphy once again, and Becky Lynch Tweeted about her contract coming to an end and addressing it on Raw tonight. And that’s really all we know about tonight’s Raw. Andrade beat Rey Mysterio at Madison Square Garden to become the new United States Champion, so we can expect more from him and that hopefully means he and Zelina Vega won’t be splitting ways.

And that’s it for the preview of tonight’s Raw. Let us know what you’re looking forward to via the Ringside News app, or by following us on Instagram and Twitter. Enjoy the show!

The final Monday Night Raw of the decade, live from Hartford, Connecticut, opens with Kevin Owens storming his way to the ring.

He’s @FightOwensFight, and he’s got a LOT on his mind heading into 2020. #RAW pic.twitter.com/nRpsT3MCXO

KO means business tonight and he says he has some fireworks for the new year. And why? Owens directs us to a video on the ‘Tron depicting Seth Rollins’ heel turn, as well as AOP’s beat-down on Samoa Joe last week – who isn’t on commentary tonight. Owens says Seth and the AOP have been running Raw the past few weeks and he knows it better than anyone. KO says he keeps getting beat-up but that’s fine because he’s going to continue calling them out until he takes one of them down.

Owens says what isn’t fine, is that last week Seth and AOP attacked a man he respects more than most; Rey Mysterio. He says they left Rey lying, and that contributed to him losing the US Championship last week at a house show, and we see the footage of Andrade’s win.

Rollins, Akam, and Rezar come out and stand on the stage. Rollins says that what Kevin still fails to see, is that he isn’t the bad guy. He’s ushering in a new era and it has to be done. He says Owens has left him no choice but to enforce his will. Owens wastes no time and runs up the ramp but gets clobbered by AOP. They force him back into the ring and beat him down in the corner as Rollins berates him.

Samoa Joe’s music hits and out comes the bulldozer like a freight train. Joe kicks Akam on the ramp and tosses Rezar into the barricade. The crowd get all riled-up as Rollins motions for Joe to get in the ring and he runs in and attacks him. Joe starts choking Seth but AOP return to beat him down. Owens grabs a chair and starts teeing-off on Akam and Rezar but Seth attacks him. All five men brawl until dozens of security guards come down to separate everyone. They pull Seth from the ring but Owens gets on the top rope and hits a senton onto all of them!

We return to replays of what just went down. Joe and Kevin Owens are sitting backstage. Charly Caruso comes in and asks Joe why he would get involved in this. Joe says he didn’t have a choice; Seth chose for him to be involved. Joe yells that Seth made a choice to never be safe again. He made a choice that Kevin Owens will never be friendless again. Owens gets up and says he’s never known a badder man than Samoa Joe, and he means that in a good way. He wouldn’t have anyone else beside him. Security guards come in and stand behind them. Owens says it seems like every week he’s being escorted from the building, but tonight they’ve accomplished everything they could. So now they have a week to think about what to do next. They turn to leave and Joe flicks his sweat at one of the guards and tells them not to touch him. Owens wishes them a happy new year.

What’s going through this guy’s head?

This highly-anticipated rematch gets underway and Black swings a few kicks, then forces Murphy to the corner. Buddy shoves Black, then takes a headlock. Black shoots him off but gets dropped with a shoulder. Murphy follows-up with a hurricanrana that knocks him from the ring, then considers a suicide dive but turns and sits down like Black as Aleister slid into the ring.

Black swings a kick but Buddy avoids it. Black tosses Murphy from the ring, then does his sit-down to taunt Buddy. Back elbow from Aleister earns a one-count. Snap suplex and float-over pin attempt by Black. Aleister takes a submission but Murphy fights up, only to get dropped with a kick. Black puts Buddy in the corner and delivers a few big punches. Snapmare and a running kick from Black gets another one-count.

Aleister puts Murphy on the apron but gets slammed into the buckles. Buddy climbs up top but Black connects with an incredible step-up knee. Black looks for a superplex but Murphy fights him off and flies over, looks to superkick Black between his legs but gets kicked away. Murphy knocks Black from the top rope to the floor. Both men down as we head to the break.

Back live and both men are on the apron, and Black teep kicks Murphy into the ring post. Murphy crumbles to the floor and Black follows-up with a moonsault from the top rope!

Aleister gets Buddy in the ring and kicks him a few times, hits a knee, then connects with a springboard moonsault for a near-fall. Black grabs Murphy’s leg but gets hit with a few up-kicks, then kicked right through the ropes to the floor. Murphy tries to get up but falls over on his leg. Murphy crawls through the ropes but Black clocks him. Aleister gets on the apron and hits a huge chest kick that drops Murphy.

Black leaps from the ropes but Buddy dodges it, then slams Black into the buckles and pins him with his feet on the top rope…but the referee saw it. Murphy sends Black from the ring, then hits a big tope to the outside. Murphy puts Black in the ring and hits a Meteora for a near-fall. “This is awesome” chant picks-up.

Buddy stomps on Black, then climbs the ropes. Aleister climbs up top with Buddy but gets suplexed off. Murphy hits a sunset flip, rolls through, and hits a powerbomb for a near-fall. Murphy lifts Black up with his foot, mocking him, but Black attacks the leg. Buddy hits a superkick, then both men exchange shots.  Teep from Black sends Murphy into the ropes, and he comes back with a switch knee. Buddy grabs Black but gets caught with a brainbuster and both men are down. The fans give them an ovation.

Black lifts Aleister with his boot and swings for Black Mass but Murphy avoids it, hits the switch knee, then looks for Murphy’s Law but Aleister counters with a roll-up. Murphy kicks-out, both men get up, and Black connects with Black Mass. Alesiter doesn’t go for the cover though, he slowly lifts Buddy with his foot and hits a second Black Mass for the win!

We see Seth Rollins backstage with Akam and Rezar. They’re yelling in Arabic, so Seth asks them to involve him. They say they have Seth covered from all angles. He says management has asked them to leave but without him Raw will be cancelled by the next match. Security shows-up and Seth says they won’t be necessary, because they’re leaving voluntarily.

Lana is sitting backstage, getting her hair done. Erick Rowan walks-up and congratulates her, then asks if she just misplaced his invitation, or if she doesn’t like him. He holds up the bird cage and says they don’t care either way, then screams, and walks off.

Erick Rowan, accompanied with the Gobbledygooker, makes his way to the ring.

The bell rings and Rowan swings a clothesline but, as usual, the jobber ducks it and leaves the ring. Rowan prevents the kid from getting around the ring but, just like last time, the guy goes under the ring and comes out by the cage.

Rowan big boots him, then tosses him into the barricade. Rowan lifts Stevens and slams him face-first into the apron, then throws him into the ring. Rowan checks on the cage before getting in the ring and running into Kip, slamming Kip, then splashing Kip and pins…but stops it himself. Iron Claw Chokeslam wins the match.

Lana is backstage rubbing her entire body in oil and muttering that Rowan is in love with her, just like everyone else. Including herself.