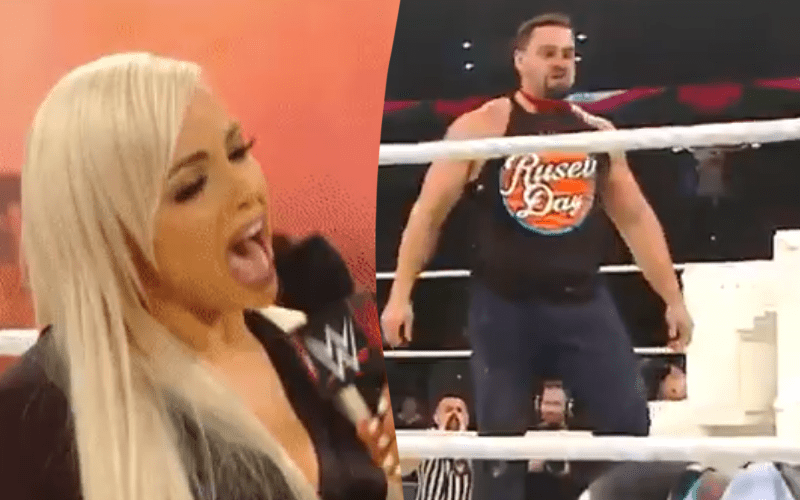 Lana and Bobby Lashley had a whirlwind romance and they got married on the final RAW of the decade.

The ring was decked out in white complete with white microphones and stands. Then the groom made his way to the ring in a sports coat without a shirt on. His sleeves were cut off to show off The All Mighty’s arms.

Then Lana made her way to the ring. The minister got started saying he hoped that they can nurture a love that makes them better versions of themselves. He said marriage is a garden they sow in love and harvest in personal growth. Then he said something about having kids.

Lana said that she doesn’t want to have kids and get fat and be like everyone else. The minister asked Bobby if he was sure he wanted to continue. Bobby said yes.

The crowd started chanting “Rusev Day” and Lana screamed “This is not about Rusev!” Then the minster continued until it was time for them to read their own vows which they wrote themselves.

“Rusev Day” chants continued and Lana screamed to “shut up!” She went to read her vows, but they wouldn’t shut up. She spelled her name and said it’s all about her.

Lana said she’s the greatest woman that’s ever lived. She called everyone pathetic and said the reality is that Bobby Lashley has striven for excellence his entire life and the greatest gift he can give himself is her.

“Rusev Day” chants continued and she chanted “Lana day” back at them before saying it’s all about her. She said everything that Lashley has ever done led him to her. She said she wanted to jump on him and make love to him right there so she jumped on him and they made out.

The minister thanked Lashley for his restraint and then he read his own vows that Lana wrote for him to read. Those vows were about what you would expect them to be as they put Lana over in a big way.

They exchanged rings and then the minister asked if anyone objects to their wedding. Then a man came down saying that he’s Lana’s first husband. Apparently they got married the day she turned 18 and she left him for Rusev.

Lana said he’s still in love with her. Her first husband said that Lana will leave Lashley eventually because that’s what she does. Lashley slammed him down and he rolled out of the ring. Then the minister asked if anyone had an objection again before a woman came out.

The second person objecting to this wedding said that she’s Lashley’s first wife. Lana wasn’t happy at all. The crowd started chanting “Jerry.” Lana took her out quickly.

Finally, Liv Morgan came out and said that the wedding has to stop. She said the love of her life is right there in the ring. She said she wouldn’t have made it through this last year if it wasn’t for their love. She came to WWE as a lost soul and said that she’s in love with someone in the ring. It wasn’t Bobby… it was Lana.

Morgan got in the ring and wanted Lana to tell her that she loves Lashley. Lana started to cry and then she attacked Morgan. They had a massive cat fight and then Rusev jumped out of a cake before the minister could announce them man and wife. Rusev beat Lashley down and destroyed the wedding set.

Rusev landed a Machka Kick on Bobby before Liv Morgan rubbed Lana’s head in her wedding cake. That’s how the final RAW of the decade ended.