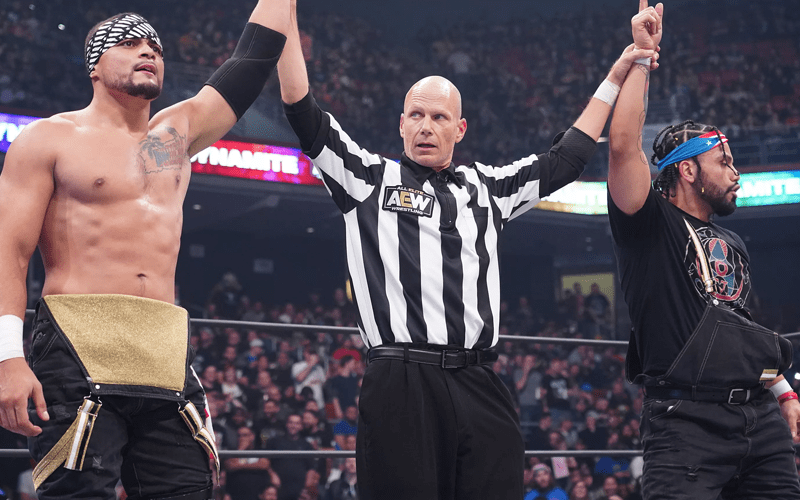 Santana and Ortiz made their big AEW debut at All Out and it popped the Sears Centre in a big way. They were just told no Donald Trump masks.Now they are a focal point on AEW Dynamite as members of Chris Jericho’s Inner Circle.

The team had other offers on the table. They could have always stayed with Impact Wrestling, but it was WWE that posed the biggest threat to Proud n Powerful landing in AEW. Ortiz opened up about this as he spoke to Chris Van Vliet.

“We were about to turn down WWE. We sat down and we don’t wanna burn any bridge. We never wanna burn down any bridge anywhere we go because that’s just not how you do business you should keep every avenue open.”

“So [Santana] had this whole spiel he was like, ‘Okay this is what we’re gonna say so we don’t burn a bridge, alright?’ We go and then we get cut off and they’re like, ‘Listen just really think about your decision.’ We stop. We hang up the phone and we were about to turn them down.”

“We sit there and we’re like damn they’re making this really hard for us, right?”

Santana said that “pretty much they were like write your own ticket and we’ll make it happen.” Obviously, WWE really wanted the former LAX.

Ortiz continued to explain the kind of deal WWE was offering them. It was a good deal to pass on, but now they’re in AEW with Le Champion.

WWE even agreed that Ortiz and Santana could stay in New York if they joined NXT. They also said that being fathers also played a part in things because once they were on the WWE main roster they would almost never be home. In the end, they made a decision to sign with AEW because they wanted to be a part of the change in the wrestling industry.