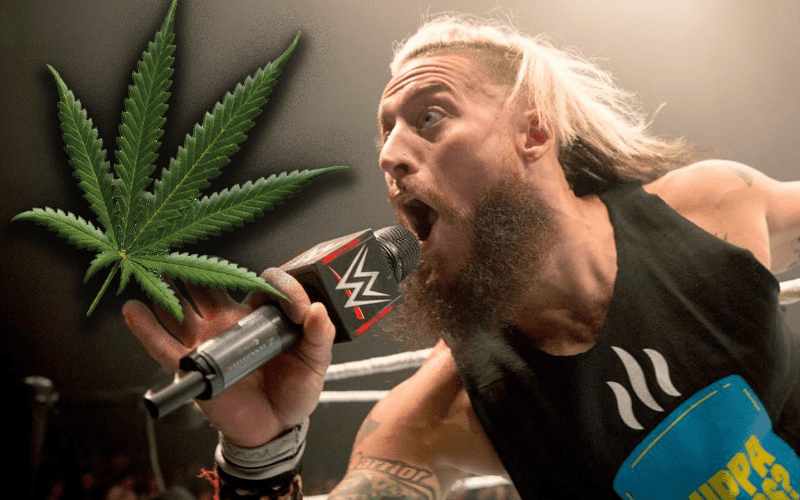 Marijuana is legal in a majority of the United States in some form or fashion. With the increasing number of people who are lobbying for the end of marijuana prohibition WWE doesn’t seem to have much of an issue with their Superstars smoking weed, but it’ll cost them.

While speaking to Talk Is Jericho, Enzo Amore admitted that he’s a pot head, but he didn’t smoke marijuana for about five years when he was making $600 a week working for NXT. The $2,500 fine was just too much for him to pay, but the same isn’t true for WWE main roster Superstars as he revealed that half of them smoke weed.

“I’m a huge pothead and I’m open about it now. Now that I’m out of the company and I can talk about it. For 6 years with the company, I was never in a picture with a beer in my hand, never. I couldn’t smoke pot in the WWE for 5 years. They fine you for it. They fined you for it $2,500 and I was broke. I started off making $600 a week in the WWE for a year, so I was taking out credit cards just to pay my bills. So when I finally looked at my bank account, probably like 6 months into the main roster, I was like, ‘do you know what? I can take a fine right now.’ And I lit up a blunt again for the first time. And, to me, that is my medicine, bro.”

“Marijuana, I don’t know if anyone has ever smoked a joint and then beat his wife. A guy got hammered drunk and something happened, but this is legal. So it helped me. I’d rub the CBD cream all over my body when I was with the WWE. That’ll get you fined $2,500. Yeah. And that’s the thing a lot of people don’t know. Probably half the locker room smokes pot. And why do we do that? You can’t do pills. You can’t do drugs. If you drink, you might end up like Cass. [Imitating Cass] Whoa, whoa, whoa. I don’t want any of that stuff to happen to me.”

Vince McMahon has lit up a joint in front of Donald Trump in the past so obviously The Chairman Of The Board doesn’t see much wrong with marijuana either. The WWE Wellness Policy is pretty cut and dry when it comes to catching drugs in a Superstars’ system.

There is a system of penalties and suspensions that can and have been given if a Superstar pops for anything other than weed. If they have $2,500 to spare then they can pay their weed tax. That seems to be worth it for a lot of WWE Superstars.