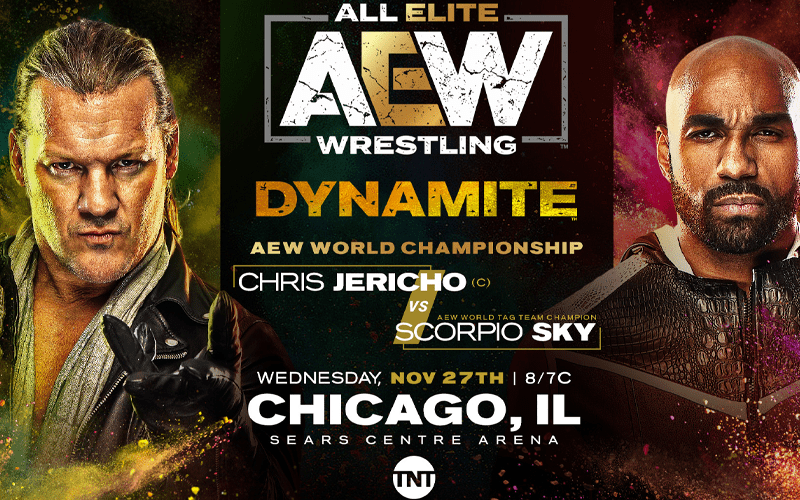 We have a stacked episode of Dynamite tonight, with the AEW Champion, Christ Jericho, putting his title on the line against Scorpio Sky. Two weeks ago Scorpio pinned Le Champion in a tag team match, then last week he tricked into agreeing to the match tonight. This has all the makings of a fantastic showdown, however it seems unlikely we’ll get a clean finish for what could be an exciting new feud. And that’s after Jericho’s big Thanksgiving bash where he finally gets his thank you, which should be a blast.

Elsewhere tonight, ‘Hangman’ Adam Page faces MJF for a diamond ring. Last week the two of them were the last two standing in the Dynamite Dozen battle royale, leading to this showdown tonight. Cody says the AEW ring costs more than that of a Superbowl ring, and DDP will award the winner with it tonight. Truth be told, I don’t care for the ring gimmick, it seems like a really pointless idea instead of just introducing a mid-card title, but hey, MJF is sure to win and gloat about it forever and that’s fine by me.

Also tonight, Cody will have a match and make a statement of some kind, and that’s about all we know. There’s sure to be more developments with The Young Bucks/Santana & Ortiz, and perhaps more about Kenny Omega’s return. So remember to follow along on the Ringside News app, Instagram, and on Twitter. Enjoy the show!

AEW Dynamite opens with Chris Jericho and Soul Train coming to the ring for the big Thanksgiving celebration – not unlike the Festival of Friendship – and flanked by a marching band.

The Chicago fans chant “thank you” but Jericho tells them to shut-up. He says he doesn’t need them messing-up his big event, and he doesn’t want their thank you, it’s AEW he needs to thank him. He mentions that some people in the crowd have cards under their table for 50 cents off a Le Champion t-shirt.

Jericho says that, after months of research and investigation, they found the greatest tasting grapes on the mountains of Nepal and crafted A Little Bit of The Bubbly champagne. You can buy the champagne, for real, at ALittleBitofTheBubbly.com. Jericho and Soul Train drink some of the champagne before Y2J introduces his best friends, The Inner Circle.

Sammy Guevara, Santana & Ortiz come to the ring and Sammy calls Jericho his father figure. He says they have a lot of great stuff planned for Jericho but his is particularly special. He says a picture is worth a thousand words but this one is priceless, and he unveils a cardboard cut-out of the two of them hugging. Jericho loves it. Santana & Ortiz bring a gift basket with flu medicine, a 40oz, flip-flops, and more. Ortiz says the flip-flops can double as a weapon as all Spanish mothers know. Jericho asks where Jake Hager is but they don’t know.

A minute later, Hager comes out from the back with a goat on a leash. Hager says its name is Chris Jerigoat and the fans chant the name. Y2J turns his attention to the giant box in the ring wrapped in his face. Santana & Ortiz lift the box up and reveal Chris Jericho’s father underneath. Jericho hugs his dad, who is wearing a NY Rangers jersey because he used to play for them. His dad says he’s happy to be back in New York and the fans boo. Jericho says they’re in Chicago and his dad says he used to play for the Rangers and they beat the Blackhawks over and over. He says the Blackhawks are wimps. Jericho’s dad says he has gifts for all of The Inner Circle; personalised Rangers jerseys and the fans boo as they take them out of a bag.

Jericho gets down to business with a thank you letter from AEW brass. He opens the letter and brings Justin Roberts into the ring to read the letter. The fans chant “you can’t read”. Jericho asks where he’s from and Roberts says right down the road, went to High School near the arena. Jericho says his high school sucked.

Roberts reads the letter that says AEW wishes Jericho its sincerest gratitude. He has helped make AEW into the most-talked about wrestling league in the world. Chris Jericho exemplifies the kind of leader and wrestler they want on the roster, and they are proud to have him as Le Champion. Jericho says that was a nice letter but he didn’t like the way Roberts read it. He says he thinks he’s better than them because he’s from down the street. Jericho slaps Roberts, then they all gang-up on him. During the beating, three of the marching band run down and attack The Inner Circle and it turns out to be Scorpio Sky, Frankie Kazarian, and Christopher Daniels. They clear the ring and The Inner Circle retreat.

Best Friends make their way to the ring but before they get that far, Lucha Bros attack them from behind! Trent and Chuck reverse whips into the barricade, then Orange Cassidy jumps onto them from the top rope to ringside!

Chuck and Trent send Pentagon and Fenix into the ring to officially start the match. They put the Lucha’s into corners and hit them with several running attacks, then hug.

The Lucha Bros make something of a comeback as Fenix slams Trent, then distracts the referee to allow Pentagon to knock Chuck from the apron with a superkick. Fenix tags Pentagon, who hits a rolling wheelbarrow splash for a two-count.

Back live and Fenix is beating on Trent. He lifts Trent for a powerbomb and Pentagon kicks Trent in the back while tagging in. Pentagon drops Trent, then poses in the ring before looking for underhooks but Trent escapes and tags Chuck.

Chuck drops Pentagon and Fenix runs in but he drops him too. Chuck puts a single leg Boston crab on Pentagon but Fenix kips-up and superkicks him. Chuck knocks Pentagon in the bottom of the corner then monkey flips Fenix into him. Both Lucha’s roll outside and Chuck dives out onto them. Trent looks to do the same but Fenix slides in and superkicks him, then Pentagon comes in and hits a Canadian Destroyer for a near-fall.

Orange Cassidy gets onto the apron taunts Pentagon, allowing Trent to hit a roll-up for a near-fall. Fenix tags in and hits a springboard spin kick to Trent in the corner. Pentagon talks trash to Cassidy but Chuck dives off the apron and onto him. Fenix looks to follow-up but Trent hits a hurricanrana roll-up and scores a pinfall!

We see the Women’s Division Rankins, with Hikaru Shida at number one and Britt Baker at two.

The match opens with Priestly and Sakura running and attacking the babyfaces. Statlander knocks them both from the ring, then hits a moonsault onto Bea from the apron.

Statlander tags Shida, who heads out of the ring and grabs a chair. Shida sets-up a chair at ringside but Sakura sits on it. Shida shoves her off and jumps off of it with a flying knee to Sakura. Bea Priestly then slams Shida into the barricade and takes control as we head to the break.

Back from the break Sakura tries to use her Freddy Mercury mic stand but the referee pulls it away and Shida gets her in a sleeper. Priestley tags herself in and chokes Shida in the corner with her boot. Priestley heads to the top rope and leaps but nobody’s home. Shida hangs Priestley up in the tree of woe, then suplexes Sakura into Priestley in the corner.

Shida tries to make a tag but Priestley attacks her from behind. Shida hits Priestley with an enziguiri but Priestley responds with a German suplex. Priestley eats a swith knee from Shida and both women go down. Statlander and Sakura both tag in. Statlander bridges under a clothesline attempt from Sakura and then hits a lariat of her own.

Statlander hits the Danny Hodge Special and gets a near-fall on Sakura. Statlander goes for a scoop slam but Emi counters with an overdrive. Sakura connects with a body splash in the corner on Statlander, then Priestley dives off the top with a Ghetto Stomp to the back! Sakura hits a butterfly backbraker on Statlander for a near-fall.

Sakura climbs to the top rope and attempts a moonsault but Statlander moves and in comes Shida with a running knee followed by another knee from Statlander. Statlander hits an electric chair drop followed by a scissor’s kick for a near-fall.

Statlander hits a Michinoku Driver but Priestley breaks up the pinfall attempt. Priestley hits a backdrop driver and Sakura hits her with the cane from behind as the referee was distracted. Sakura rolls her up for the pin and holds on for upwards of 10 seconds.

We get a backstage promo from Jon Moxley who likens himself to a wildfire burning across the country. He says he will eventually get everyone, so he’s wondering if there’s anyone willing to take him on. Anyone who has a deathwish and is willing to be a hero or get hurt trying.

Cody makes his entrance for a match against AEW newcomer, Matt Knicks. Cody is wearing his weightlifting belt but has taped wrapped around his ribs.

The bell rings and they lock-up. Cody takes Knicks down but the jobber hits the ribs of Cody.

Nice to see @CodyRhodes getting back on track! #AEWDynamite #AEWonTNT pic.twitter.com/n7H8jIShd0

Cody uppercuts Knicks, then hits a springboard cutter. Cody takes off the weightlifting belt and throws it into the crowd. Cody applies a Figure Four and Knicks taps.

Cody cuts a promo after the match and tells MJF that he wants him to come out and fight. As Cody is staring at the ramp, a hole appears in the ring and out steps The Blade – to which JR fittingly asks, “Who?” – followed by The Butcher. They hit Cody with a suplex/backbreaker move before out steps The Bunny, Allie. That created the equivalent of a wet fart with the Chicago crowd.