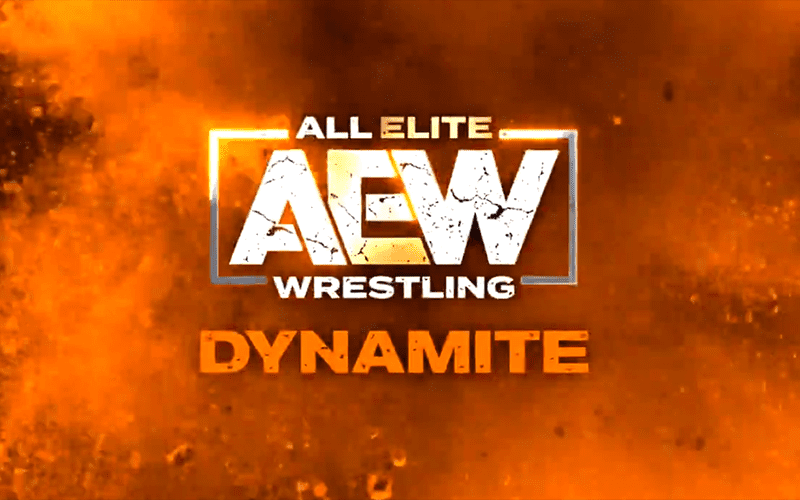 The marquee match announced for tonight is that of Darby Allin Vs. Jon Moxley. Of course, there’s no real story here except that Moxley said nobody in AEW had the balls to face him but Allin accepted the challenge. Regardless this should be a fun, albeit rough, match-up.

That’s the preview for tonight’s episode of Dynamite. Remember to follow along here, on the Ringside News app, or on our Instagram or Twitter. Enjoy the show!

Dynamite opens with the commentators running down tonight’s card. Nick Jackson of The Young Bucks makes his entrance, followed by his opponent.

The match gets underway and both men look sideways at the crowd to get them into it. Jackson takes a headlock but Fenix shoots him off and they exchange shoulder tackles. Fenix connects with a dropkick, then looks to his a 619 to Nick on the apron but the Buck backflips off to the floor to avoid it. Ray goes out after him and they go reversal-for-reversal until they’re back in the ring and staring at each other.

Fenix chops the chest of Jackson, who fires one right back. Nick gets hit with a handspring diving headbutt, followed by a springboard headbutt and a rope-assisted arm-drag. Nick rolls to the outside and Ray runs but Jackson slides back in and hits an enziguiri. Fenix rolls outside and Nick runs off the ropes and dives to the floor but Ray isn’t there. Fenix then hits a forward roll into a cutter on the floor and both men are down.

Fenix gets Jackson back in the ring and heads up top where he hits a killer senton for a near-fall. Fenix looks for the tight-rope kick but Nick avoids it and gets him in the corner for a few big kicks and a bulldog. Running knee-strike from Nick earns a two-count. Ray and Nick both swing for superkicks at the same time, then both head to the middle rope with springboards but Nick gets the better with a hurricanranan for a near-fall.

More fast-paced reversals and superkick after superkick. Both men exchange shots on their feet before Nick gets put on the apron and Ray hits a hurricanrana to the floor. Back in the ring, Fenix counters Nick with a cutter for a near-fall. Again Nick is on the apron and he drags Fenix out with him, where they trade shots until Nick hits a German suplex.

After the match, Fenix and Nick meet in the centre of the ring and the latter looks for a handshake but Ray blows him off and leaves.

The match begins with a lengthy feeling-out process of reversals, until Baker tries to apply the Lockjaw but Shida fights her off as we head to a commercial.

We return to find Baker and Shida on the outside, and Hikaru slams her into the ring post. Shida grabs a chair from under the ring but the referee forces her to not use it. So she sets it up on the floor, runs off of it, and delivers a flying knee to Baker.

Back in the ring, Shida goes to the middle rope but Baker pulls her off by the arm and into the ropes. Baker hits a reverse Russian leg sweep to target the arm. Shida looks for a running knee inn the corner but Baker dodges it. Baker hits Shida with a draping DDT for a near-fall. Shida catches Baker with a switch knee and both women go down.

They get to their feet and exchange shots, with Shida hitting a Judo hip toss, followed by a fireman’s carry backbreaker. Running knee striker from Shida and goes for the pin but Baker counters into Lockjaw but she can’t get it all. Baker releases and hits a swinging neckbreaker for a near-fall. Shida pokes Baker in the eye and looks for an inside cradle but Baker kicks out. Falcon arrow from Shida, then she hits another running knee and wins.

We see a video of a fat guy on a train platform and two people walk past and knock his glasses off. The fat guy gets on the train and examines his glasses, then sees a video on the train inviting him to join The Dark Order, like a cult commercial.

Hangman Page makes his entrance for the Battle Royal.

It’s time for the Dynamite Dozen Battle Royal. The remaining two men in this match will face-off next week for a chance to win a diamond ring.

Pentagon Jr. is the last man to enter the Battle Royal and Ray Fenix is with him on the apron…but it’s actually Christopher Daniels and he distracts Jr. until Kip Sabian tosses him out!

Billy Gunn is in there and he’s the biggest guy by a mile. Sonny Kiss turns her back to Gunn and twerks and we all know Billy loves him some behind. MJF grabs Sonny and throws her out! All the remaining guys in the match pile-up on Gunn until he shrugs them all off like Big Show. Marko Stunt jumps on Billy’s back but the former DX member whips him over the ropes and out.

Jimmy Havoc then runs riot on everyone in the match with a stapler until referees force him out of the match altogether.

We’re back live and Joey Janela was eliminated during the break by Shawn Spears, who isn’t even in the match. Kip Sabian stomps Billy Gunn in the corner, then chops him but Gunn no-sells it. Gunn takes out everyone with right hands but Orange Cassidy kips-up. Cassidy puts his hands in his pockets and delivers some devastating kicks to Billy but MJF returns and tosses him out.

MJF is mocking the disdain of the fans but backs-up into Billy Gunn. MJF shoves Gunn, who responds with a suck-it and hits a Fameasser before tossing MFJ over but he hangs on. Gunn grabs MJF on the apron but out comes Wardlow to distract Gunn. Hangman Page hits a Buckshot Lariat and tosses Gunn out, much to the dismay of the crowd.

Hangman Page runs riot on the remaining members; Kip Sabian, Chuck Taylor, and Jungle Boy. Sabian puts Taylor on the apron and eliminates him with an enziguiri. Sabian then kisses his girlfriend but Jungle Boy takes the opportunity to hit a hurricanrana and eliminate him. Jungle Boy stands on the apron and stares at Page, seemingly the last two and therefore the winners, but MJF pulls out Boy off the apron and he wins with Page.

After the screwy finish, Hangman is held back by referees but Wardlow stands in front of MJF anyway. Next week, Page will face MJF for the diamond ring. Up next though, Le Champion, Chris Jericho has a major announcement.