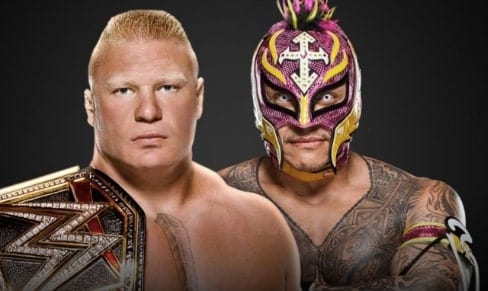 As seen on Sky Bet, the betting odds for Brock Lesnar vs Rey Mysterio at WWE Survivor Series have been released.

While the general theme of the Survivor Series event will be RAW vs SmackDown vs NXT, there will also be a pretty intriguing non-warfare showdown between Brock Lesnar and Rey Mysterio who will be battling it out for the WWE Championship.

These two men have developed a really interesting feud with one another over the course of the last few months, and it’ll be interesting to see whether or not Rey can cause Brock any sort of substantial problems.

In terms of the odds, it’ll come as no surprise to learn that Brock Lesnar is currently the bookmakers’ favourite to walk away with the title at 4/11. Rey Mysterio actually isn’t too distant of an underdog, either, at 2/1.

Rey has only held the WWE Championship for around an hour or so throughout the course of his career and while it seems unlikely for him to do so again, it’d be such a great story if he was able to avenge the beatings he and his son have taken from The Beast Incarnate.

There’s a long road ahead before they can even think about winning the belt, but there are certainly a lot of different ways this match could go. We either think Lesnar will utterly dismantle Rey, or alternatively, Cain Velasquez will return and cost Brock the match. Whatever the case may be, we just want to see an interesting bout between the two.