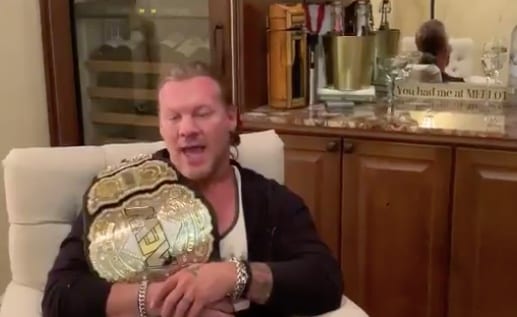 Some may love him and some may hate him, but one thing that cannot be denied is how much of an impact Chris Jericho has had on the continued growth of All Elite Wrestling.

The former WWE and WCW star has been making a home for himself in the new start-up promotion, and up to this point, he’s done a pretty solid job. He became the first ever AEW World Champion, and he managed to successfully defend the belt against Cody Rhodes at AEW Full Gear.

Now, as we look ahead to tomorrow night’s edition of Dynamite, Jericho has the chance to become a double champ – or, as he would call it, Le Double Champion.

Jericho will be teaming up with Sammy Guevara in order to take on SCU, with the AEW Tag Team Championships being up for grabs. Jericho is no stranger to tag team wrestling and he’s certainly not a stranger to winning tag titles, whereas Guevara is just starting to get into his groove after joining the Inner Circle.

There are a lot of different directions in which this can go but whatever happens, it certainly feels like AEW is trending in the right direction – and with that, we don’t believe Jericho is in any danger of being knocked off the top of his perch any time soon.

SCU are in with a good chance of retaining the titles but given how short notice this match was, there could be a surprise on the cards here.