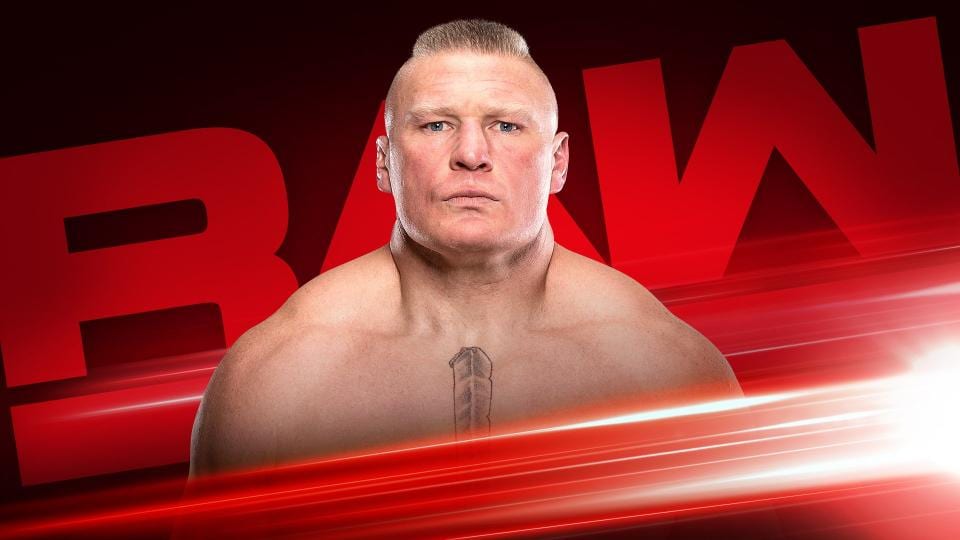 We’re less than a week away from WWE Crown Jewel and, as per usual, the fallout from the show has been sizeable. All that jazz aside, WWE did a fantastic job of covering its ass with the NXT invasion storyline on SmackDown this past Friday night. Tonight the invasion storyline is set to continue the build towards Survivor Series, later this month. That alone should make tonight’s Raw a must-watch show.

Elsewhere tonight, the WWE Champion, the Beast, Brock Lesnar, comes to Raw in search of Rey Mysterio. Brock quit SmackDown on Friday night – perfect timing, what with Raw lacking a marquee Champion – and Heyman says he wants to annihilate Rey Mysterio for attacking him after Crown Jewel. It’s always fun to see The Beast in hunt mode and tonight should be no different.

There isn’t much else known about tonight’s Raw, but we can expect The O.C. to boast about their big successes in Saudi Arabia, Becky Lynch to find a new challenger in Asuka or Kairi Sane, Braun Strowman to murder someone to regain his momentum, and the drama between Lashley/Lana/Rusev to continue.

WWE Raw opens in the parking lot, with three black SUV’s pulling up. Out steps Triple H of the first car, then he walks to the second and tells whoever is inside to wait. The fans are already chanting “NXT”! Triple H walks into the arena as the intro plays.

Paul Heyman and the WWE Champion, Brock Lesnar, make their way to the ring and The Beast means business. Heyman introduces himself and his client,  then reiterates that Brock is here to find Rey Mysterio. Heyman mentions that, following the 2019 Draft, Raw traded Alexa Bliss and Nikki Cross to SmackDown, which gave the red brand future Draft considerations. So, as of now, Brock Lesnar’s contract has been given to Raw. But that does not mean Seth Rollins can go to SmackDown, nor can Roman Reigns come to Raw, it means that Brock is different.

Heyman asks, “does that mean Brock Lesnar is better than you?” Yes it does. He also says Brock is better than all the “bitches” in the back, who think they’re tough guys. Heyman says that somebody here tonight knows where Rey Mysterio is, and Brock will find out, even if he has to slap every man in the crowd. He then mocks the fans from Long Island and says they’re dumb enough to think they could slap Brock back. He gets back to Mysterio and says someone will give-up Rey, because otherwise Brock is going to turn the arena upside down in order to find him. Heyman says that tonight is the funeral for Rey Mysterio’s career at the hands of Brock Lesnar, and then they leave.

We head backstage and see Brock walking around, screaming for Rey. He grabs a nearby stage hand and slams him on a table, screaming at him if he knows where Rey is. The guy doesn’t answer so Lesnar just tosses him and walks off.

We’re back live and Brock is terrorising more people backstage, and this time the guy says he thinks Rey is in a black car over the way. Brock walks over and rips the door off the car and yanks the guy out by the leg. It isn’t Rey, so Brock angrily breaks the car door and stomps off.

The Kabuki Warriors are in the ring for tag team action. They’re joined by Charlotte Flair, then we’re treated to a video highlighting the women’s match in Saudi Arabia. Natalya comes out next, as Charlotte’s partner.

The match begins with Natalya and Kairi Sane. They lock-up and Natalya takes an wrist-lock. Sane reverses it but Natalya flips out and hits a spinning powerslam for a one-count.

Sane tags Asuka and she locks-up with Nattie, who takes her down with a kneebar. Asuka reverses into an ankle lock but Natalya rolls out. Nataya kicks Asuka and takes a front facelock but Charlotte tags herself in. The Queen slams Asuka by the head, then looks for an exploder suplex but Sane comes in. Nattie comes in and she and Flair hit stereo suplexes on the tag Champions. Asuka and Sane roll from the ring as we take a break.

We’re back and Asuka has Natalya in a headlock. Nattie fights up and drops Asuka with a shoulder tackle. Natalya grabs the legs but Asuka kicks her off and rolls from the ring. Natalya runs out and around to Asuka but gets dropped with a kick. Asuka puts Natalya back inside and applies an armlock.

Asuka tags Sane, and they hit a double team kicking combination. Sane takes applies a submission to Natalya and taunts Flair. Nattie throws Sane off but gets clocked with a dropkick. Flair and Sane start scrapping, allowing Natalya to hit Sane and make the tag.

Charlotte comes in with chops to Sane and a big boot to Asuka on the apron. Flair hits a fallaway slam and kips-up, followed by Natural Selection but Asuka breaks-up the pin attempt. Charlotte goes out after Asuka and drops her with a forearm. Flair rolls Asuka inside and hits a big knee, then drags Asuka and Sane together towards the corner. Charlotte scales the ropes and hits a moonsault to both women but Sane kicks out.

We return as Flair is literally millimetres away from a tag and stays there until Sane runs in and stops her. Kairi beats Flair down in the corner but then gets dropped with a big boot. Flair crawls to Natalya again and this time she makes the tag.

Just as soon as the last match ends, Brock Lesnar and Paul Heyman come out and make their way to the announce table. Heyman has a microphone and he asks the announcers where Rey Mysterio is. He asks The King where Rey is and says if he doesn’t answer, he will release The Beast. And this time if The King dies, nobody will resuscitate him. Dio Maddin then gets up and in the face of Lesnar, who knees him, delivers a few forearms, then picks him up and hits an F5 through the announce table!

Lesnar and Heyman take the title and are about to walk-off when Rey Mysterio comes running out with a steel pipe and starts beating Lesnar. He beats him in the legs and back, then grabs the WWE Championship and hits Brock in the head with it, sending him rolling down the ramp!

We see a video from during the commercial, in which Brock Lesnar tried to get to his feet and make his way up the ramp but could barely walk.

Rey Mysterio cuts a promo backstage, in which he says Brock tried to take everything from him. But an eye for an eye and he’s fighting fire with fire. He plans to take what is most important to Brock: the WWE Championship. He asks if Brock will be man enough to come for him at Survivor Series.

Murphy pulls Alexander out of the ring and rams him into the barricade. Buddy chops the chest of Alexander, then looks to do it again up against the ring post but misses and hits the post! Alexander hits Murphy and gets him back in the ring, only for Murphy to pull the apron inside, distracting the referee and allowing him to hit a cheap shot. Murphy tosses Cedric into the ring post shoulder-first, then takes him down with a submission.

Alexander fights to his feet but Murphy slams him down, shoulder-first. Buddy continues to target the arm, yanking it and grinding it down. Cedric fights up and chops the chest of Buddy, then delivers a spinning back elbow. Handspring kick from Alexander that knocks Murphy to the outside, followed by a suicide dive, then a tope.

Alexander rolls Buddy back inside and hits a rope-assisted STO for a near-fall. Cedric takes to the apron and looks for a springboard but gets caught by Buddy, who looks for Murphy’s Law but can’t land it. Cedric hits a Michonoku Driver for a near-fall. Cedric looks for the handspring kick again but this time gets cracked in mid-air with a leaping knee. Murphy’s Law is the end for Alexander.

We see a replay from the start of Raw, when Triple H arrived with two SUV’s, followed by highlights of NXT invading SmackDown.

Seth Rollins is shown walking backstage, he’ll be out to discuss Crown Jewel, next!