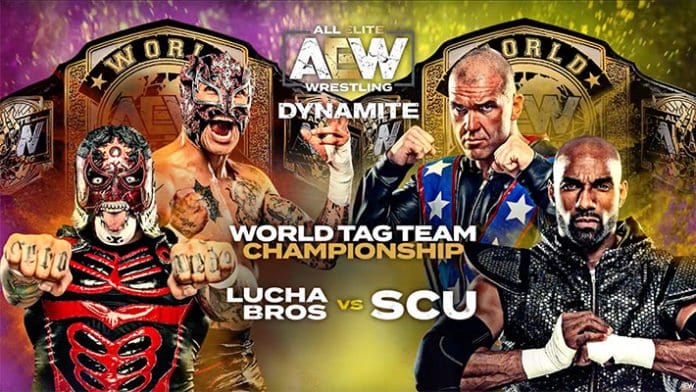 We’re little over a week away from AEW’s first PPV since Dynamite debuted, Full Gear on November 9th, but tonight is all about tag team action. The main event of Dynamite will see SCU face Lucha Bros with the winners becoming the first-ever AEW Tag Team Champions! If the rest of the tag tournament is anything to go by, we can expect mad, high-octane action with zero rules and zero selling. If that’s your thing, then get excited!

Keeping on the tag team train for now, we’re also going to see Kenny Omega team with The Young Bucks to take-on Kip Sabian and The Hybrid 2. This will be our first real look at Sabian, Jack Evans, and Angelico, and it should be another fun tag match.

As for the build to Full Gear though, we have a big contract signing tonight between Chris Jericho and Cody. Things got fiery last week when Cody chased and beat Jericho through the concourse, and tonight should be no different. One of Jericho’s cronies, Sammy Guevara, will be in action however, against Adam Page.

And that’s the preview for tonight’s show. Oddly enough, AEW is teasing a Rick and Morty crossover for tonight’s Halloween-themed episode, so that should be fun. Remember to follow along on the Ringside News app, as well as on Instagram and Twitter. Enjoy the show!

Dynamite kicks-off with Tony Schiavone standing in front of a private jet. Cody and Dustin Rhodes step out of the plane and shake the hand of Tony, before hugging each other. Dustin leaves and Tony walks off with Cody. Tony asks Cody about the upcoming match with Jericho and he says it’s just another match, to which Tony says it isn’t. They step into a car and that’s that.

We see footage from the end of AEW Dynamite last week when Jon Moxley and PAC fought to a time-limit draw last week, then the drama from afterwards when PAC attacked Moxley until Kenny Omega made the save. PAC was then attacked by Hangman Page, who challenged him to a match at Full Gear. We then see Moxley walking backstage, pissed off and throwing things, and he marches into Tony Khan’s office. Khan informs Moxley that he can’t have a sanctioned match against Kenny Omega at Full Gear because it would be too violent, so it will have to be a Lights Out match. Moxley is furious because it won’t count towards his win/loss record. He says he had the balls to go after AEW’s top guy and now he learns that it won’t even matter. He says what happens to Omega will be on Tony’s head.

We go live to the arena and the announcers run down the card for tonight’s show. Sammy Guevara makes his way to the ring for the biggest match of his career. So far, a much better start to Dynamite with some actual story building towards the PPV.

The match gets underway and they lock-up with Page forcing Guevara to the ropes. Page then chops the chest of Guevara, before whipping him into the ropes and connecting with a big boot. Hangman hits a float-over suplex for a two-count. Guevara and Page exchange reversals until Sammy knocks the Hangman down with a dropkick and poses.

Guevara hits a snap suplex for a one-count. Chops from Sammy in the corner but then Page whips him to the opposite corner and slaps him in the face. Guevara kicks Hangman back and leaps from the middle rope but gets caught with a fallaway slam. Page kips-up, then clotheslines Guevara to the outside.

Page leaves the ring and tosses Sammy back in, but then Guevara slides right back out as Hangman is on the apron, and yanks his foot down so he lands on the hard side of the ring. Guevara fires Adam into the barricade, then back into the ring. Hangman fires back with a chop but Guevara punches him down. Guevara puts Hangman on his shoulders and squats before hitting a Samoan drop for a two-count.

Sammy heads to the top rope but simply climbs down and slaps Hangman in the face. While Guevara is posing for the booing fans, Hangman gets up and slaps him back. They exchange shots until Page drops Guevara with a big lariat. They get to their feet and Hangman connects with a big boot, followed by a back suplex. Guevara rolls to the apron and Page joins him. He looks for the Deadeye on the apron but Guevara counters him and kicks him back. Guevara runs but gets hit with a sidewalk slam on the apron!

Back inside the ring, Hangman hits a pop-up powerbomb for a near-fall. Page lifts Sammy and tosses him over the ropes to the floor, then climbs to the top rope and hits a moonsault to Guevara on the floor! Page puts him back in the ring and looks for the Buckshot but Sammy rolls backwards to get out of range. Page comes into the ring and ducks a spinning back fist but eats a switch knee before delivering a discus elbow of his own. Page ducks a clothesline from Guevara before hitting the Buckshot Lariat for the win!

After the match, Page grabs a microphone and says it isn’t a secret that things haven’t been going his way lately, but tonight felt good. At Full Gear, he’s planning on doing some “real cowboy $hit” and take PAC’s head off. The fans chant “cowboy $hit”, and J.R says “that’s a shirt”. Page will meet PAC at AEW Full Gear on Saturday, November 9th.

The bell rings the both women circle the ring before locking-up. Shanna takes control of the wrist and hits Shida with two arm drags, followed by a spin kick and a flipping neckbreaker for a one-count. Shanna tosses Shida to the outside, then looks for a dive but Hikaru jumps up with a knee.

Both women on the outside and Shida gets a chair from under the ring. She sets the chair up at ringside and runs off it to deliver a knee to Shanna. Shida then runs around high-fiving the fans before getting Shanna back in the ring – while the announcers make excuses for why the referee didn’t count.

Shida connects with a backbreaker for a one-count, then delivers forearms to the back. Hikaru hits a running knee in the corner for a two-count. Shanna fights up with a few punches but gets dropped with knees. Shanna reverses Shida with an inside cradle for a near-fall, which just seemes to anger Shida, who hits her with a flurry of stiff forearms. Shida looks for a brainbuster but Shanna sticks to the mat. Shida hits a big right hand and that seems to piss-off Shanna as we head to the break.

We come back to see Hikaru and Shanna jockeying on the middle rope. Shanna drops Shida with a headbutt into the tree of woe, then connects with a double foot stomp for a near-fall.

Shanna slaps the back of Shida’s head repeatedly as she lifts her up. Shida counters Shanna to hit a sit-out neckbreaker. Shida hits an outside-in suplex to Shanna from the apron for a two-count. Shanna rolls-up Shida for a very close near-fall, then hits the ropes but Shida connects with a running knee, followed by a Falcon Arrow for a near-fall. Shida hits a running knee strike for the win.

We see a clip from last week when Brandi Rhodes attacked Jamie Hayter. Next we get a video of Brandi putting on make-up and a veil of sorts, then her screaming with clips of Awesome Kong in between.

Chris Van Vliet is on stage in the arena and he introduces Ricky Morton and Robert Gibson, the Rock ‘N’ Roll Express. The two legends come onto the stage in West Virginia, carrying the AEW Tag Team Championships and they say it’s great to be back in the arena. They defeated the Andersons in this very building some 30 years ago. Out of nowhere, Santana and Ortiz come out and attack Ricky and Robert! They beat them down with a sock with something in it, like in prison. Ortiz lifts the Tag Team Championships and throw them aside. They lift Ricky Morton on the stage and powerbomb him through the stage! The Young Bucks comes running out a minute too late and Santana and Ortiz leave. Matt and Nick check on Robert Gibson and try to get some help for Ricky Morton.

We’re back in the car with Tony Schiavone and Cody. Tony says they’re heading to the arena to sign this contract and it reminds him of heading to Tuscon with Dusty to interview Willie Nelson. He goes into Dusty’s hotel room, and Rhodes is butt naked. He tells Dusty that Willie is already by the pool, to which Dusty says “good, the star always arrives last”. Tony says that’s his plan for tonight, Cody making Jericho wait. Cody laughs and says he’s not that nervous about this match. His mother is going to be there, his brother is walking him to the ring, and he knows Chris is better than ever, but this is his moment. Tony says he sees the emotion in Cody with his family, and that he should use that emotion and let it drive him.

We’re getting a six-man tag team match and out come Chuck Taylor, Trent, and Orange Cassidy, dressed like Rick & Morty. The fans are wearing Rick & Morty masks and the voice actors announce them.

The match kicks-off with Taylor and John Silver. Taylor drops him with a shoulder before tagging Trent. They hit a double-team shoulder and Trent’s wig falls off, but he puts it back on. Silver hits Trent and the wig comes off again, then Reynolds and Marshall run in and knock Cassidy and Taylor from the apron.

Marshall and Reynolds hit Trent with running forearms in the corner, but Trent counters one from Silver before tagging Chuck. Taylor takes out Marshall and Reynolds, then tags Trent, who drops Silver with a big running knee. Half and half combination from Trent and Chuck, who then put their wigs back on and are about to hug but Marshall attacks them.

Orange Cassidy reappears, wearing his normal gear, and he kicks Marshall in the legs. Cassidy ducks a clothesline and dropkicks Marshall from the ring, then kips-up and the referee puts his sunglasses back on. Chuck and Trent then do a triple hug with Cassidy. Orange leaps through the ropes, hands in pockets, onto Marshall and Reynolds, before Trent and Chuck hit their finish for the win!