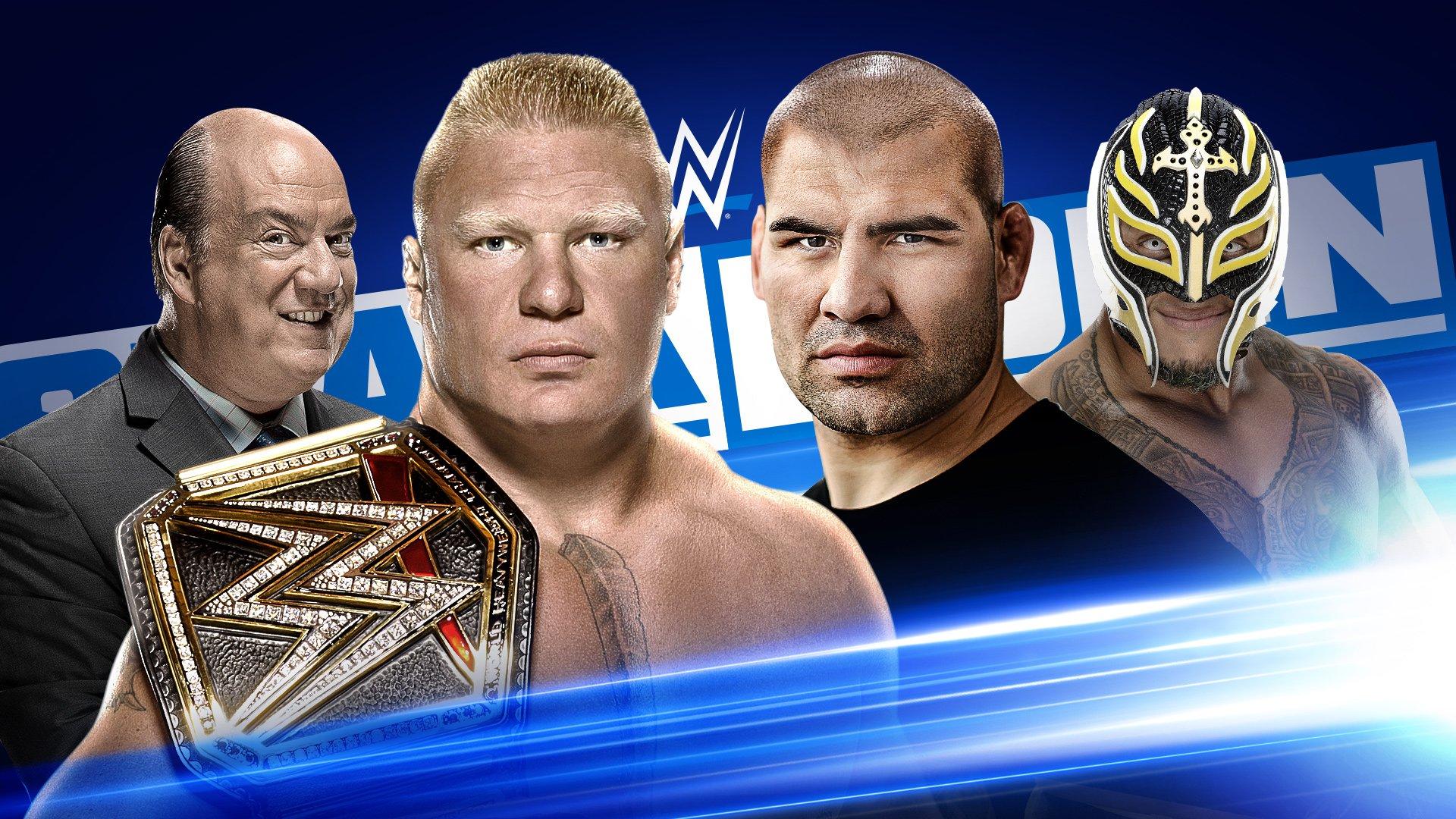 SmackDown is on FS1 this week because of the World Series. They are bringing a big show to gain all the interest they can.

Brock Lesnar and Cain Velasquez are set to have a face to face confrontation. Let’s see what happens before those two collide at Crown Jewel.

Miz TV will see Hulk Hogan and Ric Flair have a meeting before Crown Jewel as well.

The New Day will battle Dolph Ziggler and Robert Roode. Those two teams will be a part of the largest Tag Team Turmoil match in Saudi Arabia as well.

Nikki Cross is also set to square off against Mandy Rose. You can check out the complete bullet point list below.

The ring was done up for Miz TV. Hulk Hogan, Ric Flair, and their teams were already in the ring. Jimmy Hart was there too.

He introduced Flair and Hogan. Miz only mentioned Rusev, Randy Orton, Bobby Lashley, Drew McIntyre, and Ricochet since they’re on RAW. He introduced everyone on the teams next. Corbin got the loudest reaction from the crowd by far.

Hogan said he put together “the greatest Hulkamania team” and asked whatcha gonna do when Team Hogan destroys you? Then Ric Flair got mouthy right back. He said their “match” at Crown Jewel will be just like them going at it one more time. Then Hogan told him to check the history books because Flair has never defeated Hogan. There’s no way he can beat Team Hogan “when I’ve got guys like Shorty G, brother!”

Then he said that Team Flair looks like the perfect bone for the Big Dog to take a bite out of, brother.

Zayn made fun of Shorty G and then G said he’s proud to be who he is. Oh, and he’s got new ring attire with a big G on it. Ali said that Zayn doesn’t compete anymore because he’s just a mouthpiece “which is really ironic considering how bad his breath stinks.”

Corbin reminded everyone that they’re in the presence of a kind and “Crown Jewel was named in my honor.” Then he said Roman will let everyone down, but this is his kingdom now. “These people bow to him and so will Reigns. They don’t need a hero, they need a ruler and I will rule with an iron fist.”‘

So they had a six man tag match which was Hogan’s idea. Zayn told Hogan to “take it easy brother” and said they will take the offer under advisement.

Hogan then proposed that the main event tonight be a six man tag match with Zayn involved. Then Sami accepted for everyone, but they didn’t read the fine print, because Zayn “tweaked his neck” so he’s on the “do not touch” list, but he’s got someone who would love to be in this match so he called out Cesaro.

Cesaro rushed the ring and Reigns landed the first punch. Then all hell broke loose around the ring. Shorty G hit a somersault dive off the apron on some people and then Ali hit a suicide dive. The heels ran away as Hulk Hogan’s music played.

Then they showed Big E and Kofi walking with Woods on an iPad. Their match is next.

Dolph and Kofi started off this match. After sole acrobatics, Kofi hit a leaping back elbow and climbed up top, but Roode hit him and crotched him on the turnbuckle. Then Ziggler nailed a superkick to Kofi while he sat there on the top turnbuckle.

Big E was the legal man when we came back from commercial and he gained the advantage for his team. Then Kofi took a tag and he hit a dive on the outside to Ziggler. Roode hit a spinebuster on Big E and then Ziggler got a very quick roll-up pin on Kofi.

It looks like WWE is building Lacey Evans with some enhancement talent. Before the match started, she cut a promo saying that she doesn’t want to compete against “this nasty thing.” She said that she’s leaving and said the fans don’t deserve to see her.

The bell sounded and Evans started to leave. The referee got to 9 and then Evans ran in, hit a Women’s Right and won. That was actually well done.

Michael Cole interviewed Nikki Cross backstage on a short circuit feed. She said that she’s happy to take Bayley’s title. Then she hyped her match with Mandy Rose by calling her beautiful. But this isn’t a beauty pageant. This is Friday Night SmackDown. Zero crowd reaction.

Corey Graves introduced it by saying that not everyone made it out unscathed.

The episode was Ramblin Rabbit’s funeral. It was sad. Bray was sad. Huskus the Pig Boy was sad. Mercy said he was a good dinner. Bray said he wanted an open casket. Then he took the bloody rabbit puppet out of this wooden box.

“See you at Crown Jewel!”

Before the match, Gulak introduced himself and then he wanted to show a Power Point presentation. This presentation was 345 slides long about how Braun is going to lose to Tyson Fury. They only needed one slide before Kalisto kicked Gulak.

Then Gulak dropped Kalisto on the back of his neck before picking him up.

Suddenly, Braun Strowman came down. Kalisto got his finisher and won.

He cut a promo saying at least Gulak deserves to be in the ring unlike Fury. He’s gonna get those hands at Crown Jewel.