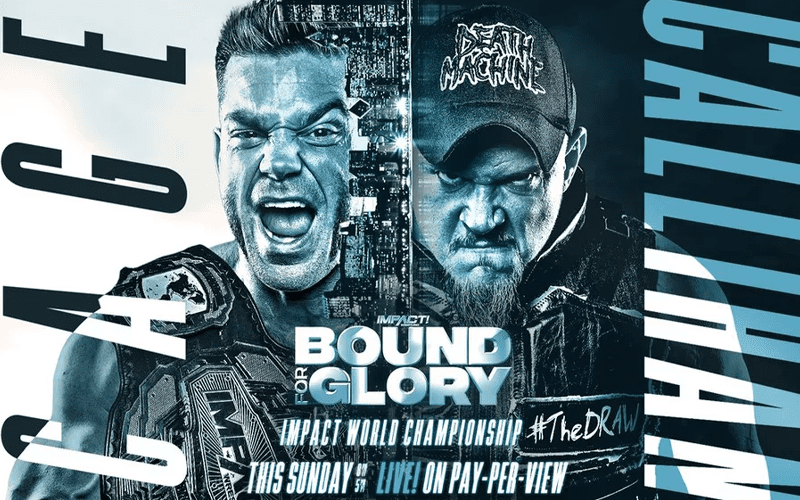 Welcome to Ringside News’ live results for Impact Wrestling’s Bound For Glory pay-per-view. We will kick everything off at 8:00 PM EST.

Four titles are on the line tonight and one of those matches will be determined in a ladder match. Those are always fun and sine Ace Romero recently signed with the company he’s in the match too.

Tonight will also see Ken Shamrock’s return to the ring as he faces Moose. Those two could surprise us and they’ve been hinting at Shamrock taking some unprotected chair shots to recreate a classic spot with The Rock.

You can check out the rest of the card below:

Joey Ryan was a big surprise in this match, but nobody wanted to touch it. Then everyone touched it in a big line and five people took back bumps thanks to his strong dong.

Havoc came in next and chokeslammed Ryan. Then Rosemary came in while Joey poured baby oil on his crotch. That didn’t end too well for him. Then Fulton came in and took both of them out.

Swoggle was another big surprise and then Tommy Dreamer came out too.

Kylie Rae was another huge surprise in this match. She was sporting some new ring attire too. Kylie was all smiles and gave out Superkicks all over before hitting a cannonball and the she did her signature pose. Then Fulton choked her out in the corner a bit.

It all came down to Eddie Edward and Shera, but Fulton took out Edwards first with a powerbomb against the apron.

Eddie Edwards ended up coming through with the win in this one.

Taya is the longest reigning Knockouts champion in history at 287 days. Taya got the early advantage with some strikes, but Tenille landed a kick and a suplex for a two count.

They continued and a neckbreaker from Tenille sent Taya to the floor, but she avoided a top turnbuckle dive from Dashwood by moving out of the way. Then Taya caught Tenille’s leg on a kick and sent her into the apron.

Taya hit a backstabber for a two count and then she latched on a submission hold. The entire time Don Callis kept throwing shade at John Morrison. He called the stuffed dog that Johnny Bravo had “Hennigan” and then he said that Taya is by far the most talented wrestler in her family.

Tenille sidestepped Taya in the corner and latched on a tarantella for five seconds. Then Dashwood hit a cross body dive for a two count. Tenille landed more punches, but Taya sent Tenille into the turnbuckle and hit running knees.

Dashwood hit a sit-down powerbomb from the top rope for a two count next. She laid in some elbows, but Taya hit a blue thunder bomb for another two count.

They started fighting on the apron and then Taya blocked Dashwood from hitting a move. Then Taya hit a nasty looking package piledriver on the apron.

Tenille got back in at the referee’s 9 count and immediately had to kick out of a pinfall. Taya tried to hit another move off the top and then Tenille came back with two crossbody splashed and a spotlight running knee strike. Bravo pulled Taya under the ropes to break up the pinfall, but he was then ejected from ringside.

Bravo threw a steel chain into the ring and Taya wrapped it around her fist. She missed a swing and then Tenille got the chain and threw it. Then Taya hit her finisher and got the win.