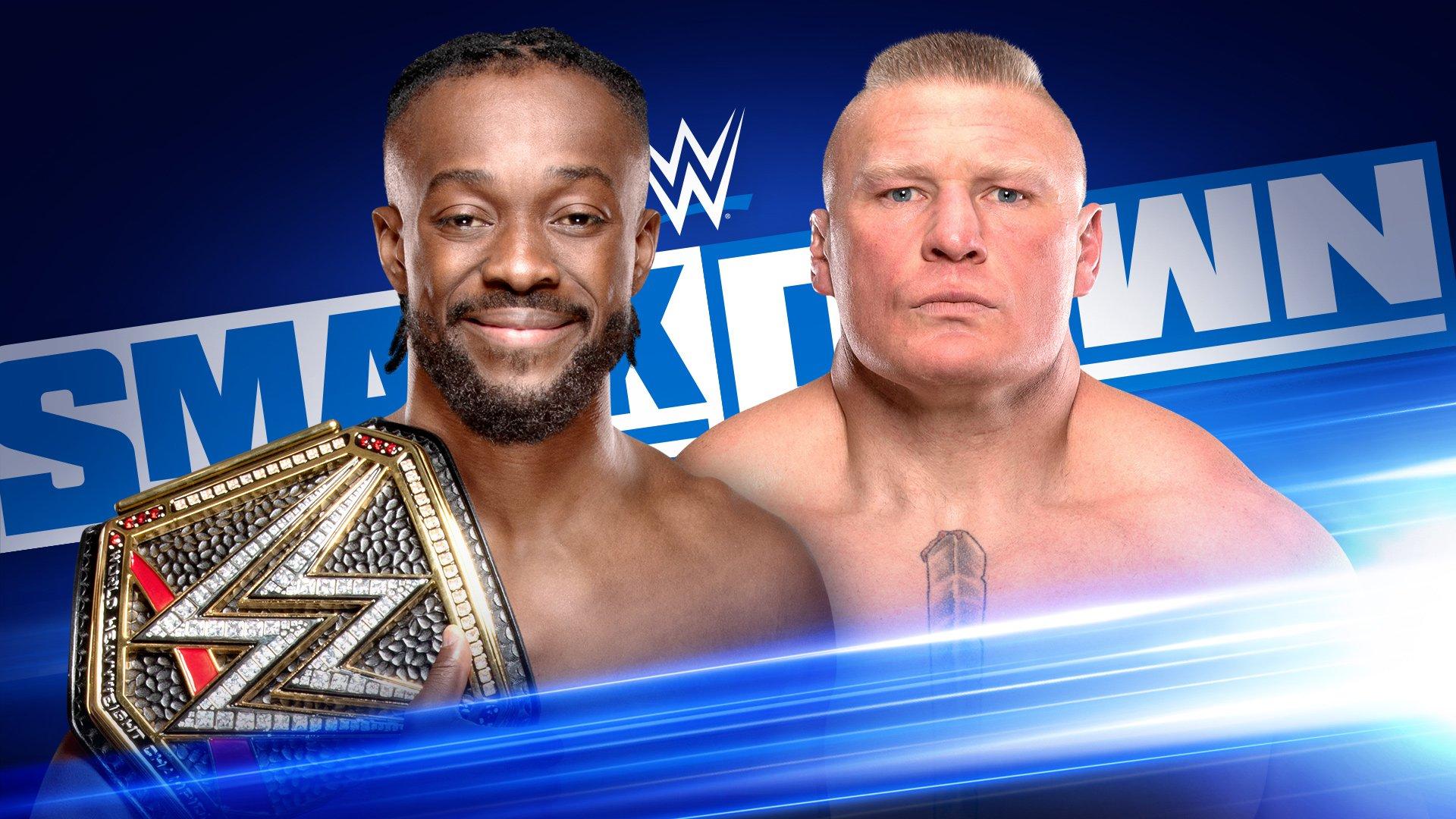 The big Fox debut is finally here and WWE booked a huge show with all the bells and whistles. This is also the go-home show before Hell In A Cell on Sunday. Let’s not forget about that.

Brock Lesnar will face Kofi Kingston for the WWE Title. Let’s just see if the Beast Incarnate pulls it off and leads the blue brand into Fox.

WWE’s Four Horsewomen will be in action in a tag team match. Charlotte Flair and Becky Lynch will team up to face Sasha Banks and Bayley.

We also have a loser leaves town ladder match between Kevin Owens and Shane McMahon. That one might be very interesting.

Roman Reigns will also be in action as he takes on Erick Rowan. Let’s not forget that WWE also needs to book some matches for Hell In A Cell since they only have THREE booked right now.

This will be Michael Cole, Corey Graves, and Renee Young’s big move to the blue brand.

Who comes out first? Vince McMahon and Stephanie McMahon. The crowd sings his theme song at him and he loves it.

The set does look very cool. They welcomed us to Fox and Friday Night SmackDown. Then they played the new intro video and it’s sick and included Bray Wyatt, The Miz, Seth Rollins, The Undertaker, Sasha Banks, and Brock Lesnar. All RAW Superstars. Interesting.

Becky Lynch came out and everyone popped. She raised the RAW Women’s Title high to open SmackDown Live on Fox. Yes, please read into the irony.

She said it feels good to be kicking off the first episode of Friday Night SmackDown because the blue brand is where she changed the game. This is true. She thanked the fans and said she’ll repay them by kicking someone’s ass. Then King Corbin came out because it’s Fox.

Corbin got a ton of heat for calling himself the King and he said that he should be starting the show off… every one knows that. He asked her if she still believed that she’s The Man. She told him to take one more step into the ring and find out.

Then The Rock came out. HUGE POP. INSANE.

The Rock took off his jacket and covered up the camera just for fun. Then he approached the ring and got in with The Man and The King.

He said that many moons ago he uttered a phrase to a jabroni that changed the world. He said he would lay the smack down. Now SmackDown is what it is today.

The Rock called King Corbin “a broke ass Burger King on crack.” They’re live on Fox. The Man and “Cracky” got another mention and then he said, “Finally The Rock has come back… home.”

King Corbin stopped him and said this isn’t his home anymore and now he’s the Great One and it’s not Rock anymore. He told The Rock to know his role and shut his mouth. Then The Rock told Corbin that he’s not really a king and he looks like a “35 year old virgin hanging around a comic con.” He said Becky Lynch is The Man, but you don’t see her “walking around holding a pair of testicles, do you?”

Then Becky said, “If I did they’d be a lot bigger than yours.”

Corbin insulted the Lakers and then The Rock said Corbin thinks he’s superior to The Rock and asked him if that’s what he thinks. Before Corbin could answer, Lynch yelled, “It doesn’t matter what you think!”

The Rock then called Corbin a badass. Lynch said “like a super tough dude?” and he engaged the audience by getting the crowd to chant “STD” at Corbin. Maybe that one will stick.

The Rock said that Corbin was about to get his monkey ass whipped by himself and The Man. Then Lynch and Rock laid the smack down on Corbin. Rock hit some punches and Lynch hit a leg drop followed by a People’s Elbow and a Rock Bottom.

The Rock said he loves SmackDown “if you smell what The Rock is cookin!”

Flair and Banks started it out and then Sasha ended up out on the floor. Charlotte Flair started gloating and they threw her off the top to the floor as well.

Flair hit Bayley with a knee and tagged in Becky Lynch who ran Banks off the apron before turning her attention to Bayley. The Man hit a Becksploder Suplex and a leg drop off the second rope for a two count.

Flair took the tag and hit a backbreaker and Natural Selection, but Banks broke up the pin. Then Becky and Sasha do some hockey punches and they pair up with Charlotte and Bayley getting involved.

Flair hit a suplex on Bayley and Becky kicked Banks down before hitting a missile dropkick off the top. Then Flair hit a moonsault on both Bayley and Banks on the outside.

Flair threw Bayley back in the ring and locked on the Figure 8 for the win.

Erin Andrews was backstage and she did a promo with the New Day. She said Kofi is “challenging” Brock Lesnar for the WWE Title. She seemed very confused as she talked too like she knew she effed up. The New Day continued and didn’t acknowledge it like pros.

They showed Kurt Angle and Mick Foley in the crowd.

Before the match started, a Firefly Fun House played. Wyatt introduced everyone to his home and his special friends to SmackDown. Ramblin’ Rabbit was wearing a Rollins shirt and said he’s Rollins’ biggest fan. He warned him not to get in Hell In A Cell.

Then Bray said they’ll show him what’s going to happen at Hell In A Cell. They had Ramblin Rabbit in a red cage, yes the god-awful red cell is coming back. Ramblin Rabbit was facing Mercy The Buzzard and Mercy ate him. There was stuffing everywhere. Far too much stuffing for one Ramblin Rabbit.

Bray thought it was hilarious that Mercy killed Ramblin Rabbit again. Then he said to Seth that history has a horrible way of repeating itself. Now it’s Seth’s turn… “See you in Hell!”

Hulk Hogan and Ric Flair were at ringside and then the match started.

This match hardly got started before the lights went out and Wyatt showed up to take out Rollins.