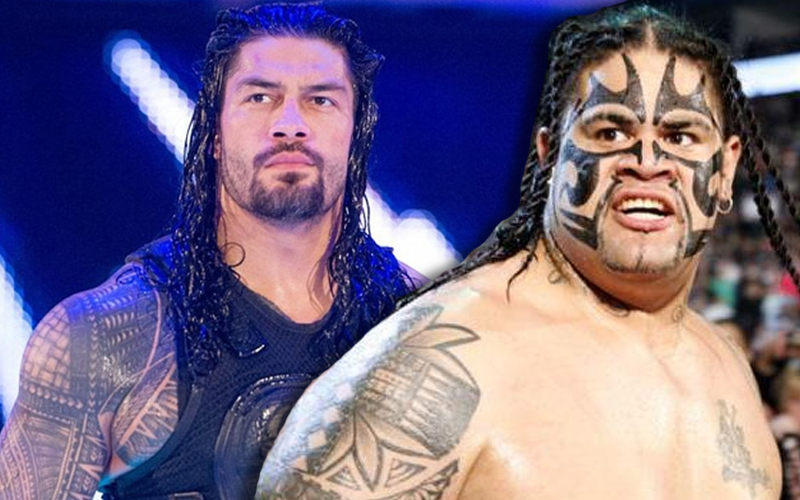 Roman Reigns’ tattoos are a part of his character and Samoan heritage, but he didn’t get them all at once. It turns out that Umaga was incredibly influential in his ink.

While speaking to Inked Magazine, Roman Reigns explained the process of how his tattoos came together. His first piece was just a basket weave design on his shoulder that he got while playing football in college. The Usos used to make fun of him and call it Roman’s “shoulder pad.”

Then he explained how a majority of the ink that he eventually got was inspired by Umaga who was able to hook him up with the right artist.

“It all revolves around our cousin Eki – Umaga. At the time, he was a big WWE Superstar and he passed away way too early, but he was the one that was the fuel behind us getting tatted up. He had this lady back in Pensacola that was kind of hooking him up, giving him a little bit of a discount here and there, and he was getting a lot of work done at the time. He was just showing her different prints and trying to give her the heads-up of our culture, and the customs, and the patterns, and the sequences that kind of fit and how they mold together.”

Umaga passed away far too soon in 2009. It’s hard to believe that it’s been a decade since we lost the Samoan Bulldozer.

Once Roman Reigns figured out what kind of tattoos he wanted on his arm it was all about getting that work done. The bad part is that he was a WWE Superstar at the time so he had a very busy schedule that did not permit him to do much healing after getting such a big tattoo.

“When I did the arm I did it Wednesday, Thursday, and I was back out Friday. I literally flew out that Friday and was wrestling. We did a Shield six-man [tag team match] against Sheamus, John Cena, and Randy Orton, and at the time Sheamus was rough in there. It felt like he was killing my arm. I had to Saran-Wrap the whole arm and then throw Under Armor sleeve over it, and luckily it worked because, we were in the Shield, you know, the tactical outfits. But yeah – it was a crazy week, for sure.”

Roman Reigns’ tattoos are likely to be seen on much bigger screens eventually as the acting bug has already bit him. This means he might eventually spend some time in a makeup artist’s chair getting his tattoos covered up for a role.

We’ll have to see where Roman Reigns’ career takes him next, but he’s still tattooed and ready for war inside the WWE ring at this point in his career.