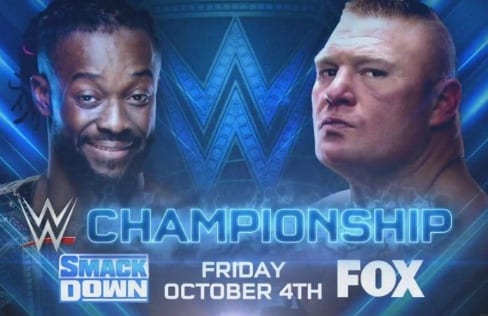 As seen on Sky Bet, the betting odds for Kofi Kingston vs Brock Lesnar on the first SmackDown on FOX have been released.

Ever since Brock Lesnar challenged Kofi Kingston to a match for the WWE Championship, a lot of fans have been anticipating that Kofi’s reign with the belt is on the verge of coming to an end.

Kingston was able to capture the title from Daniel Bryan back at WrestleMania 35, whereas Brock Lesnar is coming off the back of losing the Universal Championship to Seth Rollins at SummerSlam.

In terms of the odds, Kofi fans are right to be concerned as he is currently a huge 9/4 underdog to retain his championship. Lesnar, on the other hand, is a clear 1/3 favourite to walk away with the WWE Championship.

This is a match that we’ve actually seen take place in the past, back at Beast in the East 2015. On that night Brock was able to dispatch of Kingston in under three minutes, and he also put Xavier Woods and Big E down with relative ease, too.

Obviously this time around we would expect things to go a little bit differently, and you’d have to imagine that Kofi will be a lot more competitive.

Either way, this is one hell of a championship match to get started with the new FOX era, and there is reason to believe that both men can pull the win out of the bag – contrary to what the aforementioned odds may suggest about Brock Lesnar’s dominance.