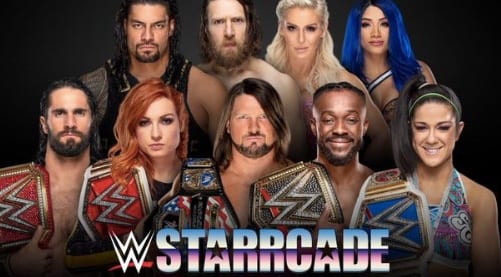 After some speculation over the future of the event, WWE has confirmed that Starrcade, the iconic WCW pay per view, will be returning in the form of a one-hour special to the WWE Network once again.

After a few successful Network features in the past few years, some fans have questioned whether or not WWE would go all in and have Starrcade be an actual pay per view event. For now, though, it’ll just be interesting to see what kind of production the company puts on for it.

It’s been a day or two since news broke that Starrcade could return, and it appears as if WWE wanted to get out ahead of it with the following press release.

Starrcade will air from the Infinite Energy Center in Duluth, Ga. The in-arena program will begin at 6:30 p.m. ET. Tickets will be available at www.infiniteenergycenter.com on Friday Sept. 27 at 10 a.m. ET.

The iconic Starrcade event triumphantly returned in 2017 after a 17-year hiatus with a pair of intense Steel Cage Match victories for AJ Styles highlighting the last two years’ shows.”

One of the biggest questions of all is: will Kofi Kingston still have the WWE Championship by the time this show rolls around?/